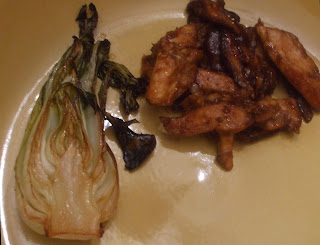 Sunday was one of those days.  A lot of days are those days, but Sunday was much more of one.  I was tired and weird, and I took a nap and woke up from the sort of low-grade anxiety dream that has my heart racing over laundry and shopping and neglect.  So at 3pm on Sunday I stumbled downstairs and said, "Don't we normally have someone over for dinner on Sundays?  I don't have any food.  I'll call her."  And I did and I picked her up and we headed to Whole Foods, me with a lame weekly shopping list and her with a plan for dinner.  "Asian."
What the hell does that mean?  Years ago, sous chef Brian and I decorated our bedroom "Asian" meaning that in addition to the paper lamps, we had his swords hanging and a Chinese restaurant calendar on the wall. We were young.  We watched a lot of Trading Spaces.  So this is "Asian" in the sense that it includes vegetables my mother has never purchased, and things that come in jars and bottles in That Aisle of the grocery store.
She didn't say, "Oh, we'll make 'Asian' food," she actually said, "bok choy and grilled chicken with something like hoisin and peanut noodles and steamed wontons...do you have any black vinegar?" and honestly, my mind started to drift at this point but it sounded like a lot of things.
And then she crashed.  The girl with the plan was sick, on my couch, and I had a lot of scallions and shiitakes.
I usually saute my bok choy all cut up with some garlic and oil, and Brian isn't a huge fan.  I think it tastes like if onions and spinach had a baby, but something about it isn't what Brian is into.  So this time I cut it in half, sauced it up, and roasted it.
I sauced it up with some oil (safflower) and mirin and tamari and red pepper.  Sweetish with a hint of hot.  I turned the oven to 400 and laid it out.
It spent nearly an hour in there - and this felt pretty flexible.  I could have taken it out 15 minutes earlier or later.
And slaw.  In the excitement I failed to pick up wonton wrappers, but I had two heads of cabbage, so I sliced up half of each and made a sauce of rice wine vinegar, brown sugar and salt.  I tossed it and threw it in the fridge.  I make this pretty often, though usually in the summer, and it's fairly awesome.  It improves over time.  You can shred in carrots and broccoli stems and slice in green beans and all sorts of things.   Tonight, just cabbage.
And the shiitakes.  I sliced them and threw them in the leftover bok choi sauce, then in a frying pan on low for nearly 30 minutes, stirring when I felt like it.
And chicken.  The first thing I did was start marinating the chicken.  Two breasts in a zipper baggie with three tablespoons of hoisin and two tablespoons of rice wine vinegar.   Once everything else in the kitchen seemed under control, I put the chicken in a medium-hot pan and flipped it occasionally.  I really didn't want dry chicken strips, so only when it was almost done did I slice it up 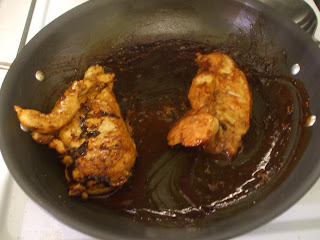 I gave it a few more tosses around the pan and the sauce once it was sliced, and added in the mushrooms (no photo, oops!). 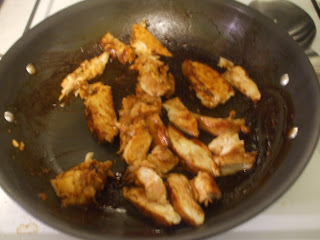 Here's the bok choy - all roasty.  The leaves crisped and withered to deliciousness and the base of it had softened and gone a little bit sweet.  It tasted like a very mild onion. 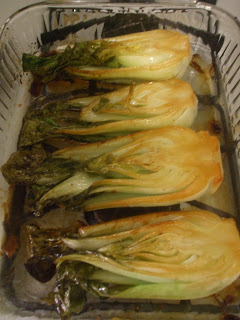 So here's dinner.   The peanut noodles didn't really make the list here because I opened a jar of peanut sauce, poured it on linguine with some red pepper flake and scallions, and um, it wasn't awesome.   It was gritty and weird.   A reminder to make your own sauce.  I'm much more likely to keep tinkering with my own food until it's right - when it comes from a jar, I'll just write it off - "We're not buying this again," and chew my way through it.
Also, it would have benefited from rice, because the chicken and mushrooms were both sweet and might have done well more balanced by something starchy, but I'm not one to make two starches with the meal and we already had the peanut noodles. 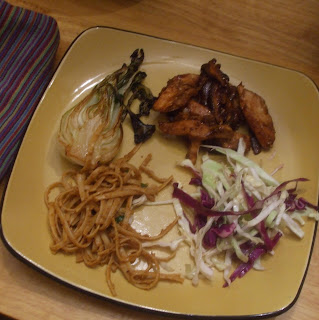 And our friend had toast. 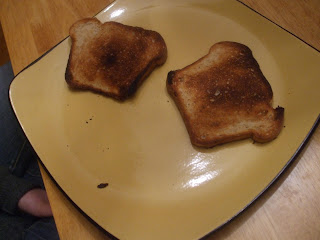 This would have served three nicely, with plenty of bok choy and a fridge full of slaw to get you through the week.
Also, I tagged this vegetarian, even though I'm fully aware chicken is meat.  There are three veggie "recipes" nestled in this dinner.
Have questions, complaints or suggestions? Email me.
Simplified Recipes
Slaw
1/2 head red cabbage
1/2 head green cabbage or napa (I think napa might be a summer thing)
Optional - other veg, shredded
1 1/2 tbsp vinegar (I used rice wine vingar, ran out and supplemented with apple cider - it worked)
1 tsp brown sugar
1/2 tsp salt
Toss it all together and refrigerate - edible in 30 minutes, better after a day
Bok Choy
Two heads of bok choy, sliced in half
2 tbsp tamari or soy sauce
2 tbsp mirin
1 tbsp rice vinegar
1/2 tbsp oil (I used safflower, but peanut might rock, or chili and skip the next step)
1/2 tbsp red pepper flakes or chili sauce
Coat the bok choy in sauce, roast in hot oven (400) for 45 minutes to an hour, starting cut side down, flipping midway
Chicken
2 boneless skinless breasts
3 tbsp hoisin
2 tbsp rice wine vinegar
Marinate briefly - I did about 30 minutes, this is a thick, sweet sauce - and cook on medium til about done, slice and toss around the hot pan a bit until really done.
Mushrooms
12 shiitakes, sliced
Toss in bok choy sauce above
Cook on low, with remaining sauce, until delicious, add to chicken