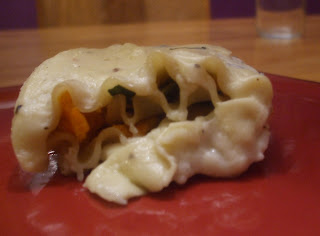 I committed to doing some cooking in advance this weekend.  Cooking for lunches during the week, cooking for the freezer for some night when I feel less like cooking, cooking for the sake of cooking.  There's just two of us, and so making up a pot of/pan of anything means there are going to be leftovers, and I'm not one to eat the same thing more than a few times in a week.   So when I make something that takes more than a weeknight's worth of effort, I cook up a full pan of whatever it is, reserve two servings and freeze the rest.  Then our lunches this week can be something we haven't eaten in several weeks, rather than whatever we ate last night.


This is a particularly effective policy for something rich, like a butternut squash lasagna enrobed in buttery sauce.

This is one of few things I do with butternut squash.  I generally don't like sweet entrees.  I refuse to put brown sugar on sweet potatoes.  Carrots are an ingredient, not a dish on their own.  You get it.  So the squash gets balanced out by the cheese and the sage and the chard and it doesn't overpower the dish with sweet.
I saw a picture of a "lasagna roll up" which seriously sounds to me like something only found in Family Circle Magazine circa 1987, but then realized how easy to store the individually portioned "rolls" would be.  I've made plenty of butternut squash and sage lasagnas, but this was the first of the rolled variety.
So you want to start with a butternut squash.  Honestly, what you want to do is start with butternut squash cubes.  But I started with a butternut squash.  A somewhat small one.  There are people out there who say you can peel a butternut squash with a vegetable peeler.  Perhaps that's the case for a really fresh butternut squash or some magical variety.  Mine is not the magical variety.  I find that a paring knife works best.  You risk losing some squash to the peeling process, but it works.
Cube up your squash, toss it with black pepper and into a 400 degree oven.  I don't feel like you need to grease the pan at this point.  Others do. 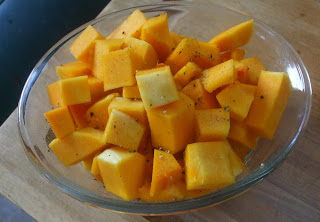 Make a bastardized bechamel sauce.   Melt butter (5tbsp!) and add in a minced shallot and some sage.   How much sage?  I don't know - maybe this is 10 leaves?  Cook on low until it's got a hint of green and smells like sage. 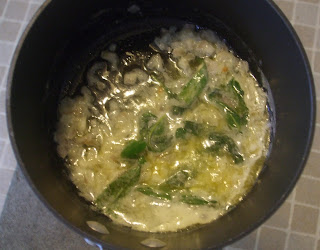 Remove the sage.  You'll use this later.  Add in 4 tbsp flour. 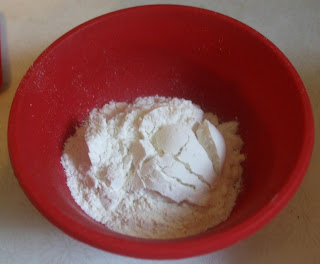 Stir.   A lot.  It'll bubble and turn golden.  Then slowly add very hot milk (I microwave it to just about boiling).  I started with 2 cups, felt confident in the texture, added the cheese and it got super thick, so then I added a third cup, stirring all the while.  But yeah, start with two, bring to a boil then down to a simmer, still stirring. Add the parm (and the extra milk if it's super thick) and salt and pepper (I used maybe a quarter teaspoon of each).  Cut up the sage you removed earlier and add that back in (I used kitchen shears).  Stir.   Turn it off when it's a good thick sauce.
There are people who will tell you to put plastic wrap right on top of it (touching the surface) if you're not using it immediately.  That sounds horrifying to me, so I just go back and stir a bit, heat a bit, stir a bit, if I'm not using it.  You want to avoid a skin on top.  I didn't get photos this time, but its the same process I used last time I made a lasagna.
When the squash is getting tender and browning a bit at the edges, take it out and puree it.  You can use a blender or a food processor.  If you have neither, cook the squash a bit longer until fairly soft and mash it with a fork.
I cooked up the other half of the sage in 1tbsp of butter until crispy at the edges 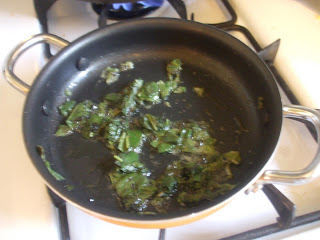 and mixed that in with the squash. 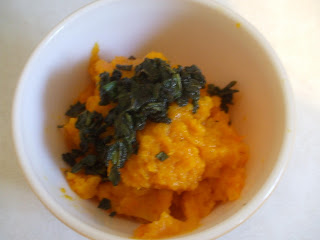 Blanch up some chard, or if you're me, defrost some chard.  Spinach works too.
Coat the bottom of the pan with the sauce. 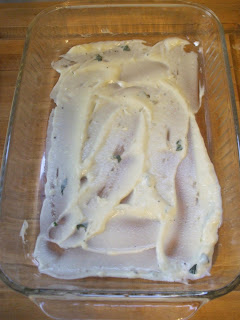 Lay lasagna out flat, spread with squash puree, sprinkle with mozzarella and add a layer of chard.  The chard somehow managed not to get photographed at all here, but I promise, it was a key player. 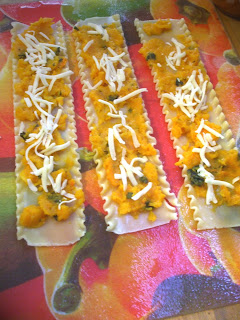 Then roll.
Set them in the baking dish. 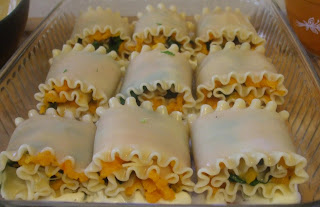 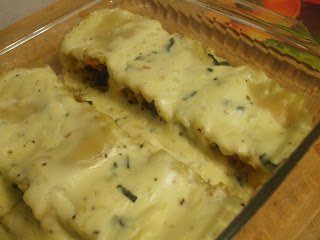 Email me if you want to discuss the merits of using 6 tablespoons of butter in one dish, or if you're tired of me claiming the crap I pull together is actually a fancy French sauce, or if you are going to make this, or have made this, or whatever.


Simplified and Idealized Recipe
12 lasagna noodles (I ran out of squash, so I used 9), boiled and drained
1 medium butternut squash (I used a small one, you can do better), peeled and cubed (maybe you want 3 cups?)
1 package of sage from the herb aisle, maybe 20 leaves, divided in halves (half cut up, half whole)
1 bundle chard, blanched
6 tbsp butter (divided - 5 and 1)
4 tbsp flour
3 cups hot milk (I used skim)
1 large shallot, minced
1/4 cup parmesan, grated
1/4 cup mozzarella, shredded
Salt and pepper
Filling
Toss cubed squash with black pepper and cook at 400 until somewhat tender, maybe 40 minutes.   Puree the squash.  Saute half the sage in 1tbsp butter, and mix together with squash.
Sauce
Melt 5tbsp butter and add in minced shallot and whole sage leaves.   Simmer 5-10 minutes and remove sage.  Add in 4 tbsp flour and stir vigorously for 5 minutes.  When thick and golden, slowly add hot milk, 1 cup at a time.  Stir and keep on low for 10 minutes, stirring continuously.  Add in 1/4 cup grated parm, dash of salt and pepper, and cut up the whole sage you removed a moment ago and add it back.  Add more milk as needed, stirring continuously.
Putting it together
Coat the bottom of your baking dish with sauce.  Lay out the lasagna noodles flat.  Spread each noodle with squash puree (I think ideally you'd have about 3 tbsp per noodle) and then sprinkle with mozzarella.  Lay on some chard and roll up.   Top with sauce and bake at 350 for 40 minutes.