Dal Makhani, sort of, and rice 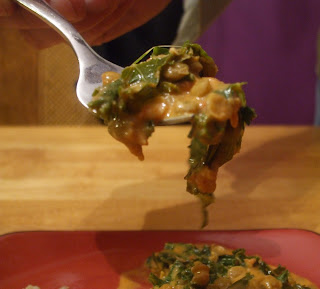 Let me preface with this, I have no effing clue what I'm doing.  I had to Google half the words in this recipe to even start.

I don't know Indian food.  I like Indian food, quite a bit, but I don't have Indian restaurants near my house, and I think, maybe, I've eaten Indian food 7 times ever.  But I like it, what I've had.  I still tend to fake vegetarianism when ordering to avoid accidental lamb consumption (just not interested, thanks) but I fake vegetarianism whenever I'm nervous about ordering the wrong thing in lots of places.  Send me to a vegetarian Indian buffet and I'm all set.

Brian, who was just a handful of years ago, afraid of tomatoes and morally opposed to mushrooms, and generally disinterested in foods he did not grow up with,  has become a fan after the three (yes, I said 3) times he's been to an Indian restaurant, and two weeks ago, he asked me to make it.

I don't own cardamom pods or cloves even.

I don't know how to cook rice.

But when I bought naan the other day, Brian was like, "I see pizza in our future!" and while the naan pizza was a good save, it wasn't the goal.  I had to go for it.

I got to Googling.  And I found this on Steamy Kitchen.   I'm a big fan of Murg Makhani, and figured I knew enough to know what I was going for with this.  And I already owned lentils, so it was decided.

So go to Steamy Kitchen for the lentils recipe, and I'll post the rice below.

Let's call the rice "pilaf" and avoid misappropriating the name of some legitimate rice dish.
I started with rice, since I suck at that.  I diced up half a huge onion and got it started in some oil 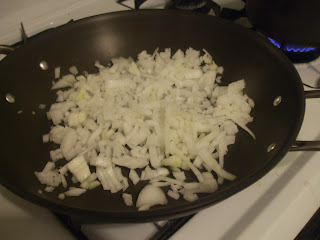 with dried spices (because that's what I had).   Nutmeg, black pepper, ginger, curry powder, cinnamon. 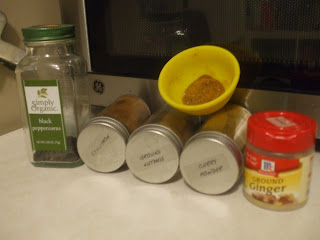 A few shakes of each, and then into the pan for a few stirs with the onions.  Then long grain rice.  Stirred around with all of that for a few, until it smelled amazing. 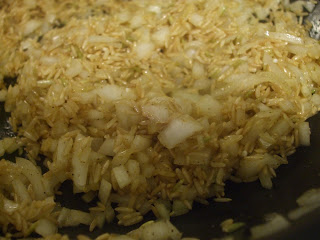 Then veg stock.  Then veg.  Here's the thing with the veg.  A few weeks ago I was rummaging through the freezer and I found this: 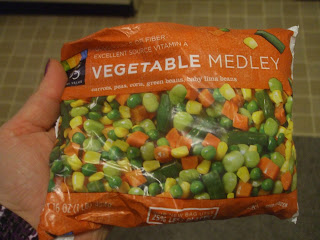 This is not something I would buy.  I like my veg separate, for one, because then I can add just corn to something, or just carrots, or just lima beans uh... no I've added lima beans to anything.  They're not my favorite.  A friend stayed with us recently five months ago and bought these, so we have half a bag.

I threw it in with the stock, stirred everything around on high to defrost and brought it to a boil, then a simmer, then covered it for 20 minutes.

Meanwhile I was making lentils.  I had green, so I used green, but several recipes I saw actually call for black lentils.  To a boil, then to a simmer, 10 minutes, then drain, mush with a spoon a bit... 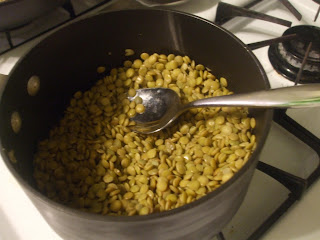 The recipe called for crushed tomatoes, which I didn't have, so I did my best to mush these whole tomatoes with the back of a spoon.  It was imperfect, but better than nothing. 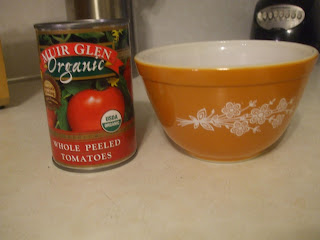 The tomatoes were added to the pot with  water and all the world's butter.  Seriously, the recipe (I doubled it for leftovers) called for 8 tablespoons of butter.  I wasn't going to do that, so I went with 6, which is still a ton of butter.   The recipe also called for 12 oz of tomatoes, and my can was 14.5, plus I added some tomato paste since mine weren't crushed.  So I figured I'd swap some butter for tomato.

I added spices, per the recipe.   Comments on it said that it was too hot, and so I toned down the cayenne a bit.  I simmered this for about half an hour, checked the rice and of course, as per usual it was not yet done.  When the sauce had thickened around the lentils I added kale.  Why?  Because I had kale on hand.  Also because I really love the rich buttery tomato sauce I've had with Murg Makhani in the past, but twice I've had leftovers at home and each time reheated it with a bunch of spinach to sort of cut the extra sauce, and it's been delicious.

Also I have this errant belief that if I put 6 tablespoons of butter in something, adding kale undoes some of that. 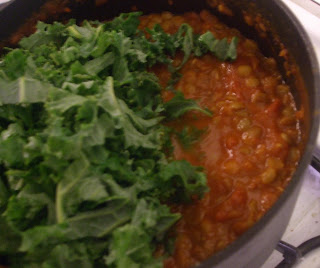 Stirred the kale in and let it hang out until it was pretty tender but still had some bite to it.   The rice was nearly done, but not quite.   I tasted the lentils and there was no heat at all, so I upped the cayenne. 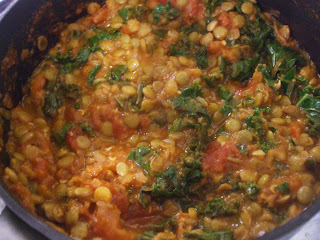 What do you do when you have 6 tablespoons of butter in a pot?  Add cream.   So I added cream.  I don't buy a lot of heavy cream - usually just when I make vodka sauce.  I also used it about a month ago in the creamed spinach.  I usually get sad when I buy cream, because it's not like you can buy a few tablespoons of it, you need to buy the whole small carton and half of that is going to waste.  Sure, I could find another recipe to use heavy cream in over the next week, but maybe we don't need to eat heavy cream twice a week. 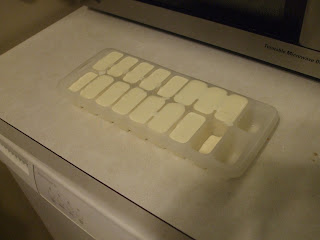 Now I have creamscicles.  The interwebs say that you can freeze heavy cream, but that it won't whip as well afterwards.  I'm not one to whip cream, so this works for me.

So I added cream and cilantro. 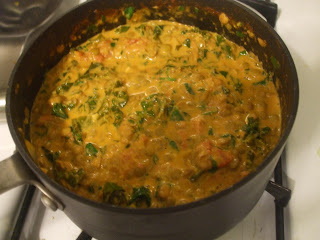 Rice is done.  Or at least, texture and flavor of rice is pleasant, even if there's some extra liquid left behind. 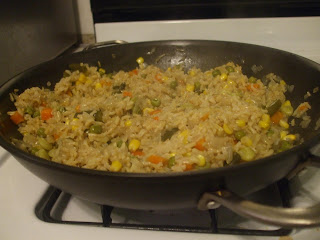 I threw some storebought naan into the oven for a couple of minutes.  Yes, I could totally have made my own naan.  Here's a recipe I've never tried.  I'll make it next time.

The verdict?  The lentils were tasty, but not quite as rich and punch-you-in-the-face-flavorful as most dishes we've had out.  I know I cut the butter, but I think it needed more spice as well.  It was good, but if you've had this sauce before, you'll know it's missing something.  If you haven't had this sauce before, by all means, make this.  It's good.
The rice was fairly spectacular.   Everything together was better than each part, the rice complemented the lentils nicely, and nothing wrong with mopping up that butter sauce with some naan.   We'll do it again.  This made eight servings. 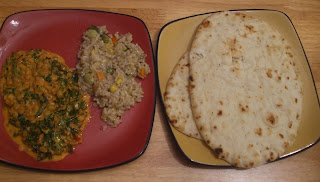 Here's the link to the lentils again, rice below.

Upset about two buttery dishes in a row?   Certain I've mispronounced the name of this meal?  Have a tip I should post on here? Email me and we'll discuss.

1 and 1/2 cups long grain rice (or basmati, but that needs to be rinsed and soaked)
1/2 large onion, minced or diced
3/4 tablespoon of spices composed of sprinklings of ginger, nutmeg, black pepper, curry powder and cinnamon.
1 and 1/4 cups diced  veg (carrots, peas, corn, green beans, lima beans - or you know, veg you actually like)
1 and 1/2 tbsp oil


Heat oil in a saute pan and add in onion and spices.  Move around so the spices don't burn.  Add uncooked rice and toss to coat, let cook for 5 minutes stirring often.  Add 3 cups veg stock and diced veg and bring to a boil.  Turn down to a simmer and cover undisturbed 30 minutes.  Check and let cook longer if necessary.  Fluff.