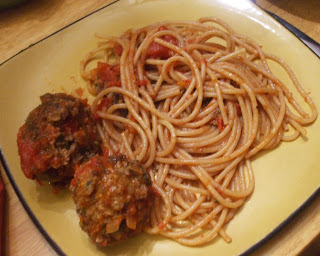 Spaghetti and meatballs.   Something about it sounds so just thrown together.  Like a weeknight meal you wouldn't make for company.   But it was Sunday, and we had a dinner guest.   Oh, I should tell you - I asked her, "Hey, since I reference you in all my Sunday posts, is it cool if I use your name on the Interwebs?"  And she's all, "Yeah, I mean, that's fine and all, but it'd be more fun if you kept me a mystery."  So we had our mysterious dinner guest on Sunday, and made spaghetti and meatballs.   It was time intensive, making sauce, meatballs, bread, and totally worth it, even if in the end, it was just spaghetti and meatballs.
This is my winter sauce.  Summer sauces include real tomatoes.  Winter sauces include canned tomatoes.  I want to say "tinned tomatoes" but I'm not in the least bit British, so I can't.  But "tinned" sounds more like the out-of-the-can flavor than "canned" does.  Canned tomatoes taste "tinned."  So we cook them a while and we brighten them up with fresh flavors and we really work to untin them.
I started with one of sauce and one of "fire roasted" diced.  The "fire roasted' adds a little bit of smokiness and some extra depth.   Actually, wait, I didn't start with tomatoes.  I started with the other veg. 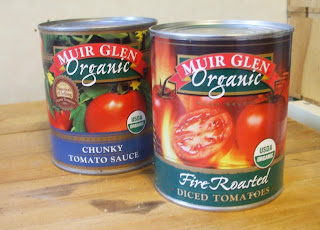 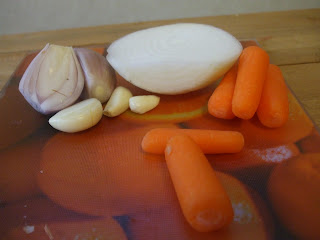 I diced up the onion and shallot and got it started in a sauce pan of olive oil (1.5 tbsp) and minced in the garlic and carrot.  Ok, I used my garlic mincer for both.   Sous Chef Brian and I were mincing in the garlic and I was like, "think the carrot will work?" and he doubted me, but was interested, and we tried it. 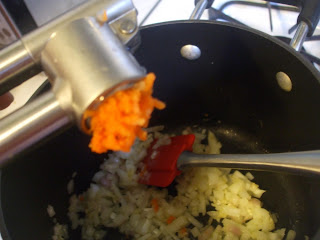 It worked way better than the time we tried to shred a bell pepper.  I support this method.   But of course, if you don't have a garlic press you could use a microplane or other grater, or just chop the hell out of it.  Also, I've had really crappy garlic presses that wouldn't have survived the carrot.  This one is from Ikea, of all places, and is far sturdier than a Billy bookcase.
I got the garlic fragrant and the onions translucent 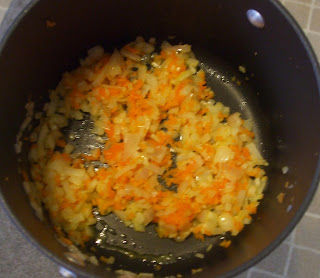 and added in the two cans of tomatoes.
There are some limitations to what you can do with one free hand.   One thing I bet you can't do is pour wine from a glass into a pot and snap a picture of it.   Go ahead.   So maybe add a splash (optional) of red wine.
And pull a parmesan rind out of the freezer and drop it in.  This adds saltiness and richness. Maybe use some actual cheese if you don't have a rind. 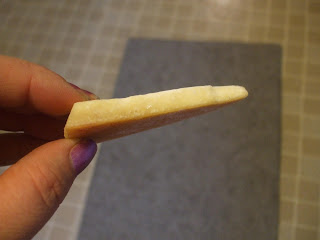 And drop in some herbs.   I used about 1/3 cup of frozen oregano from the CSA this past summer and four cubes of basil, but if you have fresh herbs, so go to town. 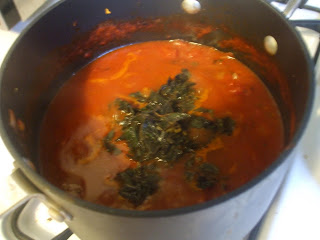 Now leave this at a simmer for a good long while, going back to stir, to taste, to give it a dash of this or that.   Meanwhile, bread.
I got to Googling.  Recipes for French bread are pretty much all the same, at the level of detail to which I'm going to follow a recipe.  I did a packet of yeast, a cup of water, 3 cups of bread flour, a bit of salt and sugar, and some olive oil.  Knead, rise, shape, rise, bake.  Several recipes had a third rise in there, but there are limits to my patience.
I actually didn't get bread process photos, I think I was too wrapped up in sauce and in not bumping into Sous Chef Brian while he made the meatballs. It's not a big kitchen.  Imagine the dough is off somewhere, rising, and let's discuss meatballs.
Back in the day, when we ate a lot of meatballs and baked ziti and lasagna (because it's what I knew how to cook), Brian started making meatballs.  I mock him for it here.  He uses a combination of the recipe I grew up with and Alton Brown's techniques.   I think this was because we got his mother's recipe, and tried it (hers were "cook them in the sauce" meatballs) and had little success.  Rather, we had tasty meat sauce, but no meatballs. I grew up with pan fried meatballs, and we both prefer the baked variety to the other options.
So here it is, and of course, I'm going to make something up when I put in the measurements at the end of this post, because we don't measure meatball ingredients.  This is 1 pound of meat (we used bison, but whatever, you can use beef or some unholy combination of things).  Plus spinach (thank you Alton Brown) and an egg and some tomato sauce (literally stolen from the pot if it I was making tonight) and herbs and spices.  Onion, garlic, red pepper, salt and pepper, oregano, etc.   No cheese. 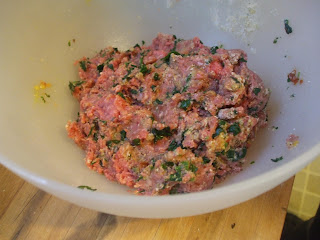 And here it is all balled up. 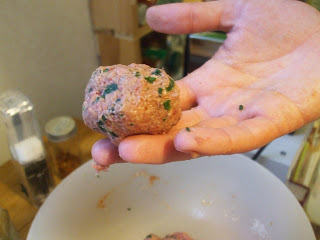 How big should it be?  Maybe 2 inches in diameter? How big is your mini-muffin tin?   Seriously, that's how we bake them because that's what we saw on TV.  You make the meatball the diameter of the muffin well, and place it in, such that it is suspended above the bottom of the tin, and any drippings can leave the meatball and collect in the bottom.
The meatballs go into the oven at 375 with the bread.
You could, of course, skip the meatballs and still have sketti and bread, or use spinach balls, which we do pretty often.   It's a lot like this recipe, but with cheese and more spinach and egg and no meat.  Skip the muffin tin, because they'll stick.
Remember the bread?  It's rising, off in the distance somewhere.  I mixed the ingredients together, kneaded it, formed it into a tight ball, let it rise about an hour, punched it down and kneaded it some more, formed it into a loaf and let it rise 25 minutes.   Here it is: 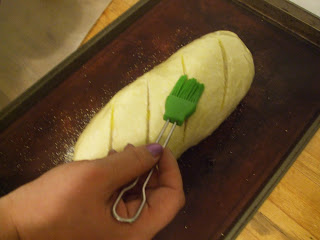 I brushed it with olive oil.   Many recipes (most?) called for an egg wash, but I wasn't going to fuss with all that just for a shiny appearance.
Meanwhile, I was going to want something to dip it in.   I microplaned our last two cloves of garlic.  Two notes:
I added red pepper flake and a good bit of olive oil and I gave it 15 seconds in the microwave to get the garlic going a little bit, then set it aside until dinner was done.
I stared at the pasta pot and willed my spaghetti water to boil.
About 25 minutes after putting the meatballs in, they were done.   Slightly crispy on the outside, still springy.  We used a spoon to dislodge them. 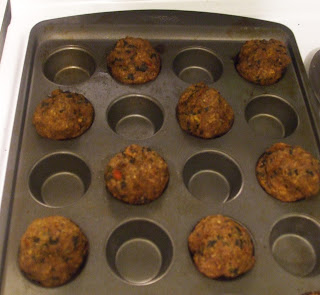 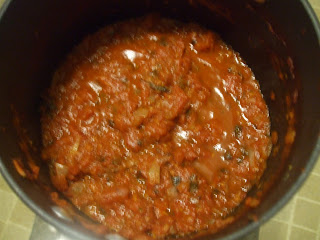 and there was more than I needed so I packed some of it into jars for the freezer.   Let it cool before you freeze. 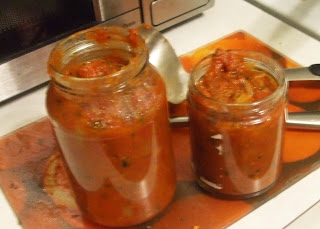 We put the spaghetti and meatballs into the remaining sauce and gave it a toss around.
And the bread was done.  Slightly golden on the outside (sure it'd be more golden with an egg wash) and really super-soft inside.  I think this was the first time I used all white (bread) flour in a loaf, and whoa is it soft.  I didn't want to mess with the recipe as this was my first Italian-shaped French bread loaf, but next time I'll get my whole wheat in. 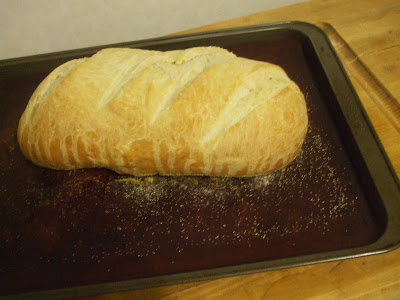 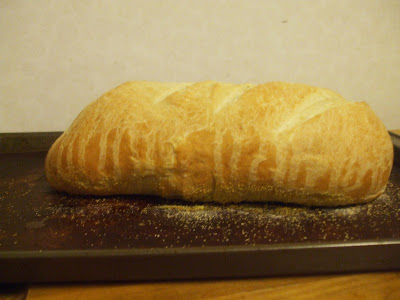 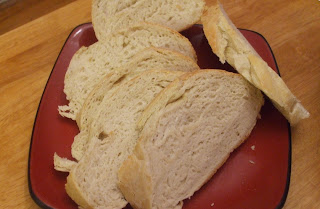 There were three of us, and we each had about two slices of the bread, leaving a little over half a loaf to freeze.   Wrap in foil and then seal up in a freezer bag.

Dinner.  Spaghetti, meatballs, bread, dipping sauce, red wine and a salad not pictured because seriously, it was lettuce and radishes.   You know how to do that. 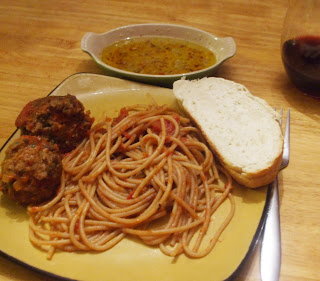 This was dinner for three, four lunches and a frozen half loaf of bread.
Email me to tell me this isn't real Italian (or French, or whatever) bread, or to discuss the merits of dipping sauce versus garlic bread, or whatever.

Simplified Recipes:
Winter Red Sauce
One can "tomato sauce"
One can "fire roasted diced tomatoes"
1 1/2 tbsp olive oil
1 huge shallot, minced
1/4 of a huge white onion, minced
1 carrot (or the equivalent) minced or grated
3 cloves of garlic minced or grated
1 Parmesan rind or cheese equivalent
1/3 cup oregano (fresh or frozen)
4 tbsp minced basil (I use the frozen cubes)
1 good splash of whatever red wine you're drinking
Black pepper
Get the veg going in the olive oil, and add the canned tomatoes.  Add herbs and spices and wine and simmer low for as long as you can, 2 hours is great.   Remove parm rind at the end.
Fluffy "Italian" Bread
1 packet active dry yeast
3 cups bread flour
1 cup warm water
1 tbsp sugar
1 tsp salt
Cornmeal for dusting
2 tbsp olive oil, plus some for brushing on and greasing a bowl
Proof the yeast in the water with the sugar, add in the rest of it, mix then knead into a tight smooth ball.  Place in an olive-oiled bowl, cover and hide somewhere warm (I either use my china cabinet, or if I'm worried about rising I put it in the basement near the heater).  After an hour, when it's about doubled in size, punch it down and shape it into a loaf on a cornmeal-dusted baking sheet.  Roll it tight and be sure the seams are well sealed.   Let it rise another 20-30 minutes.  Score it with a knife on the diagonal a few times, and brush with olive oil.  Put it in the oven at 375 for 25-30 minutes until it starts to turn golden and has a hollow sound when knocked.
Dipping Sauce
1/4 cup olive oil
2 cloves garlic, minced
1 tbsp red pepper flakes
Heat for a few seconds (15?) in the microwave and then let sit for an hour while you make other things.  Dip bread in this.  Rejoice.
Baked Meatballs
1 lb ground meat (bison, beef, or whatever you use)
1 cup defrosted and torn up spinach (fresh is ok too)
1/2 cup bread crumbs (more as needed)
1/4 cup - 1/2 cup sauce (as needed)
Herbs and spices - red pepper, onion, garlic, oregano, salt and pepper, etc.
Roll into smallish balls (2inch diameter?) and lay out in mini-muffin pan.  Bake at 375 for about 25 minutes.
Posted by Rose