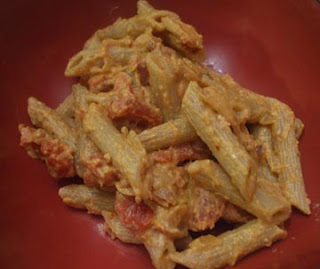 This is exciting. You should make this and eat it.   You should not tell people (non-vegan people) that it's vegan until after they're wow-ing about it.

I was apprehensive about trying to do a non-dairy cream sauce.  I'm trying to expand my repertoire of vegan recipes, not because I'll ever go cheese-free, but because you never know who you're going to end up cooking for.  Actually, I do know, one of the friends I cook for (used to cook more for, got lazy, I suck) is vegetarian and dairy free, and frankly, eggs aren't exciting enough to me to call her anything but vegan.  So I like to try different things and see if we can get by without milk.  But this dish isn't about getting by, this dish rocks and I don't see a reason to make dairy cream sauce again.

Anyhow, back to my apprehension.  1.  I like cheese and stuff and 2.  I tried to use the cashew cream a couple of days ago and it's was disgusting.  I mean like, spit-it-out-and-try-to-forget-it-ever-happened disgusting.  But maybe that's because I tried to use it raw in a cold sauce, in lieu of sour cream, because this time, again, fantastic.

So we start with the cashew cream.  This couldn't be easier.   Take cashews (raw) 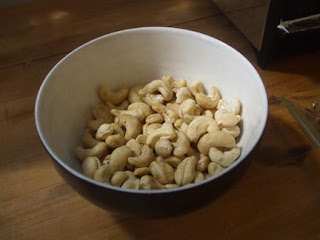 and wash them, then soak them in the fridge with some water.  The next day, drain the water, rinse again, and throw them in the blender with some new water (equal parts water and cashews). 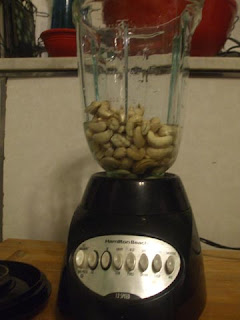 The interwebs said that if you don't have a fancy blender, you need to strain them after.  I didn't think my blender was fancy (it's a bitch with ice) but I kept blending and I got to smooth cream with it and didn't strain.  Your blender may vary.  To make cashew milk, add more water, blend until the consistency is right - but we made cream, not milk.

To make it taste like heavy cream, which is a bit sweet, I mixed in a pinch of sugar.  At this point it tasted like melted cashew ice cream.  I've never had cashew ice cream, but I have a decent idea of what it might taste like now.  So I had this in the fridge from a few days ago when I first made it.

You see a cup of nuts above, and a cup of sauce below - a cup of nuts plus a cup of water makes two cups of cream.  I used one cup in the failed "sour cream" and reserved the other cup.  So a cup of cashew cream includes 1/2 cup cashews.

I made the sauce exactly the way I would make my dairy version, except with the cashew cream in place of heavy cream and no parmesan.  I didn't add a vegan cheese substitute, because I don't know of a good sub for parmesan (I don't deal well with nutritional yeast) and sometimes non-dairy cheeses are pretty foul.  On a side note, Trader Joe's fake mozzarella is pretty good, but this isn't a mozzarella type of dish.

I started with onions and garlic in pan with some oil.  I used a clove of elephant garlic, because it's what I had on hand, but I usually use regular garlic.  Elephant garlic is sweeter and milder.  I chopped everything somewhat roughly - because this is chunky vodka sauce - but you could mince it up finely and make a smoother sauce. 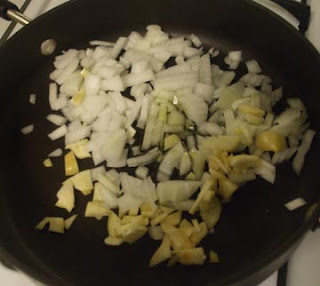 I also soaked my red pepper flakes in the vodka, because I read that somewhere, but I didn't see any advantage to that so I think that's a step you can skip.

Once the onions and garlic were getting going, I added in the vodka and pepper flakes. 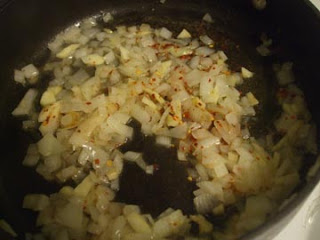 I use less than most recipes call for, I use an airline bottle, just under two ounces.

It smells like a frat party when you add it, but that smell fades quickly as the alcohol dissipates.  When most of it is gone (in like a minute) add the tomatoes. 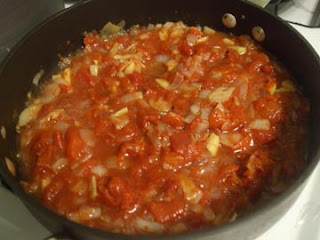 I used diced, but again, for a smooth sauce use tomato sauce or crushed.  I let this hang out with the garlic and onions and vodka and pepper flakes, stirring occasionally, for about as long as it took my big pot of water to boil for the pasta.

When the pasta water boiled, I got some penne going and went back to the sauce. I added the cashew cream and stirred it in.  It looked just like the dairy version. 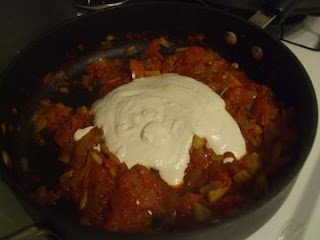 I added two cubes of frozen basil (fresh is best) and stirred it around it to melt them.

When the pasta was just about done, I drained it and reserved a bit of the liquid, added the pasta to the sauce and stirred well to coat everything.  I didn't need any reserved pasta water to thin it, but good have on hand. 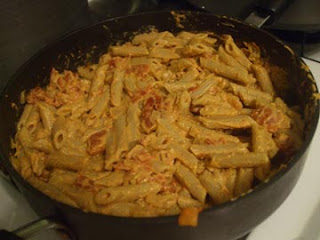 I should tell you that I had told Sous Chef Brian I wanted to do this vegan to see if it worked, but that we could top ours with parmesan once it was in our bowls.  Because, you know, we're not vegan.   But we didn't, because it didn't need it.  In fact, Sous Chef Brian had seconds.

Nutritionally, what does this mean?   I used 1/2 cup of cashews (1 cup of cashew cream) in this.  So for the cream in the entire recipe, per Nutrition Data, 619 calories, 49 grams of fat (9 of them saturated), 0 cholesterol and 20 grams of protein. Chill, this is a.  The entire pan full and b. just the cashew cream, not the veg and pasta and all.  If I had used heavy cream we'd be looking at 414 calories, 44 grams of fat - 28 of them saturated, 164 mg cholesterol, and a sad little 2 grams of protein.   So we're 200 calories over, in a whole pan full, from where we would be if we used dairy cream.  If I'd added a half cup of parmesan, which I do when I make my non-vegan vodka sauce, we'd have almost exactly those 200 back.  So I'm going to call this calorically about equal to the dairy sauce I make, with zero cholesterol and a nice protein boost.  This isn't diet food, but you're not shooting yourself in the foot for using nuts instead of dairy. With the math above, why not do it cholesterol free?

I got two cups of raw cashews at Whole Foods for about $4, so this wasn't more expensive (as long as I use those other cashews of something) than if I had used dairy cream.

This made five servings - two lunches, two dinners, plus what Sous Chef Brian went back for.  A serving of pasta is supposedly 2oz, and we used 8, so someone's getting a bit less pasta than they expected, but it's a hearty sauce.

Have thoughts on vegan substitutes that aren't super-processed and could fool a non-vegan?  Sad because I respect my cookware enough not to set my vodka sauce on fire?  Leave a note in the comments and we'll discuss.

Chunky Vegan Vodka Sauce
by Saturday's Mouse March-31-2011
This creamy, rich, vegan version might fool the omnivore at the table. Still luxurious, but without the cholesterol of cream and butter.
Ingredients
Instructions
Saute the onions and garlic in the oil until translucent. Add vodka and red pepper to a medium hot pan with the onions and garlic. When vodka has mostly evaporated, add tomatoes. Cook on medium about 15 minutes. Stir the cashew cream into the sauce. Add basil. Keep on a simmer until ready to serve. Coat penne with sauce. If too thick, add some reserved pasta water.
Details
Prep time: 5 mins Cook time: 30 mins Total time: 35 mins Yield: 5 servings
Posted by Rose