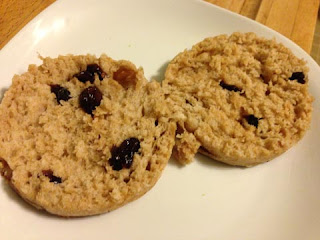 Lately, I've just been sticking cranberries into everything I cook.  I really miss fruit this winter, and I got tired of apples pretty early on.

You could make this without the cranberries, but then I'd have nothing to contribute to the literature, because there already is a perfect recipe for English muffins.  I've been trying to do this for a while.  I hinted at it 14 months ago (!)  It turns out that everyone uses the same recipe anyway, and it's Alton Brown's.   "My" recipe is *so* Alton Brown's that I'm not going to post it at the end, really, this is someone else's work.

The only changes I made were:

1. Cranberries!
2. Earth Balance instead of shortening
3. Mix of whole wheat and AP flour

I made five muffins using the aforementioned recipe, cut in half.  Really, I should have made four muffins using that much dough, and so my muffins are not perfectly round, but otherwise, it's a win.

This recipe involves special equipment - English muffin rings.
Sure, you don't have that. Who does?  I do, because I finally gave in and bought them ($4.99) after trying to create my own rings out of aluminum foil.  They did not hold up.  If you're open to various muffin sizes, you can use biscuit cutters or any other sort of ring you have floating around in your cabinet.  The internet says that you can open both sides of a tuna can and use that in lieu of actual rings, but I don't eat cans of tuna and I don't believe a can of cat food can ever truly be clean enough to eat out of.

The other thing that held me back, even though I first read this recipe a year and a half ago, was dry milk.  That's not something I keep around, in fact it's not something I've ever purchased.  It's something I was served disolved into lukewarm water the 1990s during a foreign exchange trip to Europe and I've not held it in high regard since.  Also, it's pricey.  But after wrestling with other recipes, it was the way to go.

I mentioned a video based on the same recipe - I took some tips from that as well and it's pretty well done so if you're making these for the first time, why not check it out? I don't know this person, it's just a useful video.

Let's do this then.  Remember, I cut my recipe in half and tried to get five muffins out of it, but I think you can get a solid 8 out of a full recipe or 4 out of a half.  These freeze great, but I do fork-split them first.

It's water (divided), flour, yeast, Earth Balance (instead of shortening, but your fat of choice), sugar, salt, and nonfat dry milk.  The original recipe is all white flour, but half AP and half whole wheat still gives you a nice texture.  Chewy.  Crisp on the bottom.  Not too heavy. 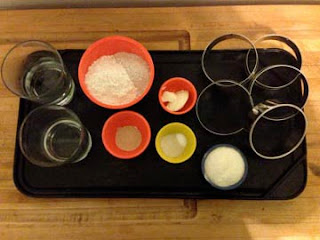 Also, dried cranberries.  I added a third of a cup for a half batch. 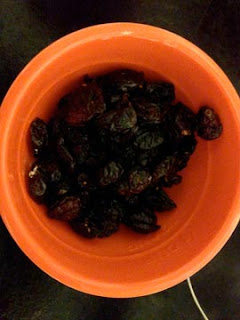 Oh yeah, also cornmeal.  This is why I don't usually try to set everything out ahead of time.  I'm going to forget something. 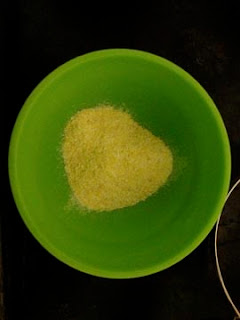 And some oil (not pictured).  I used safflower, but whatever you like.

First thing, melt that margarine.  Hot water, margarine (shortening, whatever) salt, sugar and dry milk go into a bowl and get a whisking.  Do this first so it has a chance to cool. 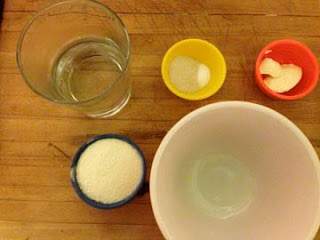 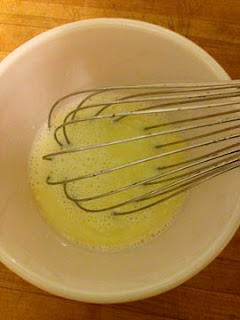 Then get your yeast going.  Warmish water (body temp), a pinch of sugar or drop of honey and your yeast.  Mix a bit and let it froth. 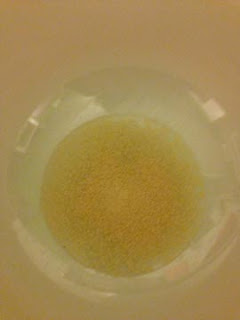 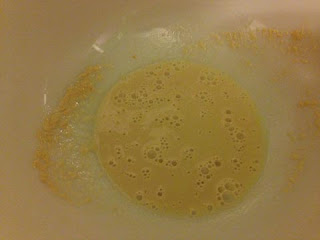 Once your milk/margarine mix is coolish and your yeast is frothy, sift your flour in and mix it all together. 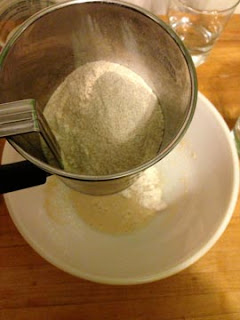 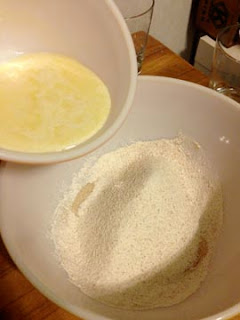 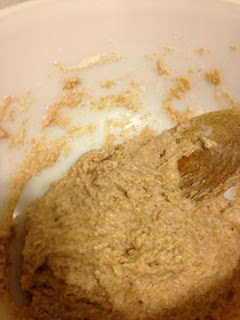 Hold off on the cranberries for now.  Mix well, cover your dough and set it to rise in the nice warm spot in your house where you set things to rise. 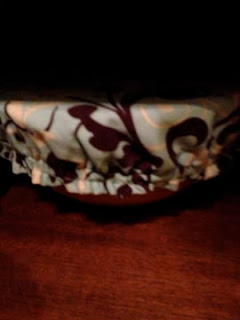 Let it go for an hour.  Alton Brown says half, but I like an hour.  It all depends on the temperature anyway.   It didn't quite double, but it loosened up and got airy. 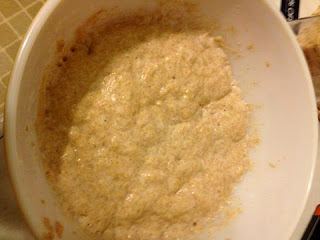 It's a pretty sticky dough.  Fold in your cranberries. 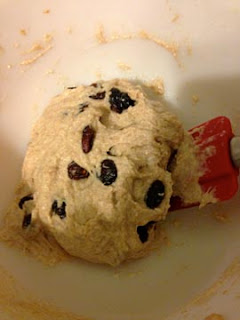 Preheat your griddle and your muffin rings on med-low. 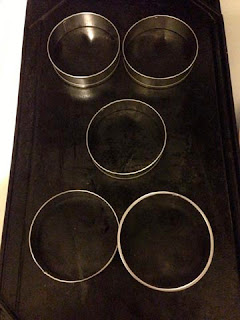 Add a smidgen of oil to each ring - maybe a tablespoon total among your four (in my case five) rings.  Sprinkle the griddle with cornmeal inside each ring. 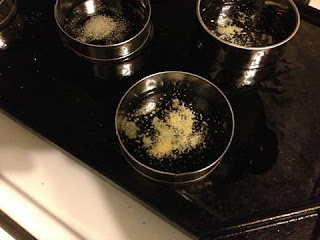 Divide your dough among your rings.  Alton Brown advises using two scoops with a #20 ice cream scoop.  I don't know about you, but I haven't had my ice cream scoop calibrated recently.  Do what you will. 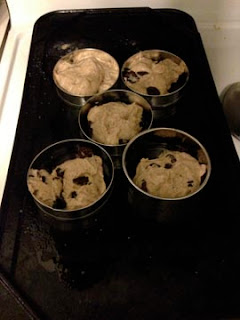 Notice how mine aren't quite full? This is why you should use four rings.  Cover with a cookie sheet or other flat piece of metal. 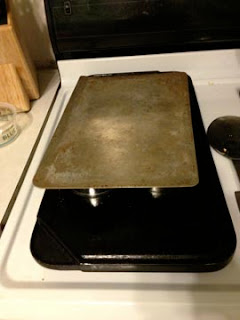 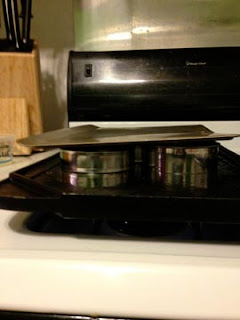 Let them cook six minutes (you'll hear them sizzling) then remove the cookie sheet and flip the muffins. 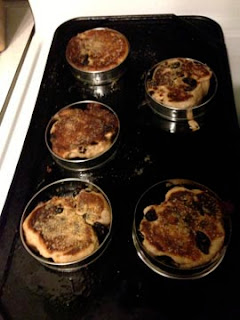 Another 5-6 six minutes and you have English muffins. 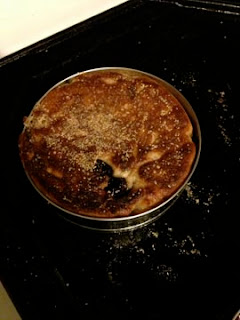 Cool on a baking rack. 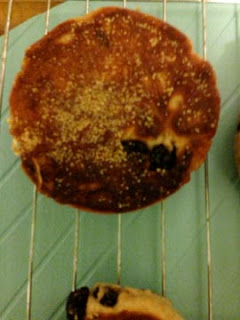 And split with a fork. 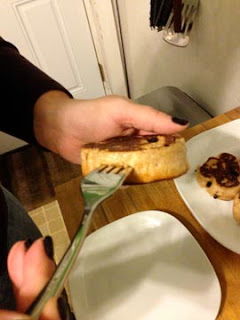 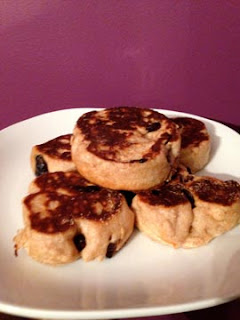 They're good as is, but better toasted.  And buttered. 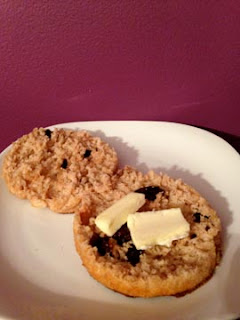 The cranberry goodness would go well with some orange marmelade, if you have that handy. I did not.

Seal them up in something airtight or split and freeze.

The whole thing takes less than an hour and a half, so homemade English muffins aren't a serious chore, but English muffins you've already made and set aside for later, those are fantastic.