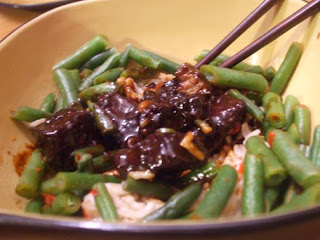 This meal happened very accidentally.  I put out a call on the Twitter to find a name for it, and @OnBlank came through within minutes.   Clever lady!

Anyhow, the other day when we made the sketti and meatballs, Sous Chef Brian was getting prepared and he said, "We have bison, but no beef, right?"  And I said something like, "There's something marked beef in the freezer, but I don't know what it is."  So his plan was to make up a big lot of meatballs, half-bison, half-beef, and then we'd have them to freeze and all would be right with the world.   He was defrosting, but I was tied up with bread and sauce and such, and then he said, "Uh, this doesn't look right."  We had a pound of defrosted stew meat and a pound of defrosted ground bison and I just threw it (the stew meat) in the fridge with the hopes that something would come to me that evening and I'd get to marinating.  It's not that I couldn't have made up beef borguignon (what my usual stew is loosely based on) but I just wasn't feeling it.  Our mysterious dinner guest was in the stew camp.   I felt serious pressure to use red meat right after the big meatballs dinner, and I didn't want to face it.  I usually make up a couple stews in the fall and early winter, and we eat them out of the freezer til we're sick of them and I didn't want to do it again.   Somehow it got away from me and I failed to marinate the meat.
And then today, my work schedule was weird and I had some midday time at home.  So before I left, I threw the stew meat into the crockpot on low with half a bottle of hoisin, some tamari, mirin, chili sauce, rice vinegar and some scallions and took off.  When I came home midday it was smelling like food, and I added a bit more liquid.   A few hours later I was back again and this was super-tender meat.  Somehow tenderer (yeah, I said it) than my typical beef stew.
I pulled out the meat and held it aside (ok, what I did is not what you'll do, I refrigerated it and it got a little bit tougher). 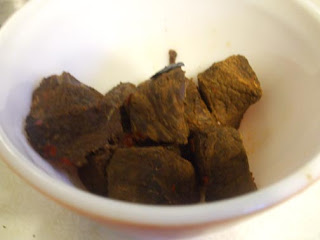 And I put the sauce in a saute pan on high to reduce.   I started making rice, which I do not photograph, because I am terrible at it. 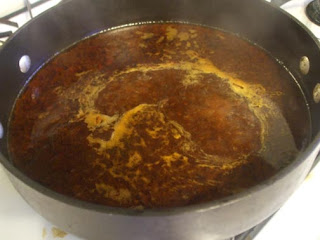 And when the sauce had turned really thick, like barbecue sauce, I threw in some chunks of shiitake.  I also defrosted some frozen green beans and tossed them with some chili sauce. 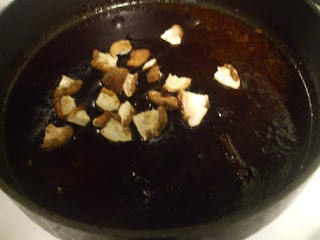 And then put the meat back in the warm sauce to coat it and reheat it. 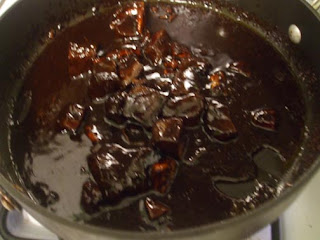 I used a slotted spoon to dish out the meat on top of the rice, because the sauce was pretty concentrated - sweet and spicy and rich - and what was on the meat was plenty.
This ended up making about three servings of the meat, because we kept picking at it while it was cooking - I bet it would have served four if there wasn't so much testing going on while it cooked.
Email me if you have other ideas for accidentally defrosted meats, or if you have ideas about the blog (should I add a comments section?  should I talk about an entire dinner at once or just one recipe at a time?  less meat?  too long?)

Simplified Recipe
Asian Stewsion
1 lb beef stew meat
1/4 cup rice vinegar
5 oz hoisin (like half a jar)
2 scallions, chopped
1/4 cup mirin (or other sweet white wine)
1/4 cup tamari
3 tbsp chili sauce (not like the ketchup kind, like the Asian kind) (divided, 2 and 1)
water
a handful of leftover shiitakes, cut into chunks (totally optional)
cooked rice
3 cups green beans (or some other veg)
Put everything except the shiitakes, rice and green beans in a crockpot on low - add enough water to just cover the meat.  Leave for 8 hours.  5 would probably have been fine, but I wouldn't go past 8 or so.
Pull out the meat.  Pour the sauce into a skillet or saute pan and dial it up to superhot to boil off and reduce.  When the texture of good bbq sauce, add in the shiitakes and meat to heat.
Steam (or defrost) green beans and stir in a tbsp of chili sauce.
Serve it all on top of rice.
Posted by Rose