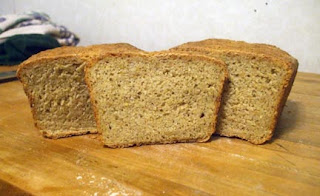 This is inspired by (Never home)maker's recipe and a bet from my mother.  Not a bet so much as a dare.
Me: "I'm going to make bread tomorrow, what kind should I make?"
Mom: "Rye."
Me: "I don't have any rye flour, and I don't like rye bread."
Mom: "What do you have, wheat?  I guess you're going to make wheat bread."
And I listed off a few of the range of breads that I had the ingredients for, including quinoa.  And she said, "Quinoa, really?"  And I was all, "Challenge accepted."

So I read a bunch of recipes, and several called for sourdough starters and powdered milk, but I do want to find a bread I can make for vegan friends too, so I eliminated any with dairy, and finally I found this recipe.  Of course, I didn't exactly follow it, but close enough.  Actually I was torn on this one - some folks claim three changes to a recipe make it yours, and I don't post recipes that are other people's, I link to them instead...   I certainly changed three things, and I'm going to post my own interpretation below, but I'd have had no idea how to start quinoa bread, if not for the existing recipe I read.  Let's think of this like a research paper - cite the original author's idea, but don't put the entire thing in block quotes.
Ok, so where to start?  Cooked quinoa.  One cup quinoa simmered in 2 cups water.   Let cool a bit.  Meanwhile, proof a packet of yeast with warm water and agave (rather than honey, to go all vegan-like with it).  Or you know, use honey and eat your food and be happy.  I had never used agave before, and by chance it was in the recipe and my parents had just given me several bottles of tequila and some agave, so I had it on hand.  I'm a fan. 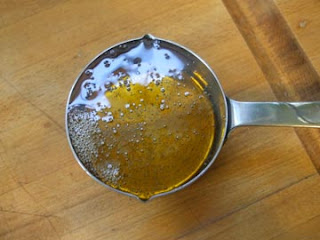 Add agave to yeast and water and flax seeds. 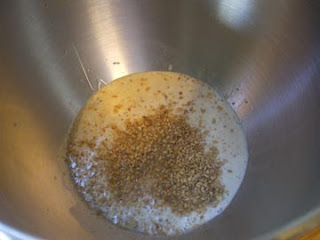 Add a cup of flour. 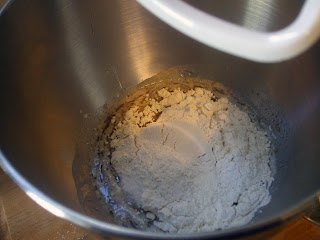 Mix until it looks like oatmeal gone wrong.  Ok, until combined. 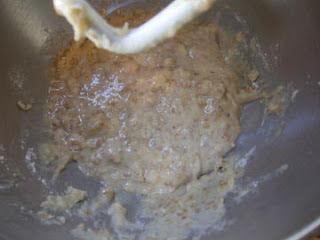 Add quinoa.  Now it's like oatmeal gone wrong with dinner on top. 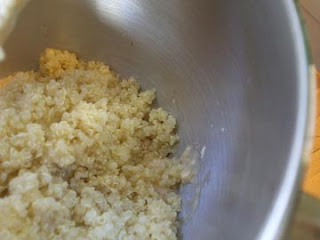 Mix to combine and we're back to oatmeal. 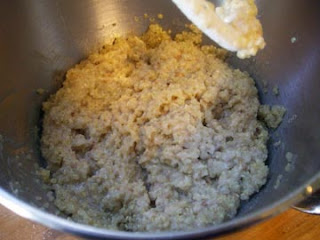 Add the rest of the flour. 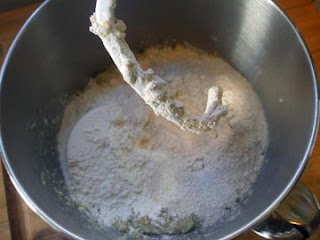 Mix until smooth.  This is where things went wrong for me.  No matter how long I mixed, I had something very shaggy.   I added more flour, still shaggy. 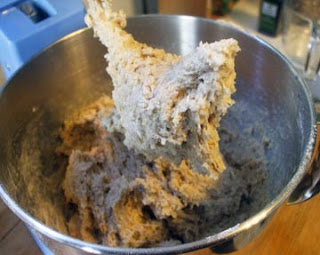 So I turned it out onto a board to knead by hand. 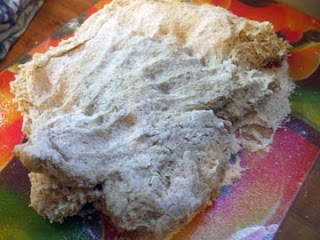 And eventually it formed a ball. 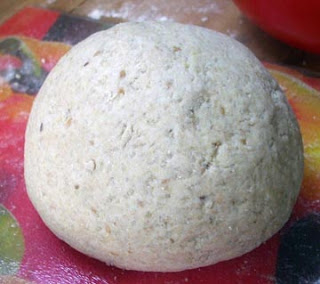 I greased that ball.  Rather, I put that ball in a greased bowl and flipped it around a bit. 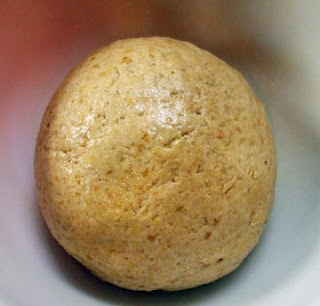 And then I covered it, and hid it in my china cabinet and let it rise. 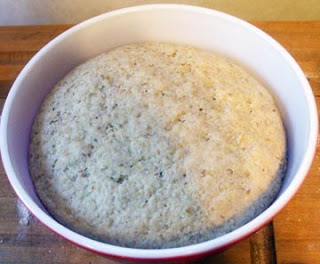 And then I punched it down, and divided it in half, and shaped it into loaves. 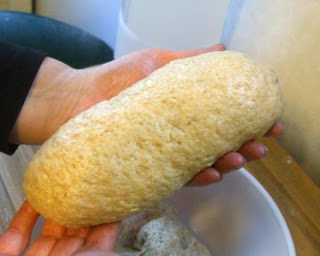 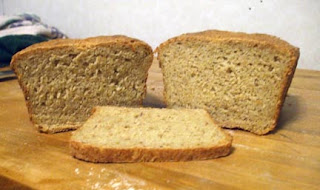 While it was baking, it smelled just like butter.  Like I was making butter cookies.  There is no butter in the recipe.  I actually got nervous that it might be too rich or sweet.  It was not.   It was dense, it's a heavy bread.  It will be great for sandwiches, but it's not a light, fluffy, meaningless bread, it's a hearty and serious bread.  It's like oatmeal bread, boosted with the goodness of quinoa.   The original recipe called for adding mustard, and noted that this made the bread optimal for savory uses...I need my bread to serve me well for a PBJ, and this is just that.
This made two smallish but sandwich-sized loaves.  The original recipe made one loaf, and I used one cup more flour.  If you're looking for a huge loaf, make one and a few rolls.
print recipe

Quinoa and Flax Sandwich Bread
by Saturday's Mouse April-18-2011
Inspired by a recipe on http://www.neverhomemaker.com/
Ingredients
Instructions
Cook the quinoa in 2 cups of water, and let it cool. Set the yeast up in 3/4 cup warm water, and stir in 1/3 cup agave nectar. Let it bubble and foam for 10 minutes. Add the flax seed and oil, and stir. Stir in the quinoa and 1 cup of the bread flour. Add the whole wheat flour and remaining bread flour and salt. Mix for 5 minutes in a mixer set on 1, or by hand for 7 minutes or so, until well combined. Turn out onto a floured board. Knead until no longer sticky, and form into a ball. Note: it's a heavy dough. Wipe the bottom and sides of a large bowl with oil, and toss the dough ball in the oil just to coat. Cover dough ball with a damp cloth and set aside to rise for 1.5 - 2 hours, until doubled. Preheat oven to 400. When dough has doubled in size, punch it down and divide into halves. Shape each into a loaf, sealing seams. Place each loaf into a loaf pan and bake about 40 minutes, until internal temperature hits 190 degrees. When done, turn out onto a board to cool. When cool, slice and freeze.
Details
Prep time: 20 mins Cook time: 40 mins Total time: 2 hour 30 mins Yield: 2 small loaves
Posted by Rose