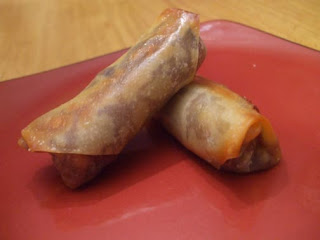 These are the egg rolls you could almost see in the Asian Stewsion post.
I like to keep egg rolls in the freezer.  That way when I don't feel like cooking anything special and I just do up a quick stir fry, I can heat up a couple of egg rolls and we feel fancy.   I will say from the get-go that yes, I see that these egg rolls look like blueberry blintzes, but in fact, they're egg rolls.  What you see is red cabbage.  You can use green too.  You can use both.  You can use whatever you want.  I had red.

Start with egg.  Drop a beaten egg (you can see I didn't beat it real seriously, it's blotchy, but this is unimportant) into a pan larger than what you would normally use to cook that egg.  You want to make the thinnest omelet possible.
I had to Google the word "omelet" several times to get the spelling right.
Use a good bit of oil for this, because you really don't want the egg to stick.  Don't mess with it, just let it cook. When it's done, remove it with a spatula.
Here's my egg:

Slice your egg into strips and set aside. 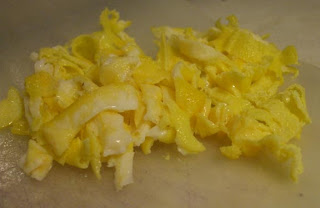 Now start thinking about filling.  I used half a head of red cabbage, a quarter of a giant white onion, some sliced shiitakes and some grated carrot.   You could add other things, but they should all be cut into very small strips.  Also, I had no garlic, and that's sad.  Use garlic. I used some garlic powder, but that's not nearly the same thing. 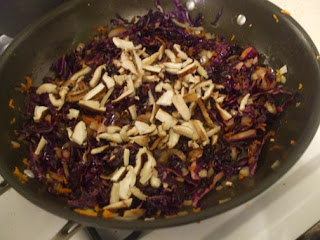 Get everything going in a pan with some oil (I used safflower) and make a sauce in the pan too - I used worcestershire in lieu of fish sauce, plus tamari and some rice vinegar.   Stop the cooking before your cabbage is totally wilted, you want some crunch here.   Mix in the egg and refrigerate. 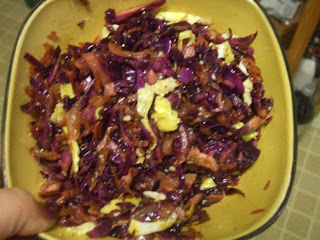 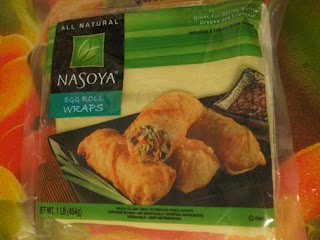 Maybe there is something better at the Asian market, but you can get this at your local Shop Rite or Whole Foods.  Ok, there is something better at the Asian market - in my experience it's at least cheaper - it's just a stack of these wrapped in plastic, refrigerated somewhere.
Set out a small bowl of warm water.  Lay out a wrapper with one end pointed towards you.  Dip your finger in the bowl and rub the two farthest edges with water to moisten.  Spoon about two tbsp of filling int the middle of the egg roll - you actually want to go slightly closer to you than "the middle" but just slightly. 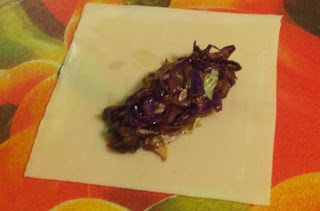 I realize my angles are all out of whack here, but picture the left side here as the bottom.  Fold the bottom corner up over the filling, and press lightly down so that corner sticks to the middle of the wrapper. 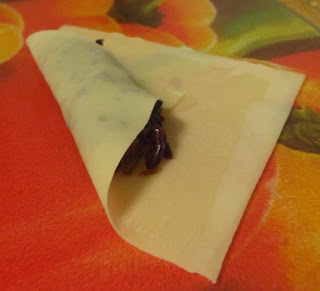 Fold your sides up over that first fold - it will look like you're making an envelope. 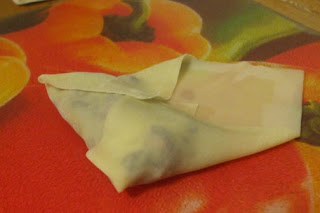 Don't make an envelope!  Make an egg roll. Take the bottom (that's the left, sort of) where all the filling is and roll it up to the last flap. 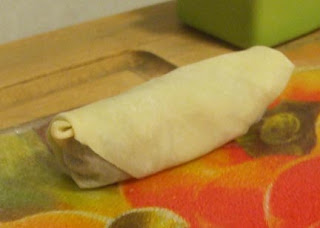 Side view:
Set out a baking sheet with a silicone mat on it.  I have a thing for silicone mats.  This one has measurements as though I'm going to make a pie.  I am not.
And keep making egg rolls until you're out of filling, lining them up on the mat. 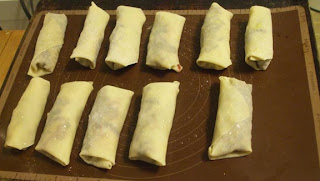 I got 10 out of what I started with - start with more if you want more.
Spritz it all with oil - if you don't have a spritzer, very barely brush a little oil onto each.  Both sides.  I used olive since it was in my spritzer, but you could make a more appropriate choice. 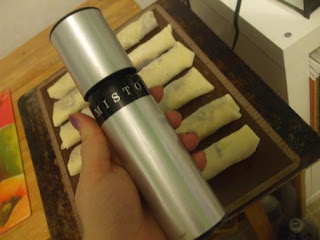 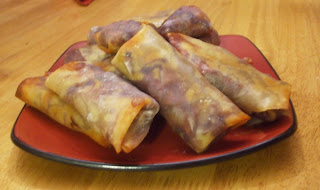 Serve with some kind of dipping sauce.   You know that stockpile of sauces you have from takeout?  This is what you were saving them for. Or make your own.
These freeze really well.  I wrap each in foil and throw them all into a freezer bag.  When I want one, I just pop it in a warm oven until it's heated through.
You can make anything into an egg roll.  I make these with chicken, black beans, cilantro and cheddar for the Southwest thing, and I just saw a link to these, Reuben Egg Rolls, which are making me drool.
It's not hard to do - make filling, cool filling, spoon in, roll and bake.  I guess you could fry them, but they get really crispy this way, why bother?
Email me if you have an idea for something awesome to stuff inside an egg roll, or if you have ideas about the blog, or if you're as obsessed with silicone mats as I am.
Simplified and Idealized Recipe
10 egg roll wrappers (or more, but then make more filling)
1/2 head cabbage shredded (red, green, napa)
1 carrot (or equivalent) shredded
1/4 large white onion diced small
5 shiitake mushrooms, cut into small strips
2 cloves garlic, minced (or powder, but you lose something)
1 egg, beaten
1/4 cup oil - divided like crazy, as in, you'll need probably that much, in several steps
2 tbsp tamari or soy
1 tbsp rice vinegar
several dashes worcestershire or fish sauce
Cook the egg on high undisturbed in some oil until you get a very thin omelet.  Cut into strips and set aside.
Freshen the oil in the pan and add in your onion and carrots, then garlic, then other veg - add sauce ingredients and saute until they're moving along but not soggy.  Aim for crispness.
Cool in the fridge until about room temp.  Preheat the oven to 350.
Lay out an egg roll wrapper, point towards you.  Moisten the farthest edges with water.  Scoop 2-3 tbsp of filling into the egg roll, near the center but slightly closer to you.  Fold the bottom over the filling, fold the sides over, and roll the the top corner.
Spritz with oil (or brush) on both sides and bake 15 minutes or so, flipping once, until crispy, not burned.
Posted by Rose