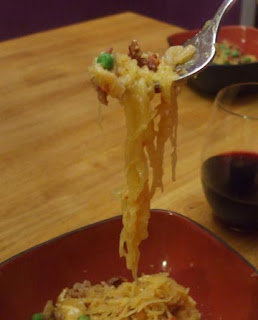 I had this peas and prosciutto thing stuck in my head, and I had this spaghetti squash, and I was like, damnit, I have to go and buy prosciutto.

That's weird because I've never bought prosciutto and because until recently I wouldn't have eaten it.  I've discussed before my very important theory that bacon is not meat, but a seasoning.  That in mind, knowing that bacon doesn't count, I don't eat much pork.  I'll try a piece of it, maybe, if that's what you're eating and you say it's awesome, but it's not my thing.   I half-believe it's because I grew up in a Jewish neighborhood, but I have no issues with shrimp* or cheeseburgers, so that's no excuse.   I used prosciutto at the one cooking class Sous Chef Brian and I attended six months ago, and had it with figs on a pizza about three months ago, and that's the comprehensive history of me and prosciutto.   So I don't know what drove me out to get it, but it felt important.

So that's how this dish happened.
First, I prepped the spaghetti squash.  Preheat to 400.  Last time I wrote about spaghetti squash, I was using some that I had frozen and defrosted, but this time I had to tackle the squash head on. 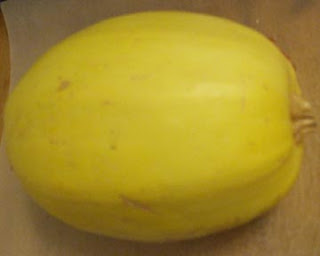 I'm a big believer in having a spotter on hand whenever you hack into a giant vegetable, but specifically, a squash.  I have terrible knife skills, and beyond that I once cut myself on an acorn squash - not on the knife, but on the squash.  So, with precautions taken and neighbors bribed, find yourself with a squash cut in half.

Scoop out the seedy middle with a spoon. 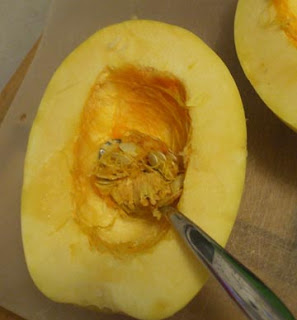 And lay the squash cut side down in a baking dish with some water (I just cover the bottom of the dish) and prick the skin with a fork a few times and roast it for 40 minutes to an hour, ignoring entirely,  until tender. 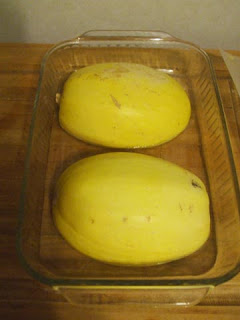 Alternately, you could give it 10 or 12 minutes in the microwave.
While that cooked, I got started on the sauce.  I should say that for timing's sake, I actually gave the squash a good head start on the sauce - I started the sauce when the squash was just about done.

I sauteed some diced shallots in a bit of butter, and added bits of prosciutto, and let that cook until the meat got slightly crispy at the edges. 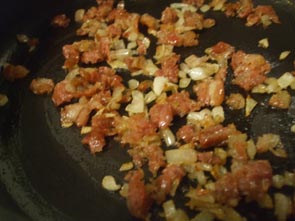 Then I deglazed the pan with a bit of white wine - I had some ancient "2 buck" (really, it's 5 buck) Chuck in the fridge.   Remember the cream I froze in an ice cube tray?

I defrosted some of that and added it to the pan.   Right about now, lets imagine pulling the squash out of the oven and setting it aside to cool. 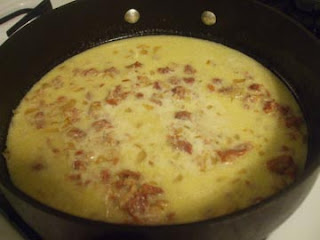 I added in a big handful of  feta and a similar handful of soaked and cut up sundried tomatoes. 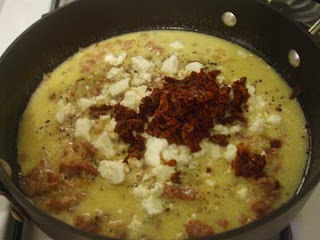 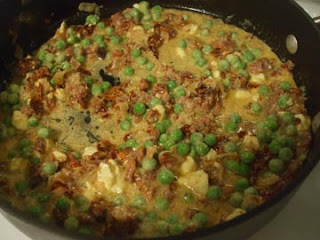 Once the squash was cool enough to touch, Sous Chef Brian tore it up with a fork.  Just run the fork along the squash and spaghetti-like strands form.   Get rid of the skin and save the strands. 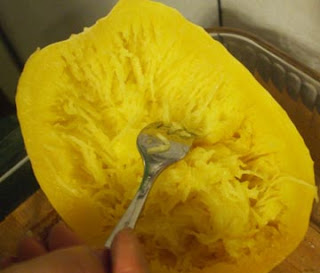 I added the strands of squash to the simmering cream sauce on the stove and gave it a good toss to coat.  I actually only added half the squash, which was about three cups of strands. This wasn't saucy, but everything was lightly coated with the sauce.
This made four not-huge-looking-but-very-filling servings.   This also got rave reviews (sure it did, butter, cream, cheese, meat...), and was voted best use of spaghetti squash, ever.

I tend to overreact nutritionally at the wrong times.  I thought this was going to be a doozy with the cream and the ham and all, and so I looked it up on Nutrition Data.   They don't permit posting of the results (the actual nutrition label - they permit printing, not posting) so you could do it yourself - it shocked me how "light" this was compared to my expectations.   Probably because earlier in the day I had made something else (you'll see it Wednesday) and it was surprisingly heavy.   Anyhow, according to Nutrition Data, this dish, the whole recipe before portioning, has 978 calories, except for the prosciutto which wasn't in their database.  I used 1 1/3 oz of it, which I'm seeing elsewhere is about 100 calories (plus about a week's salt).  So 1100 divided by four means it's ok if you have seconds (sodium, cholesterol, make up your own mind) but we thought our servings were filling enough on their own.  That's the magic of spaghetti squash, there's 42 calories in a cup, so if you're doing a rich sauce, it gives you a nice opportunity.

This would still be good without the prosciutto (I'm so sick of spell-checking that word, I'm cutting and pasting now) - if you wanted it to be all veg, I'd add a bit more sundried tomato for a flavor boost.  Exactly a month ago I made spaghetti squash that was vegetarian and one cheese-swap away from vegan, so refer to that if the prosciutto displeases you. 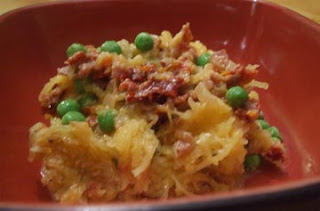 The extra half a squash was packed in lunch containers with red pepper flakes and parmesan.

Have an awesome spaghetti squash recipe? A suggestion for using up the rest of the prosciutto (I bought 1/4 pound and used a third of that)?  Let me know in the comments.

*ok, I have shrimp issues.  I'd prefer if they just didn't have shells, ever.

Spaghetti Squash with Prosciutto, Sundried Tomatoes, Feta and Peas
by Saturday's Mouse March-28-2011
Tangy sundried tomatoes, sweet peas and salty feta complement sweet and delicate spaghetti squash
Ingredients
Instructions
Cut squash in half and lay cut side down in a pan with 1/2 inch of water. Prick the skin with a fork a few timesRoast at 400 until tender, about 45 minutes to an hour. You can also microwave spaghetti squash.Let squash cool enough to handle, then shred into strands with a fork. Use 3-4 cups of shreds for this recipe, reserve the rest for something else. Just add parmesan and call it lunch.Melt butter in a pan on medium with the shallots. Add prosciutto and let cook until crispy around the edges. Add wine and simmer to reduce a bit (half?). Add cream, feta and tomatoes and cook on med low to thicken and form a sauce. Stir in peas and squash to combine and warm through.
Details
Prep time: 10 mins Cook time: 1 hour 30 mins Total time: 1 hour 40 mins Yield: 6 servings, plus leftover squash