I used to be bullion-cube happy.  I used to use a lot of the heavily-flavored, powdered vegetable flavoring that comes wrapped in foil.  This fixes that.  I still use beef bullion occasionally, since I never have on hand the part of a cow that one might use to make stock, but I don't see any use for chicken stock, since I have veg stock, and that fits my agenda since I'm deathly afraid of chicken.  But a flavorful enough veg stock meets 98% of my stock needs.

Also, I don't compost, so things I might compost instead turn into this, compost soup.

So I keep a gallon freezer bag in the freezer, and when I'm cutting up veg all the scraps go in.  ALL the scraps of anything not rotten, including garlic skins and corn cobs and all of it.  Folks will tell you that maybe you don't want to add garlic and onion skins because they'll make your stock darker, but I want a dark, rich stock with as much flavor per tablespoon as I can get.  So this means I scrub the ends of veg and the skins of things.

The way my kitchen works, I fill a gallon bag every 3-4 weeks with scrap, and a gallon bag of scrap makes just over a gallon of stock.  I use about two quarts of stock in the same time, meaning I always have surplus stock.  Seriously, if you want some, just lemme know.

Yesterday, I was blanching up some greens to freeze, because the day before I had a full-on freezer panic, as we were almost out of veggies.  I could totally have sauteed up the stems and eaten them, but I wasn't feeling it... but I had a lot of boiling water going for the blanching.  So I after I did up a bundle of collards and two of chard, I had some greenish flavorful water on hand, as well as the stems of the greens and I realized it had suddenly become stock day.  The stems weren't going to fit in my already very full stock bag, so I went to it.

I dumped a bit of the water and got down to about a gallon, and added in my frozen stock veg and a handful of peppercorns.  I don't add salt, because I figure leaving it saltless gives me more flexibility when I'm actually using it, but some people add salt.

Then I dialed up the heat to bring it to a boil. 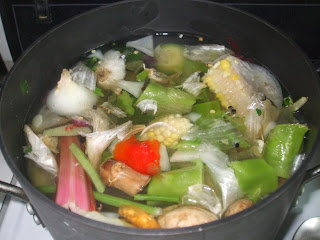 After it boiled, I turned it down to a simmer and waited for it to become stock.  Last time I did this it took about an hour, this time it took about two.  You want to catch it after it tastes like veg but before it tastes bitter.  I think the timing really varies based on what you have in there and in what proportions.

Once the flavor was right, I got to straining - warning, ugly veg scrap photo ahead.

I used a spoon to assault the cooked veg and get all the good flavor into a bowl, then tossed the spent veggies.

Then I jarred it up.  I'm as afraid of canning as I am of chicken, so when I say I jarred it up, I mean I put it in empty sauce jars and threw it in the freezer.   I also made some cubes out of it, because it doesn't make sense to defrost a whole jar just to flavor up one meal.  I actually defrost jars to make more cubes sometimes, because I only have so many ice cube trays available at once.

Send me an email if you're local and want to take some stock, or if you have tips on getting over a fear of chicken, or just want to poke fun at my photography.