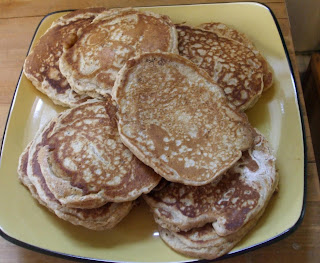 Brian is a pancake fan.  I've mentioned that I'm not much of a baker, and I consider pancakes to be part of baking.  My pancakes were a running joke for a while.  I couldn't even do it with Bisquick.  When we were young we live in a house with a million people and I remember weekend after weekend trying to prove I could do this and failing.  In front of a crowd.
I swear, once we bought our own house, I learned how to measure and mix.  Not that I like it, of course I prefer to add a dash of this and a bit of that and see what happens, but once there's baking powder involved, I'm not qualified to mess around with the ingredients.  So now, occasionally, I make pancakes.

I know it doesn't take a long time to do, but still when I do it I make up a big batch to freeze, because I'm not going to do this next weekend.  The frozen pancakes are easy to deal with.  40 seconds on high in the microwave or a quick visit in the toaster and breakfast is ready.
Pancakes in the toaster?  A big, round, floppy pancake in the toaster?   No.  A hearty, thick, fluffy but non-floppy, healthy pancake in the toaster.   These aren't the type of pancakes you get in a huge pile at a diner.  These are the type that you can have one, maybe two of, before you feel like you've had a lot of pancake.
90% of the time I make blueberry pancakes, but it's not the summer and the other day I heard that my sister-in-law's mother-in-law (seriously!) makes awesome banana pancakes and I thought, "I like nanners.  I can do that."  So I went for it.
Let's talk about flax.  Ok, I've had that in my head ever since I started cooking this morning.  "Let's talk abOUT flax, let's talk about flax..."  I'm not big into fish, ok, I act like a four year old when served fish.  I tried to do a fish a week last year, but it was a waste of money.  I can eat sushi, and I can eat a few select fish cooked, but really, not my thing.  So I started thinking about Omega 3s a few years back and began adding flax seed to meals.   We used to keep a big jar of it in the fridge.  I'd mix it into everything from lasagna to stir fry.  And I fell out of the habit.  So the other day I picked some up in the bulk aisle.  Flax can substitute for some of the fat in a dish and/or for some of the flour.  The internets are big on warning you about flaxseed.  I don't like to talk about things that happen in the bathroom, so Google it yourself if you're concerned about that.  The deal is that you wouldn't want to eat a whole lot of whole flaxseeds.  The Google advises using flaxmeal or ground flax to avoid such complications.   I had whole seeds.
But, in addition to the warnings I read, I didn't want to just be biting into whole seeds dispersed throughout my pancake, so I tried to toast and grind them.
I put them in a pie pan in the oven at 350 for 5 minutes until they smelled nutty and were somewhat more golden.
Then I tried to whirr them into oblivion via the food chopper.  No luck.  So I put them in a gallon freezer bag and assaulted them with a mallet.  This got me halfway there, and knowing how I didn't really care about the impact of whole flax seeds, I figured that was good enough.   Again, I've used whole flax seeds many times without incident, but of you're concerned you probably want to buy it ground.   I measured out 1/4 cup and froze the rest.

Now onto the pancakes.  Basically with pancakes the deal is put all the wet stuff into one bowl and all the dry stuff into another and then mix.
The dry stuff: I used 1 and 1/2 cups of whole wheat flour and another 1/2 cup of white.  When I make blueberry pancakes I use all whole wheat flour, but I was aware that I was adding this half-ground flax to it and it might need a little less flavor in the flour.  I added 3 tbsp baking powder, 1/2 tsp salt and some spices - I think I did about 3/4 tbsp cinnamon and 1/4 tbsp nutmeg.   I also added 1 tbsp brown sugar.  Not a lot of sugar, eh?  You've got nanners for that.
I defrosted three medium bananas.  The same thing I did when I made the banana bread, so go there for more "process" photos.  You could use non-frozen overripe bananas as well.
I mashed them with a fork.
Then I added in two beaten eggs, 2 1/2 tbsp vegetable oil and milk.  Here's the thing with the milk.  I planned on using two cups, one of skim cow milk and one of vanilla almond milk, because we didn't mean to buy the vanilla flavored almond milk, we meant to get plain, and we can't find any good use for it, and the pancakes would benefit from both the vanilla and almond flavors.  So I started with two cups and mixed the wet with the dry. 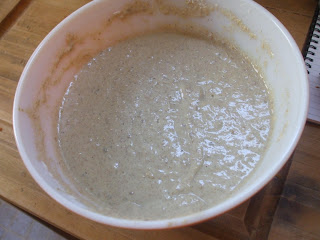 And it was thick.   Now, as above, I didn't plan to make thin, round pancakes with this, but it was too thick.  So I slowly added about another half cup milk while stirring until I got the right texture.
Meanwhile, I got my griddle ready.  I think it needs to be re-seasoned, but I'm not willing to face that right now so I wiped the whole thing down with a little bit of oil and preheated it to medium.  Then I used butter (1 tbsp for three pancakes, refreshing after two rounds, so 1/3 tbsp in each of the spots on my griddle where I was gonna make pancakes, make two pancakes in that spot, then more butter)
About two tablespoons of batter per pancake, and again, my griddle fits 3 at a time. 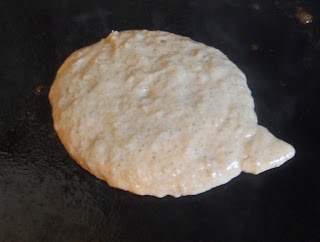 When the edges start to bubble I flip and press with a spatula. 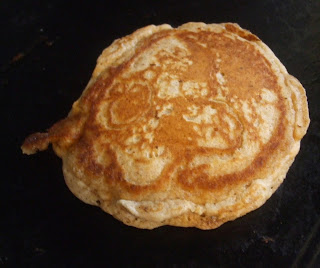 And when they're golden on both sides, we're all set.
This made twelve hearty pancakes.  Hearty like, Brian ate two and I ate one.
They're not too sweet on their own, so they go nicely with maple syrup or honey, but in the morning, you could grab one and defrost it and eat it in the car syrup-free and it's not so far from sweet you wouldn't like it that way.  The middle is moist with banana goodness and they have a slight nutty taste.
To freeze, wait for them to cool and then stack with a sheet of something in the middle - I used freezer paper today, but I've used parchment and wax paper.  Put a stack in a freezer bag and then you're all set to take them out one by one to use. 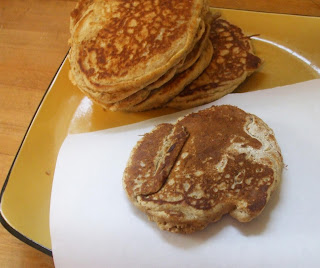 Simplified and Idealized Recipe
Banana Flax Pancakes
3 overripe bananas (defrosted or fresh) mashed
2 eggs, beaten
2 1/2 cups milk (cow or faux, skim is ok)
2 1/2 tbsp vegetable oil
2 cups flour (1 1/2 whole wheat, 1/2 white)
3 tbsp baking powder
1/2 tsp salt
1/4 cup flax meal or ground flaxseed (or whole...)
3/4 tbsp cinnamon
1/4 tbsp nutmeg
butter
Mix the wet stuff together, mix the dry stuff together, then mix the two together.  Vary the amount of milk based on the amount of banana you have and the texture of your flax.  Get a griddle heated to medium and greased (I believe in butter for pancakes but you want to use cooking spray, no one will judge).
Drop 2 tbsp of batter onto the griddle, and wait for the edges to start bubbling.   You can test a pancake's flip-readiness by nudging it with a spatula.  If it moves all together as one thing, flip it.  Cook the other side just until golden.
To freeze, stack with parchment/wax/freezer paper between pancakes and put in a freezer bag.  To reheat, 40 seconds in the microwave or a quick toasting.
Posted by Rose