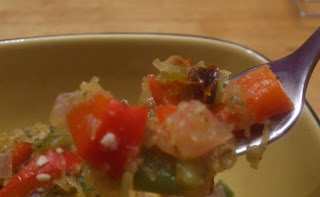 Whoa, it's been a few days.  It's not like I haven't been cooking, I just haven't posted anything. Let's ease ourselves back with a "How f-ing lazy is she - this isn't a recipe" meal.

I'm a fan of spaghetti squash.  I tried to make it vegan once, and used a lot of nutritional yeast in lieu of the parm - it tasted good, but um, some people get violently ill when exposed to all that nutritional yeast, so I'd say use it in moderation if you're going to do that.

My go-to recipe is sundried tomatoes, peas, butter and parmesan.  Brian is resistant to peas in general, and I had leftover veg from the chicken fajitas.  So peppers, onions, and chopped garlic went into a pan with a dab of safflower oil. 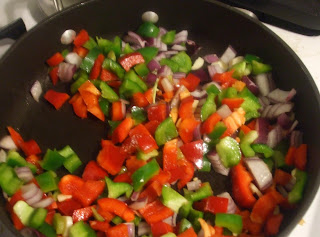 And then I added a bit of stock, three arrow-shaped ice cubes worth, so go, measure that.  Maybe like 6 tablespoons (which is probably something, in cups).  It depends on how much veg you have anyhow. 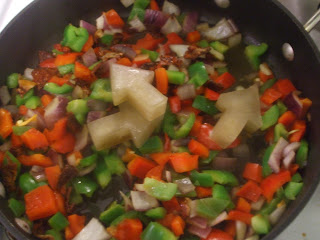 And I let that go for a bit, with a few frozen basil cubes until the veg got limp and let some juices out into the stock to make something sauce-like.  Then I added sundried tomato slices that had been soaking in hot water.  If I had added them earlier, the sundried tomatoes would have overpowered the rest of it, and I don't think the fresh veg would have stood a chance, but when I do this without much other veg (or just with peas), I put the tomatoes in earlier because I want the rich and tangy flavor of the tomatoes to take charge. 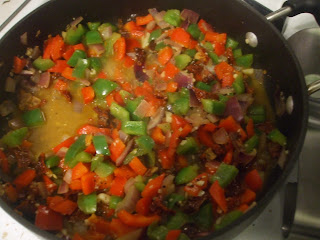 And then the spaghetti squash.  Take squash, slice in half (dude, with a spotter!) and throw in a big dish with some water on the bottom, face down in a hot oven (400) for half an hour.  Let cool a bit. De-seed.  Then use a fork to scrape at the meat and it comes off in nice strands.  You can also poke a few holes in it and microwave it for 7 minutes on high (depending on the size of the squash, maybe a few more minutes).  That's it - you could just add sauce or butter at that point and be done with it.  I don't have pictures of this process because I did that a few weeks ago and froze half.   People say you can freeze spaghetti squash, and you can, but it loses a bit of it's structural integrity at that point - it still tastes great, sort of sweet and nutty, but it's not quite as spaghetti-like.

So add squash to the pan with the veg and sauce. 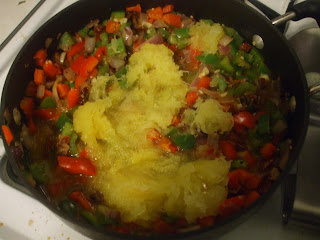 And let it go a few minutes on medium with gentle stirring (respecting the texture of the squash) and let it soak up some of the other flavors.

Then, of course, parmesan. 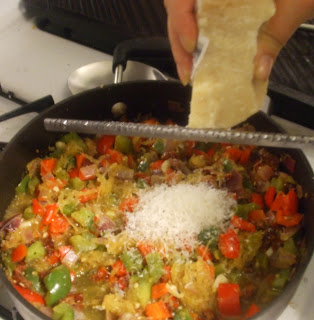 That's it.  This one isn't so much me pretending the squash is wheat pasta as me including spaghetti squash in a mix up of other veg with flavors that work together. 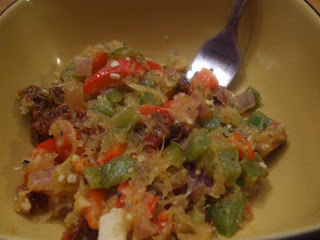 I'll post something more innovative tomorrow, but for now, it's just dinner.
Posted by Rose