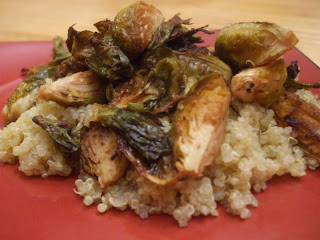 I used to hate Brussels sprouts.  I think a lot of people say that, but I mean like, a year ago.  I mentioned to a friend that I was making them tonight, and she fought me on it.  She told me I didn't like Brussels sprouts, and I said, "Yeah, well, I guess recently..." and she reminded me of the recipe she gave me that one time, and how I made it and was um... unhappy with the results.  Like I couldn't eat them.  I remember.  Then, this one time, I went to the South Philadelphia Tap Room and I was like, yeah, let's give it another shot.  And I loved them.  And I wrote to my friend across the country about it (different friend) and she was like, "I can't believe you just wrote to me about some bar's Brussels sprouts."

So we've learned two things: 1.  I make boring conversation, and 2. I like Brussels sprouts.

At the Tap Room, they're roasted in mustard and served with bacon.  I do the bacon sometimes, but the mustard, and the roasting, that's what's key.
So cut up a pack of sprouts into halves and quarters, whatever fits, trimming off the edges. 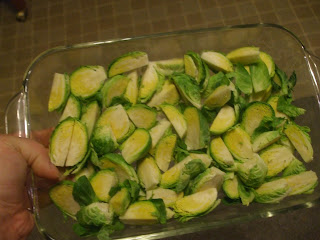 Make a sauce.  I make a mustard vinaigrette as though I was going to use it on salad - 2 tbsp oil, 1 tbsp vinegar (I used red wine, but would have been happy with apple cider), and 1 tbsp brown mustard.  Fork it til it's one thing. 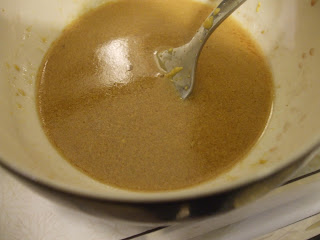 Coat your sprouts.  Toss them around somewhat aggressively, because it may not look like a lot of sauce and you need it to be everywhere. 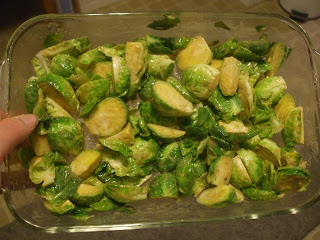 Give it a good salt 'n peppering - and toss again. 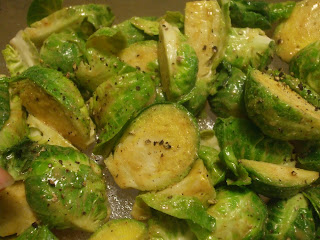 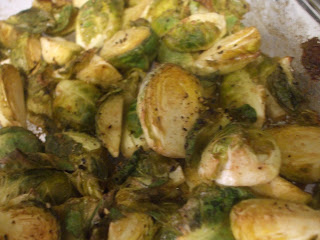 Meanwhile, make up some quinoa.  I used white, or golden, or whatever they call the one that isn't red.  I used up the last of my vegetable stock cubes (I still have some stock jars) and supplemented with water. 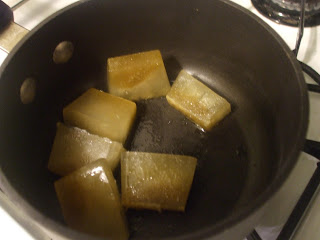 If you buy it in a package, it'll tell you 2 cups water to 1 cup quinoa - don't listen.  Add more liquid.  I used two cups of water for 3/4 cup of quinoa.  It all got absorbed, but if it hadn't, I'd have just strained it in the end.  The extra liquid helps it stay moist and creamy. 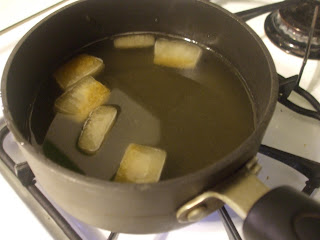 Add the quinoa to the pan, and bring to a boil, then back to a simmer and cover, 15 minutes undisturbed. 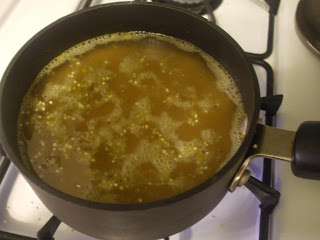 When it's done, it's all fluffy, and each one will have a little curly bit on it, and that's when it's ready. 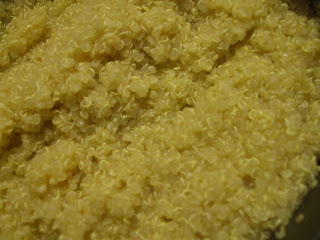 Now back to the sprouts.  You want them very done.  Moist and soft inside, crispy outside. 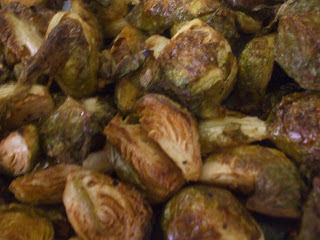 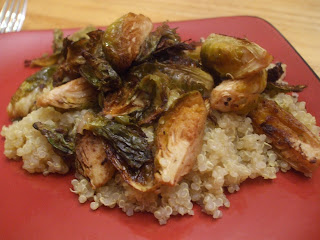 This looks like maybe not a lot of food, but quinoa has magical expansion powers, so stop yourself before going to for seconds, wait a minute, because you don't want your tummy to explode with quinoa, and you know, that might happen.  Also, this might look like veg on grains, but a cup of quinoa has 8 grams of protein, so you're getting some of that.
3/4 cup (uncooked) of quinoa and a sack of Brussels sprouts, in whatever packaging they're sold in at Whole Foods, make us two dinners and two lunches.
Simplified Recipe
Sprouts
1 pack Brussels sprouts (ok, I have no idea how much this is - enough to fill a medium roasting pan?) Cut in halve or quarters, ends trimmed
1 tbsp red wine vinegar (or apple cider)
2 tbsp olive oil (or bacon fat, or whatever)
1 tbsp prepared brown mustard
Salt and pepper
Preheat to 400. Make a vinaigrette - stream oil into vinegar/mustard mixture and whisk. Coat sprouts.  Toss liberally with salt and pepper.  Roast for 45 minutes, tossing once in the middle, and dial it up a bit higher (425) in the middle too.
Quinoa
3/4 cup quinoa
2 cups stock/water/stock and water
Bring to a boil, then down to a simmer for 15 minutes or until curly bits show. Sprinkle with salt and pepper, to taste.
Posted by Rose