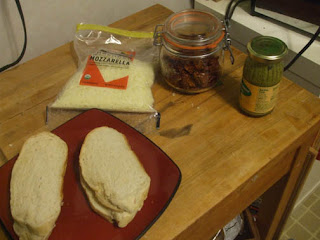 Yeah sometimes dinner is a sandwich, but if it's an awesome one, I'll still post it.  Besides, this totally qualifies as home cooking because that's the bread I made on Sunday for the Spaghetti and Meatballs.  I suggested grilled cheese (I will always, always, suggest grilled cheese) and Sous Chef Brian was like "what if we add sundried tomatoes, and basil, and use mozzarella," so this is totally his recipe.
First I quick-soaked my sundried tomatoes* to bring them back to life and minimize their raisin-ness.  I've never bought the kind in oil, but I think that might make this greasy, what with the pesto and cheese and all, so use the unoily ones and then you have the flexibility to add oil later.   To quick-soak them, I put them in a dish and covered them with water, then microwaved that dish until it was almost boiling.   Sans microwave, you could just add nearly boiling water and soak them for a few.   Sans super-hot water, soak them in warm water for longer. 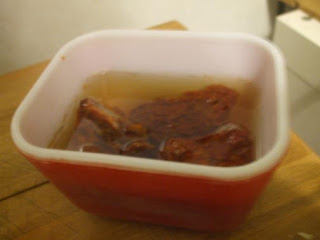 Then I cut them into strips, very haphazardly.  Ok, so what I did was stick my kitchen shears into this dish of hot water and tomato and get to snipping.  You could use a knife, whatever.  Drain.
Find some bread.  This is the "Italian" bread I made over the weekend, but I bet other bread would work.   Probably not cinnamon raisin bread. 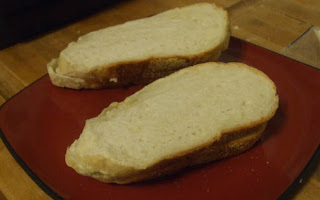 Top with goodness.  I spread one side with basil pesto (from a jar, but by all means, use your own - pine nuts, basil, parm, oil and garlic, whirr and you're done).  The other side got mozzarella and sundried tomatoes.
Make a samich.  Spritz with olive oil (or alternately, grease your panini press) Then press.  I have an actual panini grill (you can cook other stuff on it, Forman style), but you could use one of those old-timey sandwich toasters that were so common in the 90s for homemade Hot Pockets, or you could do it on a griddle with a heavy pan on top of the samich. 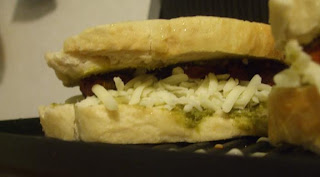 When the bread is toasty and the cheese is melty you've got dinner. 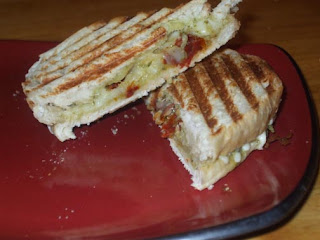 It's a damn sandwich, I'm not writing up a recipe.

*no, really, you have to soak them.  They're like ultra-tangy tough raisins if you don't rehydrate them.
Posted by Rose