Meat.
I wanted to say that first, so that the people who will not read this because it's meat have a head start and can go back to looking at cuteoverload.com or whatever.  I'll throw in a cat picture too.   This is Sabrina, aka, Bear, looking at me, telling me she knows there is meat.
I can trace how this started, all the way to the beginning.  Recently on Sundays, we've had a dinner guest and this week we did not, so at 5pm I started the (never fun) conversation: "What do you wanna eat?"  "I dunno, you?"  And then I ended the conversation: "Meat."  Just a day earlier I had written that I occasionally use beef bullion.   I think I got the idea of beef stuck in my head.   So around 5:30 I made a case for pot roast.  I don't keep a beef roast on hand.  Looking back over the blog, I've made red meat three times in the last six weeks, if you don't count bacon, which of course I don't.  Bacon is a seasoning, not a meat.  So turning to my husband in the early evening and saying, "I want you to go out and buy meat, and then I'll spend several hours cooking it," is not standard.   At first he didn't seem super-interested.  Two weeks ago when doing some haphazard verbal meal planning, he said he wasn't really feeling meat, and I agreed, but I've also made the case a few times in the past for conciously eating less meat, which he's been less than interested in.  So I was shocked when he said he might just eat the frozen leftover vegan sloppy joes.  But I made my case, "want meat" and he went and bought it while I scrambled to get some veggies prepared.  Onions, shallots, garlic, thyme (frozen from last year's CSA), and carrots.
I've made maybe three pot roasts in the 12 or so years I've been cooking independently.  I'm more apt to make a stew.  But its the same foods, right?  So I went to it.
I took the (oh hell) $12 piece of meat Brian bought and browned it in olive oil.  I'm fairly certain what you see in the photo is more oil than you need. 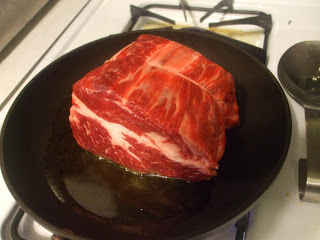 Do you know the deep dark secret of meat sticking to pans?  It's pretty awesome, really.  The secret is LEAVE IT ALONE.  Do not mess with the meat once it's down.  It'll come off the pan when it's good and ready.  So I put it down, and then poked at it with tongs every now and then to see if it was ready to flip.   At first it was one with the pan, they were merged, but then, when it was ready, it just gave and I could flip it. 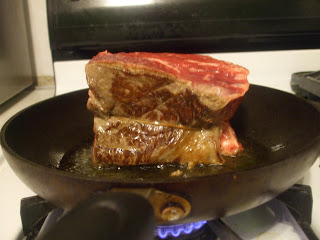 So I did this to all six sides - don't neglect the smaller ends. I think the first side took a full five minutes and then we went to three and then two as the pan and the meat got hotter.
Then I mashed up six cloves of garlic in a tablespoon of butter, melted it and bathed the meat in it and sprinkled with salt and pepper.
You'll see that I switched pans here.  I don't have a dutch oven, or anything bigger than a frying pan that goes into the oven AND on the stove.  So I went frying pan on the stove, vintage pyrex in the oven.  Only my pyrex doesn't have a lid, so I used foil. 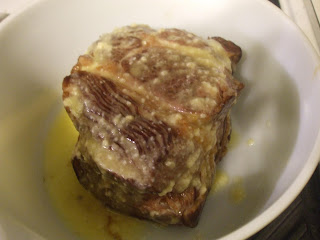 The I filled the dish with onions, shallots and carrots, and sprinkled a good bit of thyme over all of it. 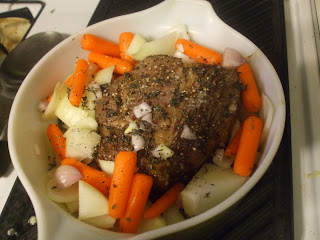 The I added liquid.  I added two cups of faux beef stock - I mean, two cups of veg stock with beef bullion (I actually used "better than bullion") mixed in and a good splash of boxed red wine.  Because it was handy. 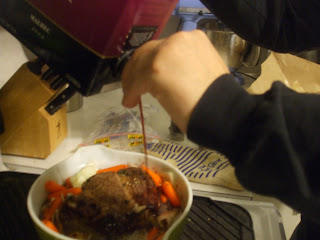 And then I made my foil lid, and put this in the oven at 325 for 45 minutes, and walked away.  Foreshadowing alert - I had been under the impression this thing would cook for 2 hours, but that it would do better with 3.

After 45 minutes, I flipped the meat and added mushrooms.


Why flip?  Because I'm used to cooking it "fat side down" and there wasn't a fat side.  Instead there was a thick layer of fat running through the middle, so I want to get both edges of that to render out as much as possible.
So I went about my business and ignored it for another half hour and then, just for kicks, went to check on it.  Damn thing read 170 on my thermometer.  One hour and fifteen minutes in, this meat was well done.  Quick, rush to make the potatoes.  Turn that liquid into gravy!
I took the meat out and let it rest on a rack, covered by the foil lid. 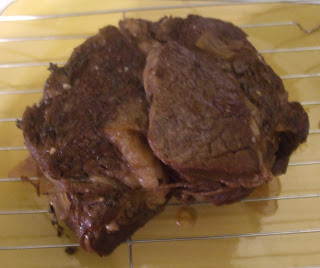 I turned to sous chef Brian and said "Can you make the potatoes?" And there was only a flash of the deer-in-headlights look before it happened. 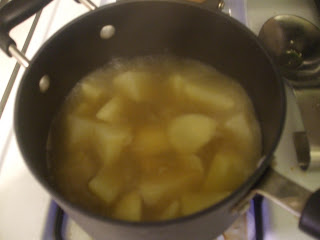 I turned to the gravy.

I brought it to a steady boil and let it cook down for about 15 minutes.  Here's something I've never understood about gravy...  there is X amount of flavor in the pan drippings, cooking liquid, whatever, and I've witnessed many an experienced home cook assess the drippings, assess the crowd to be served, and do some gravy math to make the amount available stretch to meet the crowd to be fed.  But there is X amount of flavor in there, so I guess with more people you serve less flavorful gravy?  I don't get it.  So I boiled it down to about half this and it was still just liquid, not gravy, so I cornstarched it.
And whoa did it thicken.  I ended up with about a cup of dense, heavy, super flavorful gravy - like almost too flavorful.  Dilute-that-with-some-potatoes kind of gravy.
There are no photos of Brian making the taters, but it went like this - three Idahos peeled and chunked, just covered with veggie stock, brought to a boil until poking them with a fork destroyed their structural integrity, then into the stand mixer (seriously, I was like "Brian, can you make the potatoes?" and then there was a pause, and he was like "with the beaters?" and I nodded, and his eyes got big and he said "can potatoes go in the stand mixer?" and I was like, "shrug" and turned my attention back to the gravy).  Ok, so into the stand mixer with the whisk attachment and then whisked until they turned into potatoes, slowly adding in some of the cooking liquid, which was now starchy veg stock until the texture got right, then salt and pepper.   I'd love to tag this "vegan" as I've just listed off my fat free, vegan taters recipe, but then some folks would have to look at the meat, and I'm not gonna do that to them.
The taters were awesome, but without milk and butter, they need extra pepper, and if you're feeling it, you can mash in some onion and garlic.
There's the taters with the gravy. 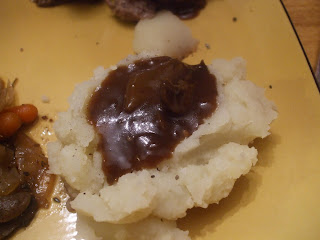 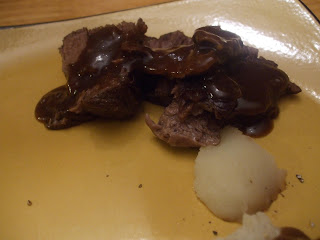 There's the veg, and really, they were standouts... I'm sorry we didn't discuss them further, but they didn't require any attention. 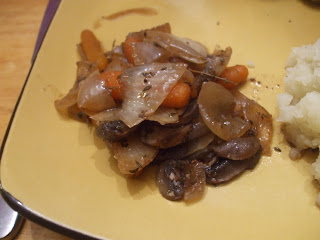 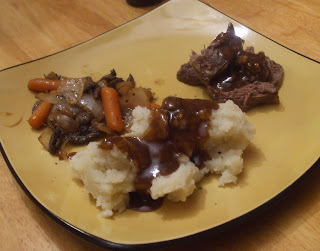 And there's Sabrina, indicating that she found the leftover meat sitting on the island. 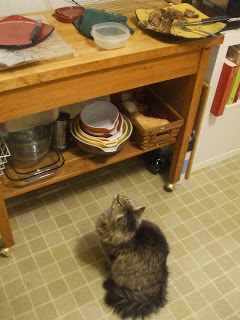 Above, I balked at a $12 cut of meat, and that's because I tend to spend about $4-$6 on a meal that makes us two dinners and two lunches.  In the end, I think everyone would have been happier if we spent more on the meat - there was a good bit of fat running through it that was difficult to eat around.  This was a Whole Foods Grass Fed Chuck Roast. Maybe if I'd cooked it for four hours, that'd have dissipated, but I think I'd have had to do it at 150 degrees to get that kind of time out of it, and I just didn't have that kind of time.
Again, not posting a real recipe - I think there are things here that worked (potatoes, choice of veg, bathing the meat in garlic, using thyme rather than the old standard bay leaf) and things that didn't (cut, timing, temperature) so just go ahead and make it your way or Google somebody else's.  Either way, I'm totally looking forward to the leftovers.


Send me an email if you have recipe or a tip to share, or would like to criticize me in some way.
Posted by Rose