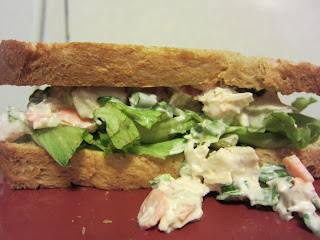 I love chicken salad, and Sous Chef Brian does not.   Every few years I make a new one and he patiently tries it and tells me it's "a texture thing."  He eats tuna salad, and potato salad and coleslaw and everything else you can douse in mayo and call food, but for some reason chicken salad doesn't resonate with him.
So I make it rarely.  Sometimes, I'll order it out, but I need to be feeling pretty adventurous.  Why's that?  Because I went to graduate school for Public Health.  Public Health people know better than to eat the mayonnaise.  In every epidemiology class, there is an outbreak investigation... 19 people showed up at the ER after a banquet.   At the banquet there was steak, fish, and egg salad.  Here's a table of what everyone ate.  And it's always the mayonnaise people who end up in the hospital.
There are two big problems that stand out to me from that assignment.
1) The people in the example who get sick report a sore throat (not a symptom of salmonella, last I checked)
2) Who the hell is catering this banquet and using homemade mayonnaise in the egg salad?
A jar of Hellmans is not going to give you salmonella, because the eggs are pasteurized.  I mean, it might give you salmonella, in the same way that spinach or alfalfa sprouts might, but it's not more likely than spinach to make you sick.  The risk is in homemade mayo with raw egg.  You know I'm not someone to bash homemade foods, right?  Know your farmer.  Know your eggs.  Make mayo and be happy.
Me, I'm not going to, but there are several things I learned in school that have given me unreasonable fears, and I'm not going to pass all of them on to you.   At least not all at once.
I think chicken salad has a few key components - something crunchy, something onion, something sweet, and something creamy.   Also chicken.  So those are the basic rules I follow.   Here's what I did last night.

First, cook up some chicken, let it cool and cut it up.  It doesn't matter how it's cooked, and I've actually boiled chicken for this and it's fine.  Grill it and you'll get a little extra flavor.  Just get it cooked through. Crunchy:  I diced up some garlic scapes pretty small. 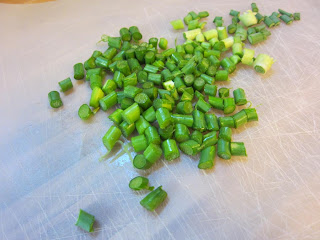 When it's not scape season, this is celery and I use additional seasoning.
Onion: Diced up some scallion, greens plus bulbs. 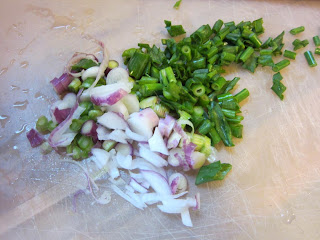 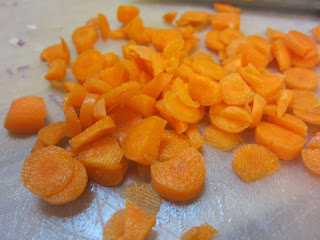 So there's the veg: 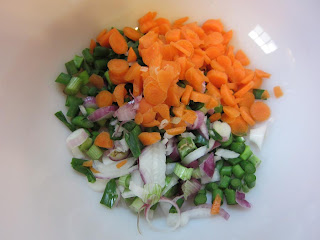 Add mayo and lemon juice.   I used vegenaise* because that's what I keep in the house - not because of irrational fears of mayo, but because it's cholesterol free and one less ingredient I need to worry about when I cook for the vegans.   I used just about a quarter of a cup of vegenaise, and about a teaspoon of lemon juice.  Here's the thing - I didn't take pictures of it because it was the end of the jar, so I just put the juice in the jar with the dregs of the vegenaise and shook it.  Also, the amount of mayo/vegenaise you want is going to vary based on your taste.  I want everything well coated with zero extra, and this was perfect for me, but some folks like it lighter or creamier.  Do it how you like it. 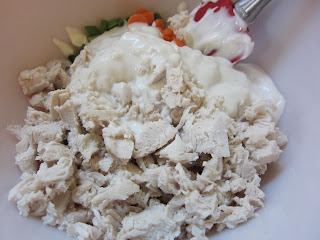 Mix that all together.
Give it a good salt and peppering (I use a LOT of pepper - in fact I peppered my samich after the fact), and some paprika.   If I hadn't used garlic scapes, and added some bite that way, I'd certainly have added a good dash of cayenne.  Sous Chef Brian topped his with hot sauce. 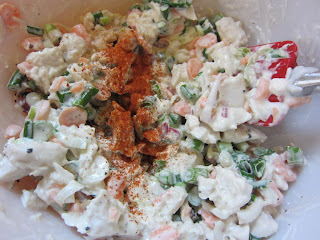 I believe that chicken salad belongs on lightly toasted wheat with lettuce, but do what you want with it.  Remember how I said my last batch of bread rose too much and came out t-shirt shaped?  This is that bread. 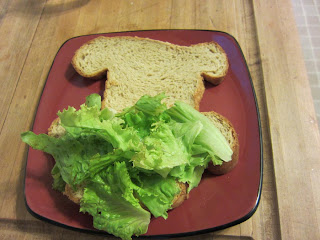 Make samiches and be happy. 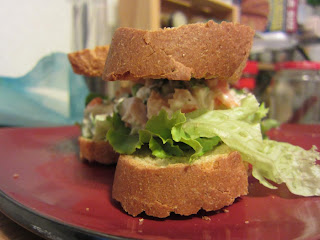 This was enough for three hearty samiches.   I get to have it for lunch!

Scallion and Scape Chicken Salad
by Saturday's Mouse June-11-2011
Flavorful chicken salad using what's good in early summer.
Ingredients
Instructions
Cook, cool and cut up the chicken. Cut up veg. Mix it all together. Give it at least an hour, up to a few days, in the fridge.
Details
Prep time: 20 mins Cook time: Total time: 1 hour 20 mins Yield: 3 servings