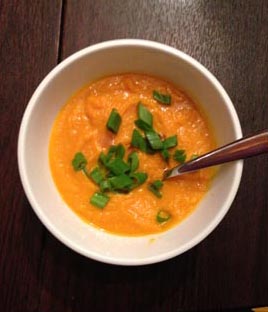 I have a list of secrets to tell you about carrot soup.  I don't like carrots much. I'm not wholeheartedly opposed, like I am to say, beets or okra, but I'm not a fan.  I keep carrots around, I eat them raw with hummus, I add them to things, but when I'm served up a pile of cooked carrots, I'm not thrilled about it. They're so sweet and orange.  But, as a colleague of mine would say, I don't want to yuck your yum.  Maybe you love carrots.  It's really none of my business.

So I bought far too many carrots for a stew that never happened, and they were just sitting there, staring at me.  I considered making seven or eight carrot cakes to freeze.  And I had this sinking feeling that I knew what I had to do.  Carrot soup has been all around lately.  Not so much around me, but you know, you see a friend post on Facebook that she's eating carrot soup and a colleague is microwaving something in the break room that looks like it's guaranteed to stain their tupperware and it's just everywhere.  So much so that when I asked my Facebook friends what to make with all these carrots, I was like, "Yeah, I know, soup.  What else?" And they were all creative and sweet and thought about pickling carrots and carrot salads and deep in my heart I knew the whole time I was going to have to make soup.

Secret #2: I don't know miso.  I know we're all supposed to eat it like three meals a day (wow, that's a lot of soy and another conversation) but I don't know it.  I love miso soup, and I've bought the dried miso soup packets, but I don't know what miso tastes like or what it is. Well, now I know, but pre-soup, I had nothing on this.

So whaddaya do when you're hell bent on cooking something totally unfamiliar and outside of your food comfort zone?  Use a recipe.  I have nothing creative to share today - just a link to someone else's fantastic carrot miso soup.  Smitten Kitchen's recipe was perfect.

This soup wasn't sweet, and wasn't too earthy (dirty?), and the miso gave it this richness that I'd never have expected (because I don't understand miso) and it was wonderful and I'm thrilled to have it in my freezer.

Carrots, an onion, garlic (more than called for, because I like it), ginger and homemade veggie stock.  I needed to use a bit more stock than the recipe called for, but in a pinch you can always add a bit of water if you have no extra stock.  Especially if you have a particularly rich homemade stock.

Slice the carrots thin.  This is the time to use the mandoline or the food processor.  This is a lot of carrot.

Oil, minced onion and garlic (orangey because I didn't wash my food processor in between).  Saute until the onions are translucent.

Add stock and ginger.  Cover and simmer.  My hot tip from this process is that ginger, minced, is tiny and sticky and you're never going to get it all out of the processor (if that's how you're doing it) so pour the stock into the processor to "rinse" the garlic out.  Or just use a microplane or other grater and don't worry about it.  Sometimes technology complicates things.   Simmer half an hour or so. 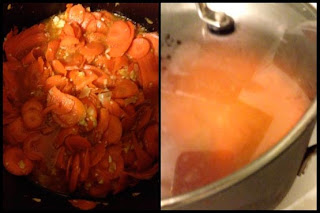 Once your carrots are floppy and tender, mix the soup.  Blend, process, immersion-blend.  If you're immersion-blending remember to be careful of firey beads of carrot soup flying at you at high speeds. Then take your miso (I used more than in the recipe) and take some of your soup and whisk them together in a bowl to get the miso incorporated.  Then add the miso+soup back into the pot and stir.

That's it.  Soup.  Unless you want to get fancy.  Sometimes I like to get fancy.  The original recipe suggests finishing the soup with toasted sesame oil.   I'd suggest being conservative with the oil here, but yes, it's delicious. 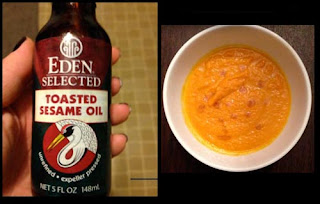 The original recipe takes it a step further with scallions.  I wouldn't have thought it'd be a match, but the scallions add more than just flavor - the texture really makes the soup.  It's more than pureed veg. There's something to bite into. 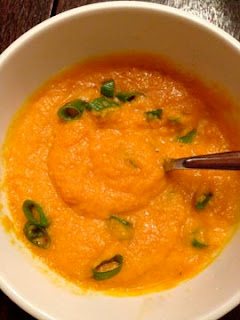 This made about eight servings, give or take a few (is it a dinner or a side dish?) and froze beautifully, which means I get to have it again next week.
Posted by Rose