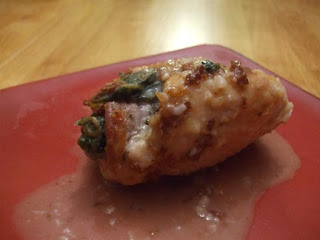 I wish dinner wasn't delicious.
What's my point here?  I guess if it wasn't delicious, I could post this as a fail and move on.  Big picture?  This blog is not about "check out my innovative new recipe you've never heard of" or "look at my impeccable technique."  It's about "look what I made for dinner."  Sure, I want it to say, "you too can make awesome sandwich bread/crackers/sweet and sour seitan," but I guess the part that follows that is "since I did it, and I'm not good at this sometimes."  I just posted a fail (there was the invisible cashew cream sauce with the chicken and black bean egg rolls) and I hate to do it again...  but this is about what I made for dinner.
Some nights I don't want to cook.  I don't know why I can't just take the tortilla soup out of the freezer and go with that, but I make something new instead.   Tonight, I didn't even have to think of something to make - it came from the comments, when I asked what to do with the leftover prosciutto from the spaghetti squash, Cheryl said "saltimbocca."  I've stuffed chicken before.  This is not a technique that I'm unable to handle.  But somehow, everything about it was.

I did veal saltimbocca against my will at a cooking class at Sur La Table.  It's the only cooking class I've ever taken, and I bought it as a gift for Sous Chef Brian, something for us to do together.  That didn't go over well.  In addition, I had to cook veal.  I saw the menu in advance and it included, among other delicious things, "beef saltimbooca."  There are a lot of meats I don't want to eat, but veal is by far at the top of the list, but we survived it and it was about technique anyhow. Irrelevant story, but my only other saltimbocca experience.
It started off ok enough.  I butterflied some chicken breasts,

and pounded them vaguely flat, boiling my hands in bleach every few minutes.  Also, I was screaming, "get down" and "no" the whole time.

So between touching chicken like that and constantly monitoring the cat, maybe I wasn't in the best cooking mood.  I added herbs and such (oregano, red pepper, basil, onion, garlic)

and I layered on prosciutto 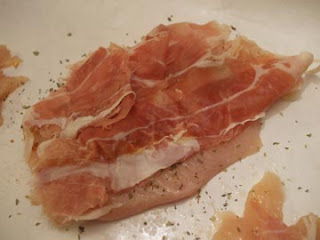 while yelling "no" still 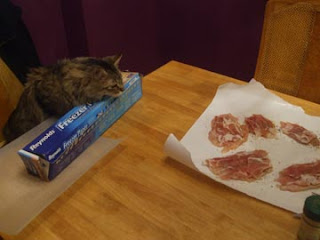 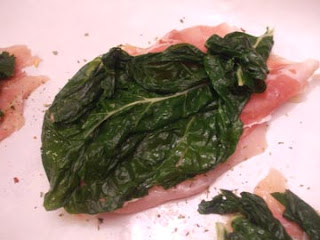 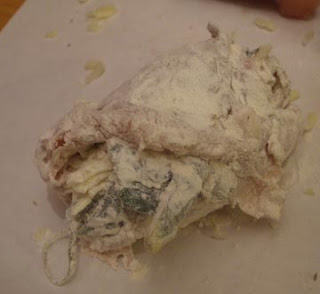 and that's when it got weird.  How does chicken, rolled up like that so not every edge is exposed to the pan, how does that chicken actually get cooked through in a pan?
I put the rolled up chicken into some oil to "brown it."  The next step on the recipe was about butter and mushrooms, and I pulled the mushrooms out of the fridge and realized they were no longer viable food, so I skipped that part. 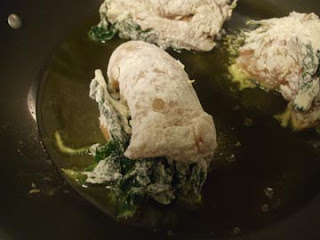 Then I deglazed the pan 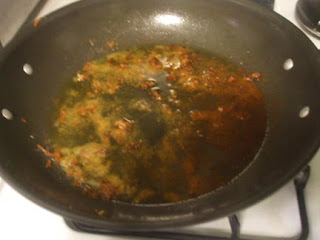 with some wine
and added lemon juice and veg stock (no chicken, of course) and the liquid had no reason to want to be a sauce, so I added some flour and "whisked it in" which means I had flour lumps, but I soldiered on and put the chicken back in the pan while the "sauce" "reduced."

And it got pretty, and I served it.

Once upon a time, we used to have dinner parties fairly regularly.  There were a group of couples and we rotated houses...  anyhow, once I made this chicken, and a guest cut into it and it was pink and I was mortified and ran to put everyone's plates back in the oven, and this one guy fought me on it, and wanted to eat it "rare."  It didn't happen, I wrestled it away from him, but it haunts me.
I went to school for public health.  Every mouse has hantavirus.  Every chicken has salmonella.  It's just easier to assume the worst.
You know where I'm going with this.  Lumpy sauce is nothing next to, "damnit, I thought the chicken was done."  We even photographed it.  It was pretty.  And we each took a few bites, and it was delicious, and then right at the exact moment that Brian said, enthusiastically, "This is almost dangerously moist," I saw pink.  It wasn't bright pink, and it wasn't everywhere, but damn.   It's tough to tell when there's a piece of pink ham right up against your chicken.  That's my excuse.
I've successfully cooked chicken plenty of times.  Yeah, since the blog, most of it has been shredded, and the color of the photos of the other stuffed chicken I made certainly looks pinkish (I promise it wasn't, in real life).   I dunno man.   It was not completely done.  Luckily, I made enough for several meals, and we just threw some of the would-be-leftovers back in the sauce, sighed heavily and let it simmer a bit longer.  With the lid on.  And "a bit" is like "20 minutes," just in case.
It was still pretty, and still tasted fantastic, but it was after 10 when we ate. 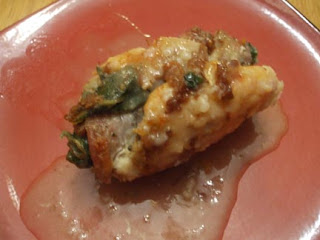 This is the recipe from the comments that I vaguely followed - maybe don't do it the way I did.
Please tell me about your cooking fails.  Sometimes dinner is hard.