So I've been making this bread, from a recipe. It takes days.
I've made bread before.   I make sandwich bread on the weekend, every other weekend, and freeze it, and we cut off slices and defrost throughout the week.  I thought I was all set with this oatmeal sandwich bread that turns out all pretty.
But it's heavy, and oatmealy, and after a while I got tired of it.
Then this issue of Cook's Illustrated came in.  I love Cook's Illustrated, I've had a subscription for years (thanks Kristen!) and I read it the second it comes in, every time.  Cover to cover in one shot.  I usually pour myself a glass of wine and settle in in my jammies on the couch and just read.  But I've never cooked from it.  I'm just not a recipe girl.  I don't know what my excuse is.   And then this issue was like a sign - I need a whole wheat sandwich bread, and Cook's Illustrated is promising one.
So since this is from a current issue of a magazine, I'm not going to type up the recipe.  You have a library card, don't you?
But the recipe is a bitch.  It takes days!  It requires three separate doughs!  It uses words I've never heard before.
So this is the "biga." 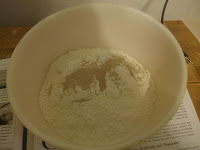 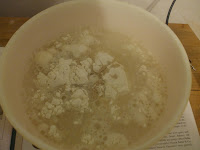 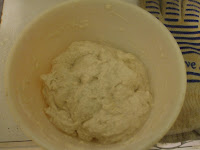 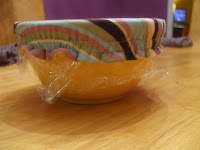 And then it goes into the china cabinet over night.
And this is the "soaker." I don't even have a link, and if it's not on Wikipedia, it doesn't exist, right?  Whatever it is, it called for whole milk, and I had skim plus the extra heavy cream left over from the creamed spinach so I mixed them together and will cross my fingers. 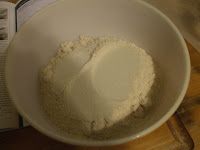 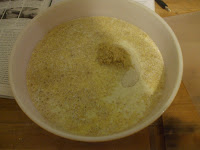 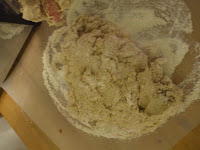 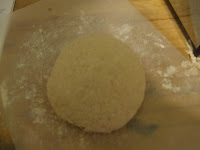 And that had to sit in the fridge overnight.
And then there's the "dough" - which I guess is everything together plus some more stuff. Seriously, rip into the "soaker" and tear it into bits, add other food stuffs and toss in the "biga" - the stickiest thing you've ever touched. It felt like marshmallow but smelled like beer. 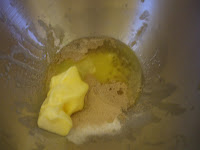 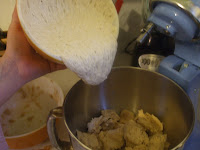 It didn't seem like it was going to come together.  The directions said to start on "low" and then go to "medium" once it was all one thing, but it wasn't getting there on low so I dialed it up to 3.  This meant my mixer walked halfway across the counter, but eventually it came together.
So once it's all mixed together, it gets formed into a ball - I don't have a photo of the ball, but it was saggy as anything - not springy and wouldn't take much shape.  So it's more a smooth, heavy lump.
That gets covered in saran wrap too and sits 45 minutes to rise.
This is where things started to go downhill.   After a 45 minute rise, not much had changed.  And I added yeast two times without proofing it, and I thought maybe I had some bad yeast, but I was so far in at this point.  I gave it an extra 45 minutes to rise, and it didn't double in size but it got a bit bigger.  Then another round of kneading, then another rise.
This is not weekday bread.  Even though I started a day in advance, I get home after 5, so four 45 minute rises, plus an hour of baking and then cooling really didn't fit into my evening.  But what was I going to do at this point?
I kept at it.   After this rise, it looked bigger. 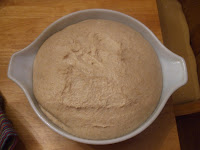 I don't have two loaf pans that are the same size,  so this is my lopsided bread once I divided it into two halves, shaped it, put it in the pans, let it rise in the pans another damn 45 minutes and slit the tops. 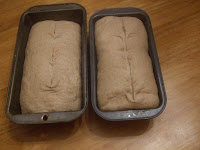 Nearly an hour in the oven, and it's totally past my bedtime.  The slits were inconsistently effective. 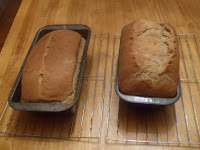 Yay, bread sounds hollow when I thump it, reads 200 degrees on my thermometer, is done.  I just have to let it cool.  I put it in my (turned off) microwave to keep it vermin free and went to bed.
When I woke up, I realized I hadn't removed the loaves from the pans, which is a huge no-no.  It means the bottoms sweat and steam themselves into soggy oblivion.   But I was so far in, at this point.  I put the soggy loaves upside down in the oven at 200 for a while, and the bottoms crisped right up. 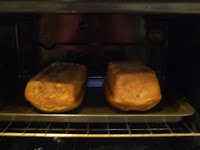 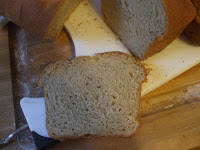 And if you make it hot, and add butter and honey, you have delicious toast. 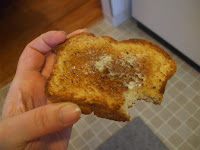 So it was a giant chore, but the best bread I've made.  It's not that it tastes like anything special, it just tastes like wheat bread, but really good.  Better than good wheat bread I'd buy in the store.  It's easy to slice thin, which has been difficult in the past, and it's all packed up in the freezer.  With two loaves, this should keep us in bread until the end of March or so, so I don't have to commit two days to breadmaking for a while.