I like spicy food.  I used feel like I was in a privileged class of people who could eat hotter food than most, but in recent years I've become aware of my limitations.  Maybe five years ago I burned my hand on a habanero and realized I needed to use gloves to cut some peppers. I guess that was the beginning of the end of me bragging about spicy food.
Then when we started eating banh mi, there were a few incidents.  There is one long slice of jalapeno on this sandwich, and maybe a tenth of the times I've eaten it, it's burned my face.  Burned my face, like caused me to mentally go through all those TV shows like Good Eats and Food Detectives (whoa, I can't find a clip of either, what's wrong with the internet?) that described scoville heat units and what to do to cool a burning mouth (milk, beer, sugar).  I finally settled on rubbing alcohol (not for inside the mouth, for outside the mouth) which I hear only works for some people.  So since then, I've typically taken the seeds out of the jalapeno, or torn the pepper into bits to distribute throughout the sandwich.
So yesterday my shopping list included a single jalapeno, for a meal I was planning, but Trader Joes only had them in a box of ten (ten jalapenos for $1.59, compared to one jalapeno for $1.59 at Whole Foods) so I got the box.  Then I sat around thinking about what I could do with nine jalapenos.  I read a few canning articles, and scared myself again.  I thought about poppers but I don't really like them (but Brian does) and I don't have cream cheese, and how else do you get the cheese to stay in during breading?  And then remembered years ago some chain restaurant we went to had deep fried breaded jalapeno disks that we used to love.  So I went for it. Panko, egg, salt, jalapeno slices, and I was going to do it in the oven.
Jalapenos can range in heat from "meh" to "whoa," and I feel like you never know what you're getting into, but cooking them reduces their fire a bit so I figured it wouldn't be *that bad*.
Look, I even took pictures. 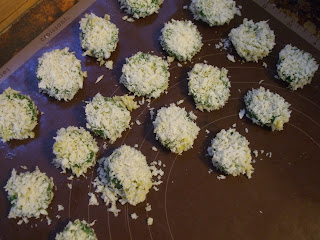 I don't have a picture of them done, because when I pulled them out of the oven (30 mins at 400) they looked delicious and I ate one.  Whoa, that's a bit spicy.  And I had another.  And Brian had one.  And I teared up and grabbed my soda, but that didn't help. And I sprinkled sugar on my tongue, and had a shot of tequila and two glasses of milk and we agreed that this dish is Not Food.
I've actually saved them, because I'm like that, in case I get inspired to make some sort of a casserole or something where they can be just one part of a tastier whole.  Really, I'm just delaying throwing out food.
Got ideas for using up too-spicy crispy jalapeno disks? Email me and help a girl out.