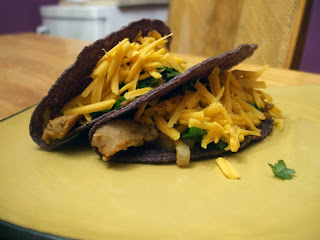 Also, I finally get to use tequila as a food.

Let's start there.  I made a tequila lime vinaigrette with oil (i used olive, but whatever) apple cider vinegar, tequila, cilantro, a little garlic power, sugar and lime juice.  Measuring made easy - one shot of each, except the lime, use a half shot of lime.  A third of a shot of lime if you're not into lime.

Add your vinegar, lime and tequila to a bowl and stir.  Then slowly stream in the oil, whisking frantically. When the oil is incorporated, add the dry goods.  I chopped up about a third of a cup of cilantro 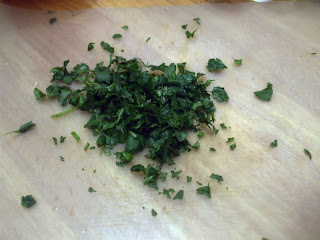 and added literally a pinch of both sugar and garlic powder - the amount that fits between two pinched fingers.  Whisk again. 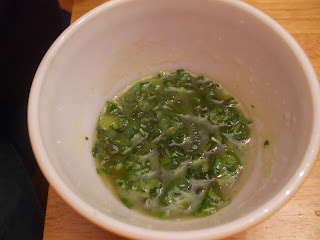 I think the dressing benefits from sitting a bit, so I did that first, put a bowl helmet on it and threw it in the fridge for about a half hour while I did the rest of it. 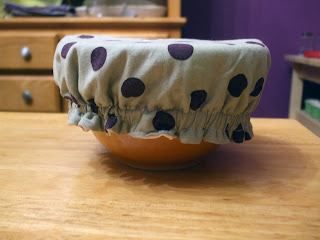 The rest of it, really, is just making a salad, mixing up taco powder, opening a package of seitan (I used Westsoy strips), dicing some onion and heating it all together.  I made my standard taco powder, which suits a pound of meat, and it was a little too much for the amount of seitan in a package (8oz), so I used less.  But this here is my regular taco powder recipe, for a pound of food - adjust quantities as needed, but the proportions are there.

Again, this makes more than you need for this dish, but I'm not going to divide all that up, I used real measurements.  For this dish, use like 2/3 of that mix. Or make less.

I make it up in batches and just use 2 - 2.5 tablespoons of it, whereas for a pound of meat I use just over 3.

I put a third of a cup of water in a saute pan with my spices and stirred it on low heat a bit until it was more like a sauce than like spices in water. 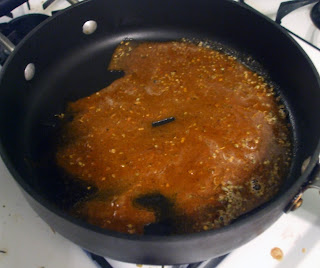 Added the seitan (it's pre cooked, just get it hot) and some onions. I wanted there to be some crunch left in the onions. I left it covered on very low while I made my salad. 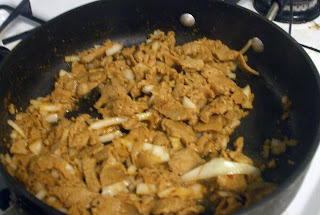 This salad is pretty flexible. In the summer, I use tomato, and I could totally see including summer squash or cucumber, and a little bit of diced jalepeno. You could add beans, but I never think ahead to get them soaking. This time it was romaine lettuce, frozen corn, scallions, and diced avocado. 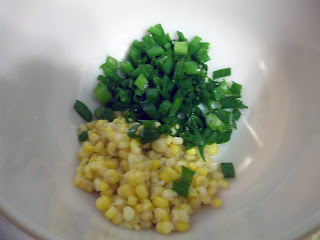 I thought everyone opened avocados the same way, but recently I've discovered there are many techniques. I run a knife around the thing, skimming the pit, and then unscrew it. 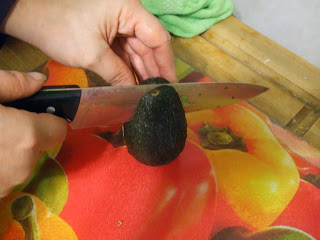 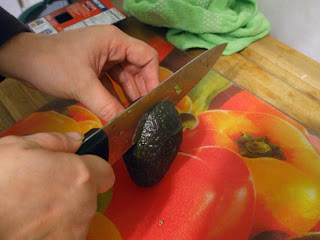 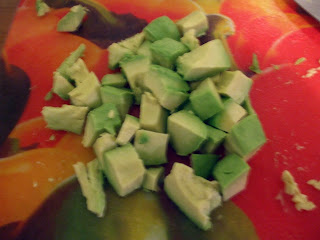 Toss the salad together with the dressing and give it a minute, let it all hang out together. 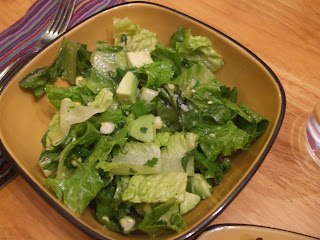 Put seitan on taco shells (soft are cool too, we just had these) and top with cilantro, a squirt of lime, and cheddar (optional - still tagging this vegan). 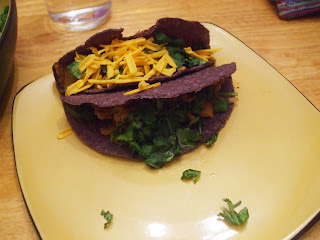 An 8oz package of seitan made enough for six tacos.  We didn't eat six tacos, so it's gonna be lunch.
Posted by Rose