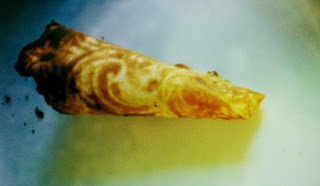 Most of the time, that's what we call them.
"Norwegian cookies."
"The cones?"
"Yes."

There hasn't been a Christmas where there weren't Norwegian cookies in my life.  Actually, most of my December is spent relatively tradition-free.  But always cookies. 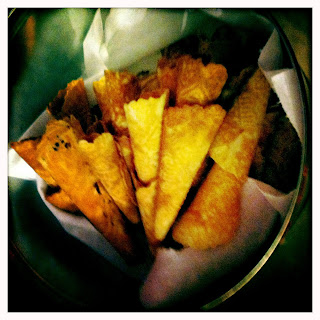 So every year I keep an eye out at flea markets and yard sales for tins because every December I make a few hundred of these cookies and give them to friends and colleagues and family. 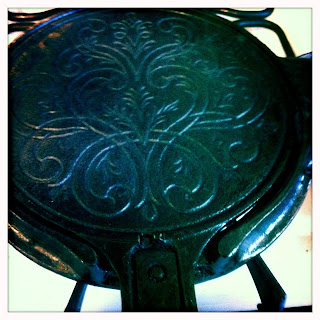 The cookies are intense.  I mean, they're delightful, they're so thin and lacy that they shatter in your mouth (and in your hands, and in the tin) and they explode into butter and sugar crumbs.  It's spectacular.  And making them is intense.  A cast iron press over a gas flame, dollop, press, flip, flip, flip, peel, roll.


Barehanded, we take the soft but cooked cookie and roll it into a cone before it hardens.


My fingertips get burned just to the point of a shiny glaze, never quite to the aloe level.  Keep the paper towels on hand to wipe up the grease and a fire extinguisher nearby just in case.  Bits of cookie dough fall off the iron, or you scrape them off with a knife around the edges, and they eventually make their way into the flame of the gas stove.


I remember not being allowed in my grandparents' kitchen when the cookies were being made, because it was dangerous.  It actually was.  When the iron is open, I try not to think about reading Johnny Tremain* in middle school.

"No, damnit, they're nothing like pizzelles.  They're Norwegian, not Italian.

"Oh, these are like ice cream cones.  What do you fill them with?"


I made them with my mom as a teenager, in a kitchen that smelled like butter and minor kitchen fires, with the windows open a week before Christmas.  The cookies set off the smoke detector every time.  Without fail.  My mom actually makes Level Two Norwegian Cookies - Sandkake (which we called sun-caga).  These things are brutal - press the almond-flavored dough into a tiny iron tart pan, put a dozen of those pans in the oven, remove them and slam them down on the counter while they're still hot to dislodge the cookie.  Repeat.


I can't imagine.  I don't like almond, so I've never made them myself, but I also like having fingers.  I've talked about having asbestos hands before, but I know where I get it now. My mom makes Sandkake.  In fact, I mentioned burning my fingers on these, and she was like, "Really? On the cones?"


My mom gave me the recipe when I was first living on my own, the year that my grandfather gave me my own cast iron Krumkake iron (we always spelled in Krumcaga, but a Googling has corrected me.  I don't speak much Norwegian). 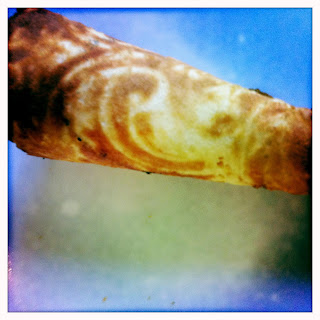 I remember either the first or second year that Sous Chef Brian was exposed to the cookies (our early days are spotty, who can remember when we were actually together?) he and I were living with a million people in the woods and we made a giant tin full of the cookies - my mother did not approve of Sous Chef Brian's involvement in the cookies (as much as she loves him, I'm still not sure she's ok with him having the recipe).  Anyway, we made this giant popcorn tin full, maybe six dozen made individually by hand, and told our roommates they could have some cookies.   I actually wept when I found the tin empty a few hours later.  Sous Chef Brian was enraged.  But generally, houses full of 22-year-old boys aren't the best place for individually made cookies.

A few years later I brought them into my office and a colleague - a woman who baked nearly full time despite her day job, and who exchanged cookies with strangers on the Internet, and who had a room in her house dedicated to suitcases (unrelated, but really?) - opened the tin and said, "Ooh, Krumkake! I make these sometimes." 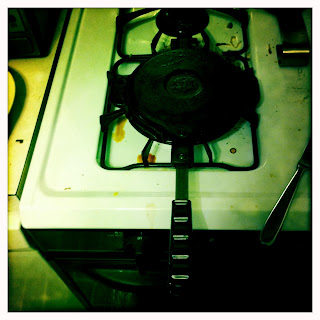 I had never met anyone who was familiar with them before. And I didn't like that they were a "sometimes" thing.  Every December, damnit.


"You have a Krumkake iron?"
"I have lots of baking things."
Well well.


She asked for my recipe, and, well-trained, I refused.  She told me there were tons of recipes on the internet.  That was impossible, these were my family's cookies.  But I looked, and there they were.  The next year I made some different flavors, but they didn't go over well, and that was that.


Since then I've made them for my undergraduate mentor and her Norwegian husband and for my friend's ex-boyfriend's Norwegian dad, and I'm no longer shocked when people know what they are.  I posted a picture on Twitter the other day, and my blog-buddy Kristina responded immediately.


Just the other day, I told my mom I had made gift tags to go with them, for the neighbors and such, and asked if I should make a few tags for her and the cookies she was distributing.  I showed her what I was using and asked if she wanted any edits, and she said, "Take off the ingredients, no one needs to know that!"  I made the food allergy argument - the tag doesn't say what to do with the ingredients or how much of what to use, and she grudgingly accepted the fact that I share this information with people who actually eat them.


I thought she'd like to hear the Twitter story ...I have this Internet friend who's totally familiar with them, look how famous your cookies are.. but a combination of her disbelief that I write this thing at all, "Who wants to read what you ate for dinner?" and her secrecy about the cookies took hold.


"How many people can read what you and this woman in Utah said about the cookies?" 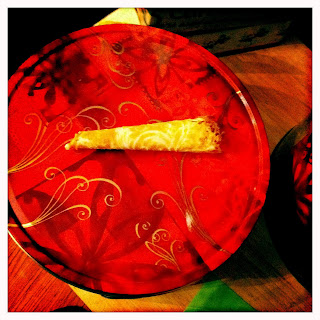 So, it goes without saying, no recipe here.


Besides, you don't have a Krumkake iron.


But that's what I do every year in December.  I make six batches of hand-rolled amazing cookies, and then realize I haven't shopped or wrapped or vacuumed.  There's not a single twinkle light in my home, no tree, no wreath on the door, and my guest room is not nearly ready for January company, but I've gone through [x] pounds of [ingredient] and my fingertips are shiny and my stove is disgusting looking and I'm done making cookies for the season.

*He's a silversmith's apprentice and disfigures his hand with molten metal, and it haunts me.  But I had to search for the book's title today to write that, yesterday I said to Sous Chef Brian, "What's that book with the metalsmith and the hand?" and he looked at me like I was crazy and I was like, "Is that Where the Red Fern Grows or something?"  I don't think I paid a lot of attention to middle school literature.