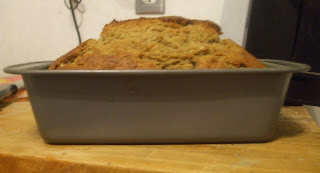 Banana bread.  I'm posting this for Michelle, since she's getting tired of all the meat.
I think there are two basic styles of banana bread: breakfasty and desserty. This is breakfasty. It's sweet, but not supersweet, and it's hearty and a little heavy. It's a meal.
I make banana bread when my freezer says it's time. When I have bananas sitting around and one looks like it's not gonna make it, I throw it in the freezer. Not when it's blackened mush, but when it's very brown or has enough black spots to make me pause. I just throw them in the freezer, skin on, and wait. And then when I have 3-5 nanners in there, I make bread.
Frozen nanners look awful. The skins turn dark brown immediately, but the inside doesn't.
My basic banana bread recipe is derived from the Better Homes and Gardens New Cook Book - one of those books that left my parent's house with me when I moved out on my own. It's not "new," that's just the title. It's from 1989. I like having books like this, because I honestly don't know how much baking soda goes in anything. I'm not a huge baker. So I look to the really basic books for guidance on things like that.
Preheat to 350.
So here are four smallish frozen bananas.  Three big ones, five small ones, whatever, about this much banana.  It's flexible enough that you can make it more banana-y if you want to.
I take my bananas and put them in a bowl of warm water to defrost while I get the rest going. 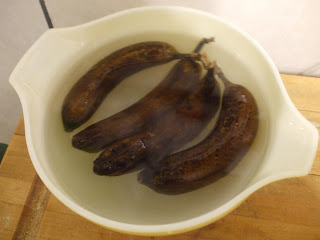 The original recipe calls for all purpose flour, but I don't have that and don't want to eat "white" banana bread, so this is a mix of whole wheat and bread flours.  1 and 3/4 cups total, and I lean towards whole wheat when mixing flours. 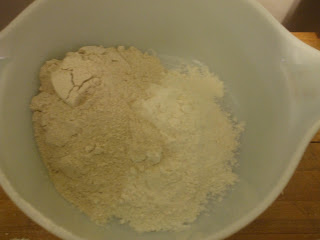 I did it in the mixer for the first time, but by hand works just fine too.  Put one cup of the mixed flour in a bowl, and add 2/3 cup sugar.  I do 1/3 brown and 1/3 white, because I really prefer the flavor of brown sugar.  Add 2 tsp baking powder and 1/2 tsp baking soda, and a good pinch of salt. 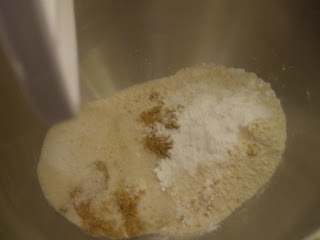 Mix that together and add 4 tbsp butter (my orig recipe calls for more, but I think since I use more banana it's ok).  And 2 tbsp milk.  I use skim and it works. 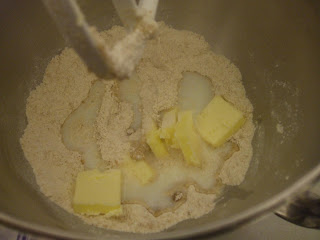 Peel your defrosted nanners into the mix. 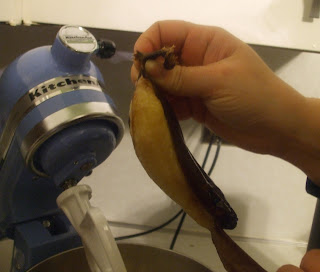 And mix until pretty well blended.  I like chunks of banana here and there. 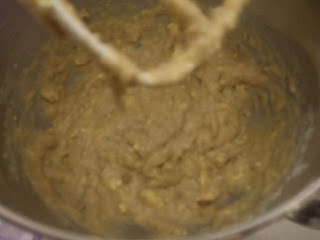 Add two eggs, the rest of the flour and your spices.  This is where I stray hardcore from the recipe.  I use spices.  Seriously, why not?  Why is there no non-nanner flavor in the original?  I use a good bit of cinnamon, and then about equal parts (a little less than the cinnamon) of nutmeg, ginger and cayenne.  Don't worry, it's not "hot," it's just good.  Mix again.
Grease a loaf pan.  I keep my butter wrappers in a zipper bag in the freezer, and when I need to grease something, I take out a wrapper and use it.
Pour in the batter and slam it down on the counter to pop the bubbles and let it settle evenly. 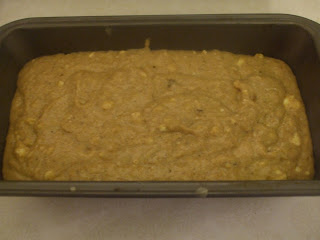 About 50 minutes in the oven, or until a toothpick comes out clean. 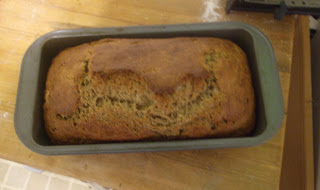 Let it cool for an hour, or you're going to flip it and the bottom will stick to the pan.
Got something to recommend, or want to complain about the meat, email me and we'll discuss.
Simplified Recipe
3-5 defrosted bananas
1/2 tsp baking soda
2 tsp baking powder
1/3 cup brown sugar
1/3 cup sugar
3/4 cup bread flour or AP
1 cup whole wheat flour
1 solid pinch salt
1 tbsp cinnamon
1/2 tbsp each of nutmeg, ginger and cayenne (this is flexible)
2 eggs
2 tbsp skim milk
4 tbsp butter
Put one cup mixed flour in a bowl and add baking soda, salt and baking powder, and both sugars.  Mix and then add bananas, butter (cut in chunks) and milk.  Mix a bit.  Add the rest of the flour and your spices, and two eggs. Mix some more.  Leave a few chunks.  Bake at 350 for about 50 minutes in a loaf pan or as muffins (reduce cooking time for muffins), until a toothpick comes out clean. Let cook before taking out of the pan.
Posted by Rose