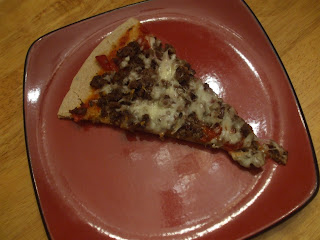 Pizza.  Where it all began.
I mean that in a few ways.
When I was much less experienced at cooking, and we were much more likely to eat something out of a box, I started buying balls of pizza dough at my grocery store.  I think making my own pizza - even though I wasn't making the dough - was the start of our increased appreciation for making our food at home.  With that came choosing interesting ingredients, being more fully in control of what we were consuming, and increased confidence in my ability to cook things myself and enjoy them more than if I had paid someone else to cook them.
I started making pizza dough a couple of years ago, and I remember how scared I was to use yeast for the first time.  I used to be a terrible baker - my inability to cook anything that included flour was a running joke.  I'm not really into most baked goods, so I still don't do a lot of baking, but when I do bake, it typically works out, and I've been able to tackle a few breads and slightly more advanced recipes, so pizza dough was really my intro into making doughs and such.
And finally, the blog.  A few weeks ago, I emailed a few friends my pizza dough recipe, and one of them suggested I start a blog, and I was like, yeah.  So, yeah.
So this is the same recipe I posted in the beginning, now with photos and a different topping.
Dough first, because it takes a while.
Put a quarter cup of barely warm water in a mixing bowl, and dissolve a tablespoon of something sweet into it.  I use honey, but you can use sugar or whatever. 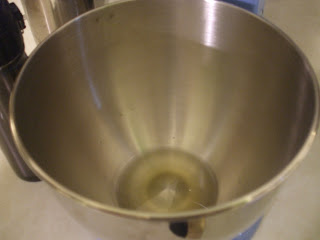 Stir in the contents of a packet of yeast. 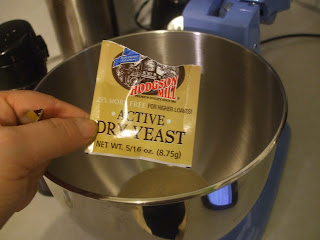 Let it sit for a few, and get foamy.  Rumor is, if it doesn't get foamy, your yeast is bad and you need to start over.  This has never happened to me, but still I check. 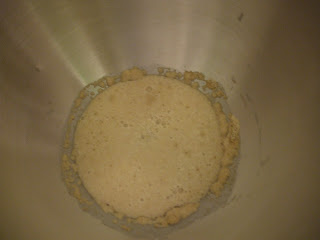 Add two tablespoons olive oil and a cup of water. 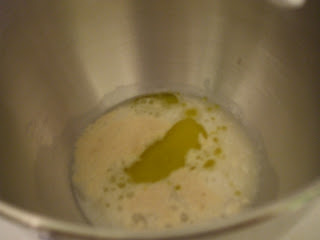 Add three and a half cups flour - I like to go with two cups whole wheat flour and one and a half of bread flour.  Like with anything, you can't go all whole wheat, or it'll be too dense.  I've made this cracker-like before, and that's not pizza.  So about half and half, leaning more towards the whole wheat.  This is also your chance to herb up the crust.  Sprinkle in the sorts of things you'd put on top (basil, oregano, red pepper, etc).  Add a teaspoon of salt. 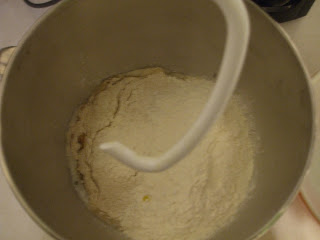 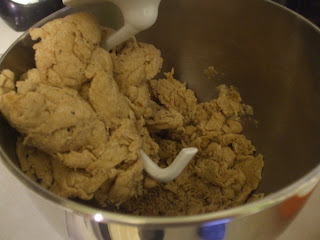 When it's a shaggy mass (seriously, that's a baking term) like all one solid lump,
cover the bowl with a damp towel and let it sit and hydrate for 20 minutes. 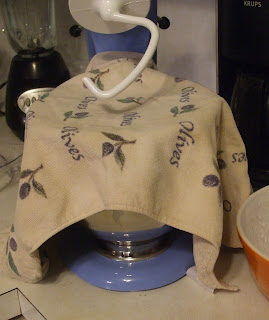 After 20 minutes, knead it aggressively.  I do 7 minutes or so with the mixer set on 2, but again, you can do this by hand.  I did for a long time, but then I got the mixer.  Knead until it's smooth and then shape it into a tight ball. 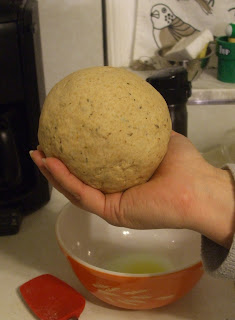 Swirl some olive oil around in a bowl to coat. 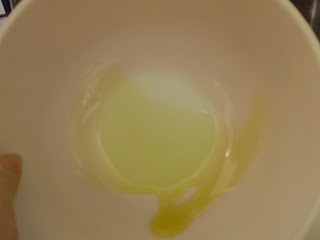 And put the ball in the bowl.  Twirl it around a bit to coat in oil. 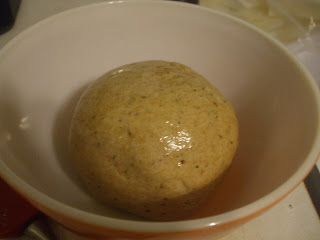 Then cover it with a towel and hide it away to rise for 1-2 hours.  You want to put it in a warm place with no drafts.  Seriously, I keep it in my china cabinet. 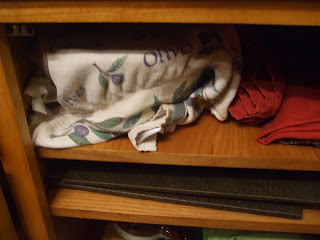 Now you've got some time to think about what goes on the pizza.  You need sauce.  You don't necessarily need sauce, you can brush it with olive oil and garlic, or whatever else, but something needs to go down on the dough - I'm using red sauce.  I didn't have a jar handy, which sucks, because you only need a few tablespoons of sauce, and that's a lot to make sauce over, but I did.  I made sauce.  Not tomato season, so I used a can of tomatoes, plus a few cubes of frozen basil and garlic and a good handful of oregano I had frozen from the CSA this summer, and some red pepper and onion powder and sugar. 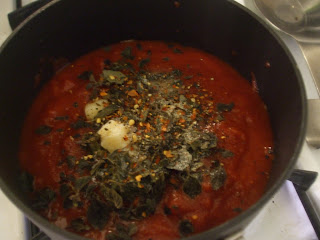 But as before, make your sauce how you like it, or really, open a jar.  Classic pizza sauce is tomato paste and olive oil and spices, so you can just do that too.  I think that's why pizza is so greasy.  I don't put any oil in this sauce (with fresh tomatoes, yes I do, but not for this).  I'll freeze this and then next time I won't be stuck making last minute sauce. 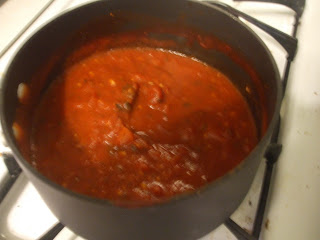 Now, this is going to be Meat"ball" pizza.  If it was "Meatball" pizza, I might be subbing in some non-meat product (especially if it was "Meat"ball pizza!) but this is Meat"ball" pizza, which means I'm not bothering to make meatballs just to slice them up on top of pizza.  If it was Meatball "Pizza", I'd probably be putting meatballs, sauce and cheese on a Triscuit.  But no, I'm cooking up some meat, and it'll taste like my meatballs.
I started with some oil in a pan. 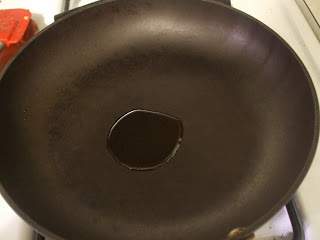 And added a minced shallot. 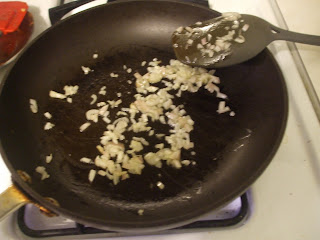 And a half pound of ground bison. You can use turkey or beef or faux ground meat here. 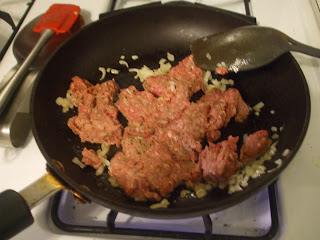 Before it was cooked through, I seasoned it up like it was meatballs. Seriously, just think of what you put in meatballs and add that.  Make it like your meatballs.  Hold the breadcrumbs and egg.  I did oregano, garlic, onion, basil, red pepper, salt, pepper, and a dash of cayenne.  I think that's my recipe for most things anyway. 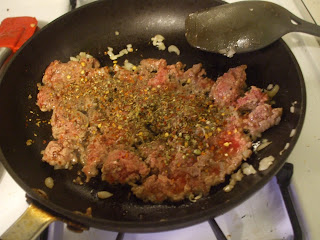 Get it all the way brown and turn it off. 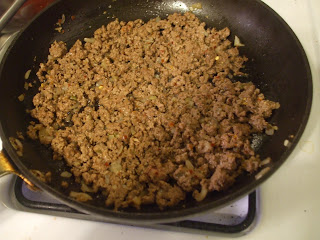 Let it cool before adding to the pizza.
Oh yeah, the pizza.  Hows that dough doing?  So after it's risen to about double in size, pull it out of the china cabinet or whatever, and preheat your oven to 400.
Maybe it'll look like this. 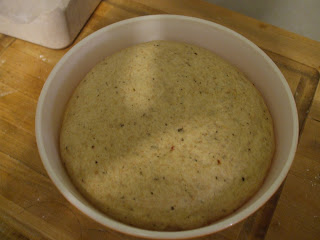 Divide the dough in two.  Take one half and put it away - covered in the fridge for up to three days or in the freezer.  Next time you use it, let it come to room temperature, 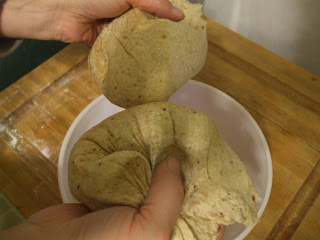 then roll it out.
I start with a rolling pin and then move on to the hand tossing. 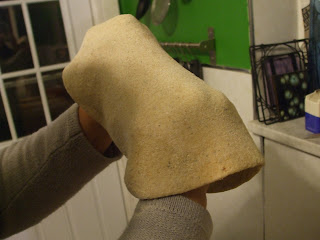 When I say tossing, I'm not talking about up in the air spinning - I've tried that and haven't found a reason why the benefits of spinning outweigh the risks of dough on the floor.  Rest the dough on top of your fists and stretch it from the center.  Do this in circles.
When it's all an even thickness, lay it on a silicon mat - or whatever, maybe you're a pizza stone person, in which case, you'll want to top it and then scoot it onto your stone.  That's not my thing.  Also, I don't even try for round, but you could totally make it round.  I think they call this "rustic".
I like to go for about this thick, but you might like crust more than me.  I'm four years old, I leave my crust behind for Sous Chef Brian to eat.  He asked me to call him that, by the way. 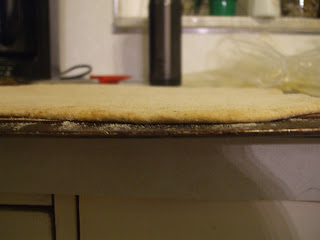 Put a few tablespoons of sauce in the center of the dough, and spread it around with the back of a spoon. 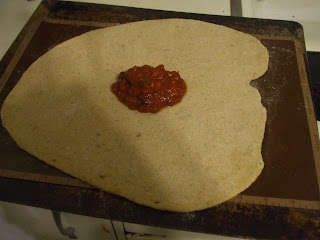 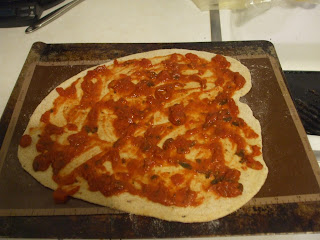 I like to sprinkle parmesan under the toppings, in almost any pizza I make, but really, what you do from here is up to you. 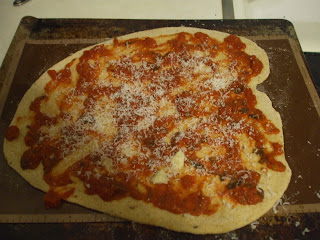 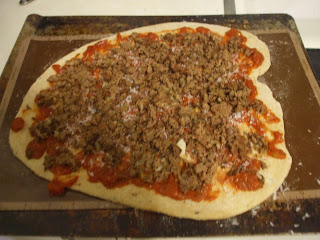 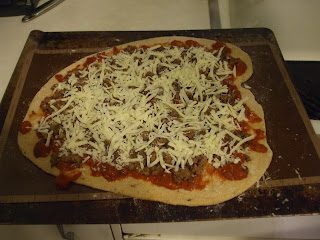 And put it in at 400 for about 12 minutes - touch the crust every so often to be sure it's not burning or getting too hard, and not gonna come out raw. 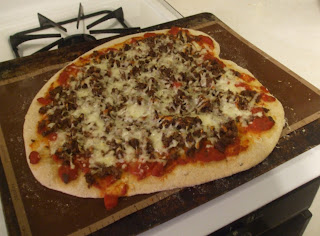 Nom!  A pizza like this serves 3 comfortably.
Got ideas for what I should make next? Want to complain about my nonstick cookware? Have an awesome pizza topping to recommend? Email me and we'll chat.

Simplified Recipe
Dough:
1/4 cup warmish water plus another cup
1 tablespoon honey (or sugar)
1 packet instant yeast
2 tablespoons olive oil, plus some more.
2 cups whole wheat flour
1 1/2 cups bread flour (you can play with the proportions)
1 teaspoon salt, plus misc pizza spices
Add yeast to 1/4 water and honey to proof.  When foamy, add 1 cup water and olive oil.  Add flour and combine into a single thing.  A shaggy mass.  Let sit covered 20 minutes to hydrate.
Knead aggressively 7 minutes or until smooth, and form into a tight ball.   Swirl around in an olive oil-coated bowl and cover.  Put in a warm quiet place to rise for 1-2 hours.
Meat"ball" topping:
1 teaspoon olive oil
1 shallot (or some onion and garlic or whatever)
1/2 pound meat (bison, beef, turkey, fake meat)
Spices, etc, to make it taste like your meatballs.  How you make them.
Get the shallot started in the oil, then add meat.  Season up and brown.
Sauce:
Seriously, just make your usual sauce or use a jar.
or
1 can Muir Glen tomato sauce
1 good handful frozen "fresh" oregano
3 cubes frozen garlic
3 cubes frozen basil
1 tablespoon sugar
Salt, pepper, onion powder, red pepper, etc.
Cook on low (like, as low as you can go without the flame going out) for an hour, or however long your dough is rising.
Also:
Cheese.  Parm and Mozz?
Putting it together:
Roll out dough flat, like a quarter inch or less. Add 3-4 tablespoons of sauce, spread thin.  Sprinkle with parm.  Add meat.  Add mozzarella.  Bake at 400 for 12 minutes or so, minding the crust.
Posted by Rose