Sweet and Sour Seitan - for realz


Early in the blog, like, more than two weeks ago, I mentioned this dish, but it was just leftovers.

I'm fairly impressed with myself, since I haven't made the same dish twice (excluding leftovers) since I started this in late January, but today I broke that streak. When I made it the first time, I had never fried seitan and I followed a recipe exactly, which is so not me.

So this is take two, based very much on the recipe on Vegan Yum Yum, but you know, tweaked.

First I made the sauce, and look, I successfully managed to photograph all the ingredients!

Then I breaded my seitan, 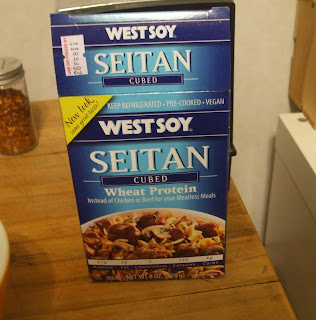 which is strong language for the simple thing I did. I mixed a quarter cup of cornstarch with several dashes of red pepper flake 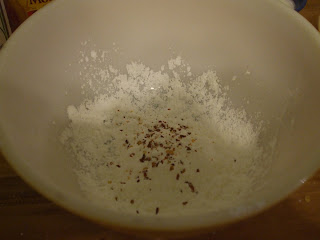 and coated the seitan with that. 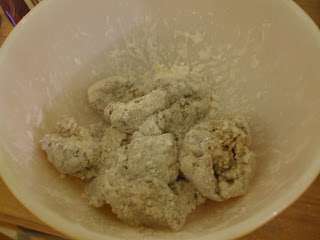 Then I asked sous chef Brian to cut up some veg, and first he took this insightful behind-the-scenes shot of the glamorous lifestyle we lead, and how we're able to keep this shit going.

Then I fried the seitan. I put a quarter cup of safflower oil in a wok, and got it hot. It's hot when your first piece of seitan does this: 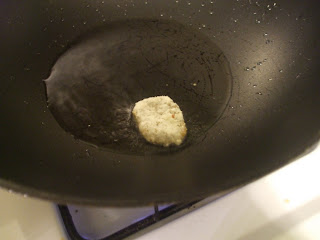 This is real frying. You don't want to eat a quarter cup of safflower oil. Make sure it's good and hot, because then the food absorbs less of it. But still, this is Fried Food. The first fried recipe I found in a quick search on Allrecipes.com has a note that they calculate the nutrition based on the food absorbing 10% of the oil. You can check this by measuring your oil before and after cooking. I'm fairly certain the seitan absorbed less than half the oil, but more than 10%. This is Fried Food.

So I added the rest of the seitan and tossed it around frequently. 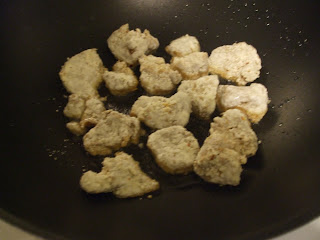 With meat, you want to let it sit a bit, build a crust, etc, but this is corn starch, not protein. Move it around. Let it get brown on all sides, keep it going.

When it's good and browned 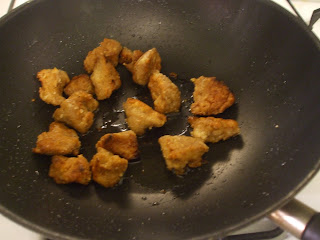 move it to a towel to drain.

Now we make sauce and cut up veggies. We had peppers and zucchini and onions and garlic, which I had leftover from the veggie sloppy joes. I think the onions and garlic are the only thing I'd say are needed, then whatever veg you've got. Last time it was broccoli. That sauce we mixed earlier? Put it in the smallest saucepan on low. 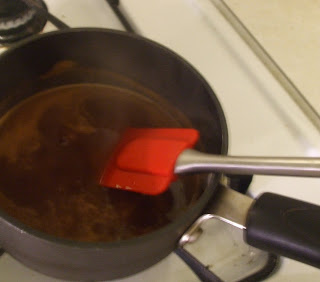 Once it's all mixed, you should have something that's the same texture as good barbecue sauce.

Turn it off and set it aside.

Drain the oil from the wok and give it a wipe down. You don't want it bone dry, but you're having Fried Food, cut back where you can. 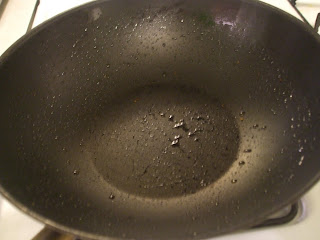 Start with the onions, but don't go all the way to translucent. You want some real bite left to them (texture wise). 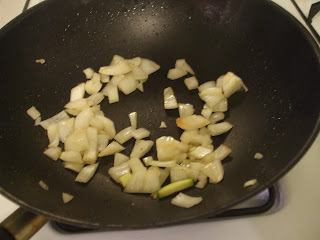 Add your veg (diced, strips, whatever) 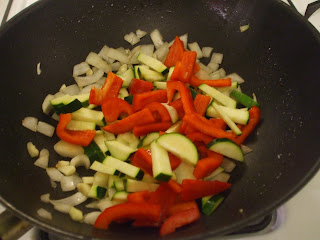 and move it all around on high heat for a bit. I wanted them to be halfway between raw and cooked - still crunchy but not quite crudite. Brian does not like his vegetables "squeaky," which is a concern with green beans, but you don't want floppy sad veg either. 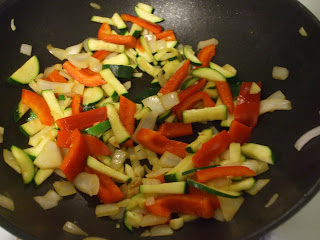 Want rice? Whoa, it's a little late in the game to start thinking about rice. Yeah, if you eat real rice, get that started half an hour ago. If you're me, go to the freezer and pull out a bag of frozen brown rice. Give it two and a half minutes in the microwave. 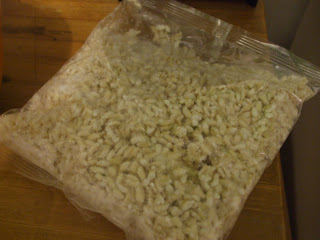 I'm not trying to do some Sandra Lee shit here, I'm not going to tell you to put lumps of canned frosting on a plate and call that dessert, but I'm probably not going to make my own seitan out of wheat gluten either.  I worked late tonight.

So, the rice, however classy your means of cooking it, gets added into the veg, and the seitan goes back in too, and the sauce. 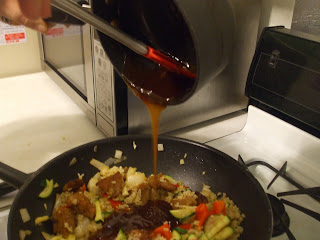 Give it a few stirs, let it all warm back up together, and that's dinner. 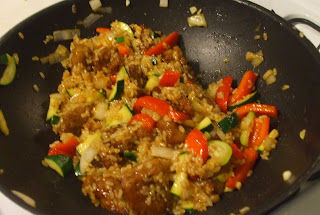 This made three SOLID servings. I don't think it looks like much in the bowl, but we were both like "moo" (that's what we say) after eating it. We had enough left over for two small or one big lunch portion.

I'm not going to post a simplified recipe here, because seriously, I stole most of this from here and I'm a researcher, and I cite my sources.

I used more sauce - more vinegar, more tamari, and I felt it was important to bring in the onion and garlic and the red pepper flake, but it's pretty much that recipe. I know our pictures look really different.

Got ideas for what I should make next? Email me and we'll figure it out.

So far I have requests for cheese spread and food without sugar. You could do all of this without sugar, just change the sauce.  Make a chili/soy sauce or ginger/lime.  Or if it's refined sugar you're avoiding, swap the sugar with honey or agave.  Or juice.
Posted by Rose