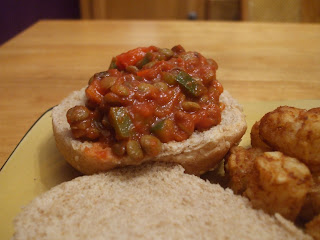 I really like sloppy joes.   They're sweet, spicy and tangy and they are (they have to be) on a soft roll so all of that flavor seeps into the bread. I haven't had the stuff in a can in a long time, but a few months back I figured out a sloppy joe sauce that I think tastes better than the stuff in the can, and Brian says that with bison it makes the best sloppy joe he's ever had.

Recently, at Good Dog, I had a vegan sloppy joe, where lentils were the "meat".  My mind was blown.   All this zesty goodness without the meat!  (I like meat, as in, I don't see myself going completely meat-free in the near future, but I really appreciate finding meals I love without it)

So this week I decided to try it at home.


By chance, I went to Trader Joe's to do the weekly shopping, because we needed shampoo and we like theirs.  I usually go there about once every two months, the rest of the time I'm at Whole Foods (complaining the whole way).  Before we moved out here, our local mainstream chain grocery store had a wide variety of "natural" and "organic" foods (I get that those words don't necessarily mean anything, and I'm sure I'll post about it in-depth soon), and it was fine to shop there, supplemented by an occasional Trader Joe's stop, but here, the Acme and the ShopRite don't have much of what I want.   So I go to Whole Foods and complain about it.  Like, it's a million dollars and they don't have organic bell peppers.  So I can typically only get bell peppers at the farm market when they're in season.  Because they're on the bad list.

Anyhoo, I went to Trader Joe's and I typically walk right past their produce aisle, because things are over-packaged and weird, and it's small and feels much more prepared than fresh.  This time, I was surprised to see (packaged) organic bell peppers and zucchini and such.  I make some (minimal) effort to eat dark greens and squash in the winter and bell peppers and zucchini in the summer, but like I said, just minimal effort.  So ignoring that these foods shouldn't exist I bought them. (It's not like I bought tomatoes, that'd be disgusting)  I stocked up on fresh out of season veg from somewhere across the world, and soft whole wheat rolls.

The first thing I did was put on a pot of lentils - 2.5 cups of my veggie stock (or someone else's) and a cup of lentils and simmer for the whole time you're cooking other stuff --a little over half an hour? You want to like the texture, so keep trying them.  I thought it was important that they still had some bite to them, but I don't want to bite into an undercooked "bean" ever.

I chopped veg.  Seriously, I chopped a lot of veg, and in the post-game discussion after dinner, Brian and our guest and I agreed we'd have liked it better if it was all chopped smaller.  So, if you're making this, look at my pictures and see what you can do.

I chopped up four large white mushrooms from the fridge that I had meant to use on something else. 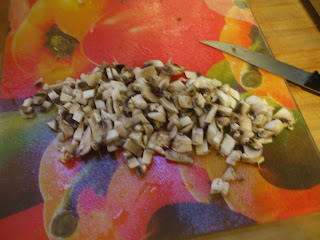 And "a carrot" - if I had regular carrots, I'd have used a large carrot, but instead I used about a large carrot worth of baby carrots. Maybe a carrot and a half? 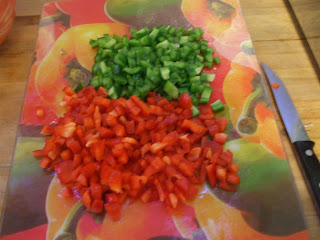 And a white onion, and three large garlic cloves and a small one. 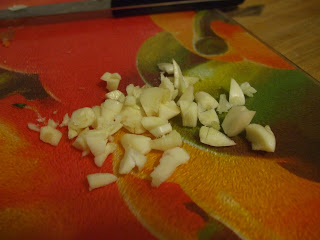 I gave the onion a head start in a tablespoon of safflower oil, and let it get translucent, then added the garlic. 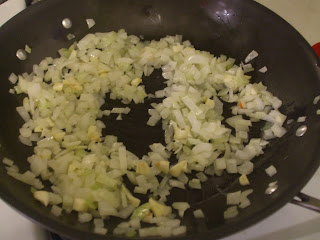 When it started smelling really good (it doesn't take garlic long, if you're a garlic person) I added in the rest of the veg. 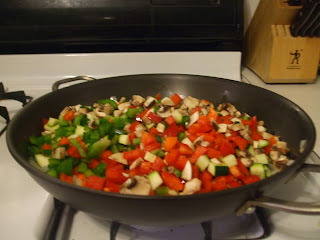 I tossed them around on medium for a bit, then added a quarter cup of veggie stock and put a lid on it for a few minutes while I grabbed sauce ingredients.

I'm not a mise en place kind of girl, though I buy prep bowls like I'm going to be.  I'm not a recipe kind of girl.  I operate more like "run around the kitchen, grab whatever I think I might want to use, use some, put it away, frantically look for it again when I decide to add more."  So this picture is missing apple cider vinegar, and salt and pepper, and paprika and cayenne.  A note on the cayenne, I had totally meant to use some of the extra jalapenos I bought, but got scared off as they were super powerful, so I went to powder instead.  This would do nicely with the addition of a real pepper, but a real pepper you're comfortable with. 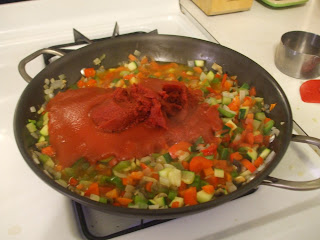 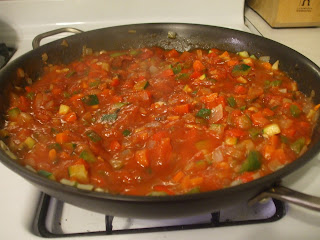 There is nothing urgent going on at this point.  Everything is hanging out together, getting saucy, so check on the lentils and see how long they need.  Magically, that's exactly how long this sauce should simmer.

Add the lentils and give it five minutes together (or a bit longer, not so long that lentils are mushy though). 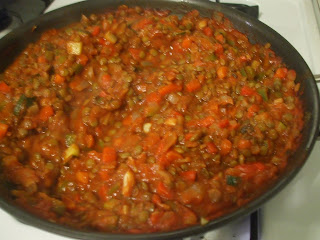 Serve on fluffy soft rolls.  We were excited to try out Trader Joe's "Potato Tots" - I can't go there and not buy frozen food, which is part of why I go less often than other stores.  They're made of food, and better than whatever we grew up with. 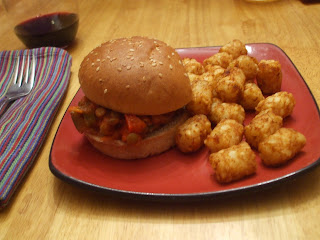 This made about 12 sandwiches, so my freezer is stocked.  I don't know how to halve a can of tomato paste, but you can give it a shot.  I just wouldn't use the other half.  I think I'll use the leftovers as a starting point for chili at some point in the future, in addition to another round of sloppy joes.

After most meals there is a conversation about what could be improved.  We all liked this, but I think in switching out the meat for lentils the flavor was dulled a bit, so in the recipe below I've made the adjustments that I'll use in the future (more vinegar, more spice, more sugar).

Also, our guest had the awesome idea of topping the sandwich with a few breaded jalapenos that were too spicy to eat as a snack - while I doubt anyone else has those on hand, this is just another way of saying be sure to make it spicy enough.

Saute up the onions first, then garlic, in a tablespoon of oil
Add a quarter cup of stock and the rest of the veg, stir a bit, cover for a few til they're softer
Add everything else except the lentils, let mingle and simmer
When lentils are done (not mushy) add lentils and simmer some more