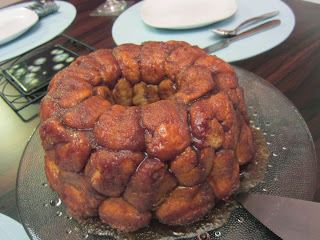 It's hard to cook things you don't care much about.  So dessert just isn't a thing.

But as I perused the interwebs and the cooking shows and the food magazines over the past year or so, I kept seeing monkey bread.  I've never eaten monkey bread, and I've never seen it in person, but it's been everywhere lately and I'd like to think that the issue is not that I'm following a trend, just that I needed to try this. As soon as possible.

I read 47 recipes for monkey bread.  Here's the gist: make white bread.  Roll it in balls.  Sugar and butter. Bake.

Most of the recipes I read used canned biscuits, but that's not my style and Cooking Light made their own bread so I made a bread a lot like their bread too.  They also used a cream cheese glaze and that's also not my style, so I just went with the bread. I didn't do it word-for-word, but it was close.  Their bread had OJ in it, and I wanted to take that nine steps further, so I added orange zest and orange extract and orange liqueur (a word I can't spell without Googling).

Honey and warm milk in a mixing bowl, with yeast, whisked and let sit until fluffy. 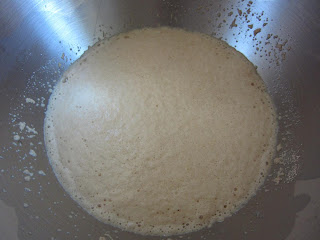 You're going to need both zest and juice, so start with a whole orange.

Before squeezing your orange, zest it and reserve the zest. 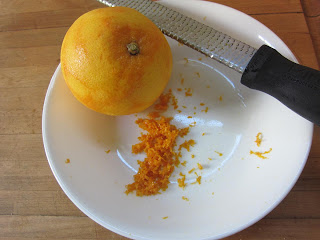 Now that you have a zested orange, play catch.  If you're alone, just roll it on the counter, but if you have a kitchen buddy, throw the orange around.  Sous Chef Brian took a step backwards into the dining room each time I threw it until we were in serious danger of smashing the new china cabinet. Once it's all squishy, juice it. Or ask your spouse/kitchen buddy to do that. 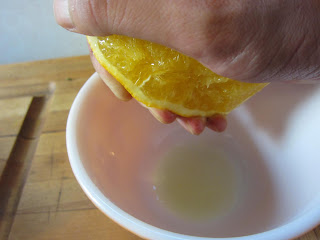 Back to the dough. Mix in flour, salt, orange juice, melted butter and knead. 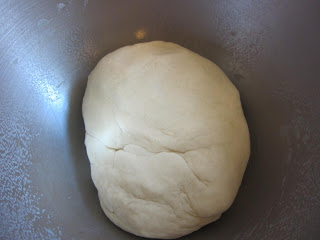 When smooth, set aside to rise for an hour until doubled. 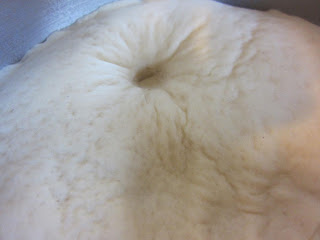 I waited a little too long and mine got a bit of a skin, but it's ok.

Divide into 6-10 pieces and roll into logs.  Then cut off one inch nubs like you're making gnocchi.

Make your topping.  Remember that zest you set aside?

Grab a zipper bag.  Add the zest of one orange, which the internet says is about two tablespoons--I think I got about a teaspoon off my orange, so do what you can, and if you get more, that's better--one tablespoon of cinnamon, a cup each of brown and white sugar. 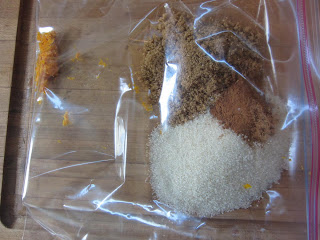 Give it all a shake in your bag.  It'll be wet and clumpy where the orange is, so break up those clumps through the bag with your fingers and shake some more. 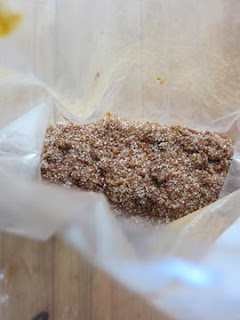 No really, smell it! 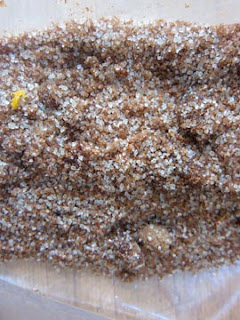 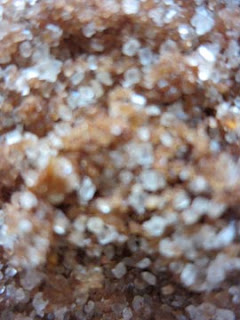 I know, right?  It's all orangey and cinnamony and awesome.

Now here's the really neat part where I didn't take any pictures.  Right then, a friend showed up unexpectedly.  So there's a half hour lag here where there aren't any pictures.  Ok, it's more like an hour and a half.

You have those little one-inch gnocchi bits of dough now, right?  You know how the surface of the dough is smoother than the inside, like the inside is stickier?  Turn your dough balls inside out.  Get the sticky part on the outside.  In groups of like 6, drop the dough balls into the bag of sugar and stuff.  Shake.  If they're not picking up as much sugar as you'd like them to--because you're used to dipping your balls in butter first and I just am not ok with that technique-- sprinkle them with some water.

When the balls are coated, drop them into a greased bundt pan.  Keep doing this.  Load your bundt pan with dough balls coated in sugar and cinnamon and orange zest.   If you have extra sugar in your bag, sprinkle that in between layers.

Set it aside to rise again, until the balls come up to the edge of the bundt pan.

Once it's risen, melt 3 tablespoons butter with a tablespoon of orange extract and pour over everything.   Then, into a 350 degree oven for like half an hour.  The balls should feel firm and the sugar on top should have crystallized some.   Take it out of the oven and invert it over a plate, and make some glaze.

People do cream cheese, powdered sugar, etc.  I did alcohol.  An airline bottle of Grand Marnier, or any other orange liqueur, and a quarter cup of brown sugar, stirred together over medium heat until they were one thing.  Pour that glaze over the bread. 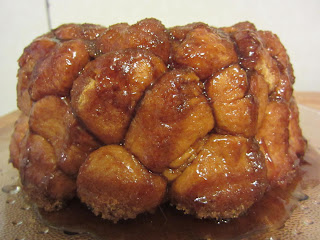 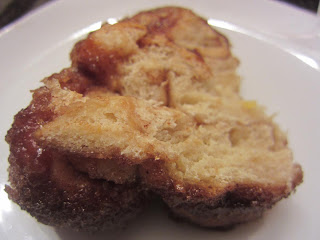 The bread itself wasn't sweet, but it was coated in tons of sugar, so on the inside of each bite you got a chewy break from any overwhelming sweetness.  I'm going to do another one of these in every flavor.  Straight up cinnamon.  Lemon.  Maple syrup.  Etc. 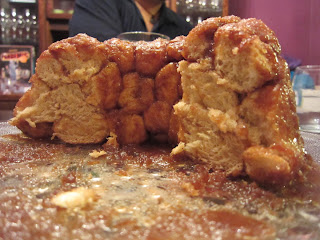 It was awesome for breakfast the next day too. 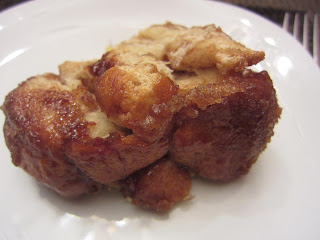 So I didn't quite use the Cooking Light recipe, but I didn't use the two sticks of butter some other versions call for.  I ran it through Nutrition Data (with some fudging, since that website doesn't acknowledge the existence of liqueur) and we're at about 300 calories per serving.  That's not an unsweetened iced tea, but it's no banana split either.  It's dessert.  Or breakfast.  Either way, it's delicious.

Orange Monkey Bread
by Saturday's Mouse August-13-2012
Soft, orangey balls of dough coated in sugar and glazed with orange liqueur! Really! Don't freak about it taking 3.5 hours, most of that is rise time.
Ingredients
Instructions
Warm the milk to 100 - 115 degrees, and whisk with honey in your mixing bowl. Add yeast, stir together, and let froth. In the meantime, zest and juice and orange. Bounce or toss the orange a bit to get the most juice out. Melt 2 tablespoons of butter, and add that, the orange juice, flour and salt to the yeast/honey/milk. Knead, either by hand or by mixer until smooth. Set aside to rise until doubled. Divide dough into pieces (6-10, depending on how cooperative your dough is) and roll each into a rope. Cut off one inch sections from each rope. In a zipper bag or huge tupperware, add your cinnamon, white sugar, orange zest and 1/2 cup brown sugar. Shake to mix. Take each of your 1 inch dough bits and invert into a ball, sticky side out. Drop a few into your sugar mix at a time and shake.As dough balls become sugared, drop them into your bundt pan (greased or silicone).Once all dough balls are sugared, set bundt pan aside to rise one more time, until dough reaches top (bottom) of pan. Melt 3 remaining tablespoons of butter with orange extract. Additional juice could be used here, or liqueur. Drizzle over dough balls. Place balls in preheated 350 degree oven. Bake 30 minutes. After 30 minutes, invert bundt pan but don't shake the bread out. Make glaze by melting remaining 1/4 cup brown sugar and entire airline bottle (50 ml) orange liqueur (I used Grand Marnier) in a pan, stirring. Release bread from bundt pan, drizzle with glaze and serve warm.
Details
Prep time: 3 hour Cook time: 30 mins Total time: 3 hour 30 mins Yield: 12 servings
Posted by Rose