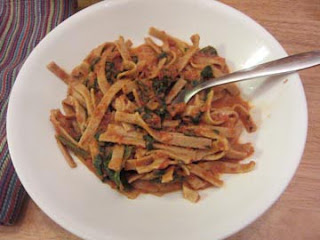 There's a whole debate over whether vodka sauce is really a food, or if it's a 1980's food trend that refuses to die.   Chowhound has some decent conversation on the topic, and folks land on both the "vodka makes tomatoes taste better" side and the "this isn't really food" side.  More than 10 years ago, NYT said it was food, but that might have been too close to the 80s.  If you were to Google it, you'd find additional sources on the debate.

I think it's food.  But since I wasn't all that aware of what was food before the 80s, what do I know?  I make cream sauces without vodka, and they're good, but in my silly little opinion, vodka sauces get you to the magical place of pepperyness balanced with sweetness, and I don't think a sweet cream sauce with some pepper in it does that as well.

It's not a very different process, but sometimes you've got your own red gravy on hand and want to make it more exciting, and other times you're cooking from scratch.

Last time I did this, it was vegan vodka sauce from tomatoes.  This can be vegan too, just skip the cheese and use cashew cream like in that recipe, but follow the steps in this one.

I happened to have some cream on hand, rather than cashews.

I started with a quart of my fairly standard pasta sauce, defrosted.  This one was a bit basil-heavy, which worked nicely.  I've done it with fancier sauces too.  You can open a jar of whatever or defrost your own.

With a quart of sauce, I added a shot of vodka.  If you have pepper vodka, OMG, do that.   If you have more sauce, add more vodka, less, less.

A sprinkle of red pepper flakes. 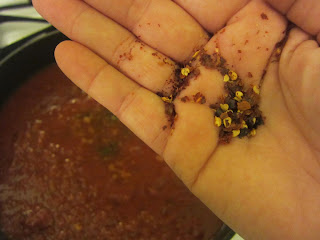 And a bunch of chard (spinach is great too) defrosted.   This is totally unnecessary, but it works, and I like to put greens wherever they work. 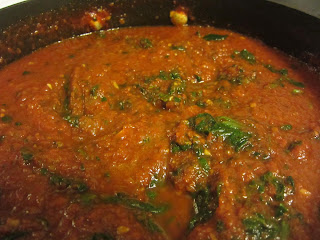 I let it simmer like that for 20 minutes.  Do it until the steam off the dish doesn't burn your eyes.  Taste it.  Is it too vodka-y?  Ok, then cook a bit longer. 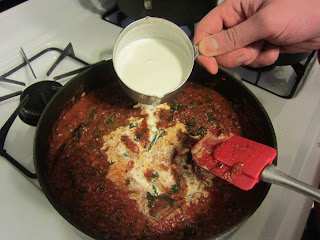 Stirred that in well. 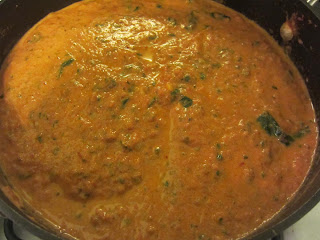 And added another 1/3 cup of parmesan.

And there's your sauce. 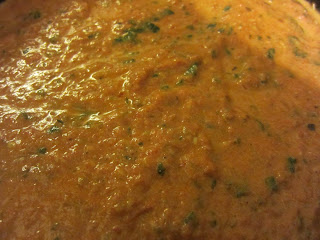 Sure, penne.  Whatever.  I had some cooked spelt noodles.  Six servings or so. 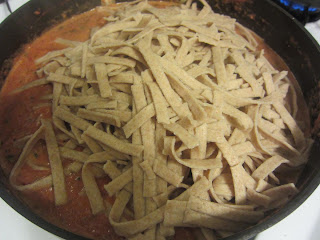 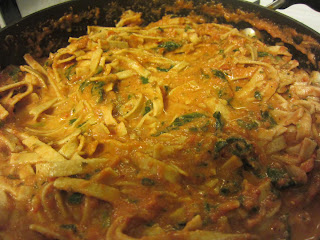 And get it on a plate. 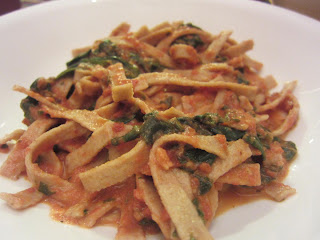 A quick salad and you've got dinner.  Fancy, 80s-style dinner.
So go set up the VCR and watch Say Anything or Working Girl while you eat this. 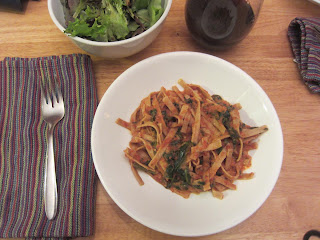