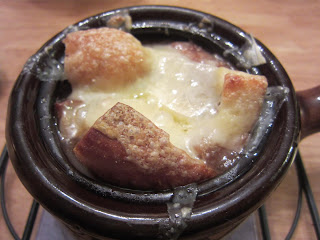 I love this soup.   Who can beat cheese and onion in rich broth?


But like so many restaurant foods, when we started cooking at home a lot, the restaurant versions all seemed too salty.  I don't order it anymore because there is just too much risk of it tasting like a salt lick.  Soup's tricky that way.  But if I make it, I'm in control.


There are a lot of onion soup recipes out there, with some variation.  Some folks insist you need to use yellow onions, or white, or Vidalia or red.  There's the white wine camp and the red wine camp and the cognac camp.  There's apple cider in some, and balsamic vinegar in others.  Some recipes include three hours of baking onions.   Some use chicken stock, some use beef stock and some use a mix.


This is a fairly quick*, delicious soup.  It's hearty and cheesy and warm and rich and a bit sweet.  You could even make a vegetarian version with mushroom stock.

Since I'm not doing a vegetarian version, I needed to start with beef stock.  Several weeks ago, I ordered something called "soup bones" from the buying club.  This was new territory for me.   I'm not going to show pictures, because that is somewhat horrifying, but I made a bed of rough chopped carrots and onions and celery and garlic, and spritzed everything with olive oil, and put the bones (ok, it was one huge bone) on top.  The bone had a good amount of meat on it, so that all roasted together with a tablespoon of tomato paste (I read that somewhere) and hung around for about an hour in the oven until it was roasty.  Then I just simmered it on low all day, and strained it FOUR TIMES.  The last strain was after a night in the fridge, and the fat had all congealed on the top so it was pretty easy to remove.


I told my mother I was making this and she said it was funny, she was going to make onion soup soon too.  And I said, "Are you making the stock, or buying it?" And she said she planned to make the stock, and asked what that entailed, and I told her and she decided to buy stock.  So, you know, make your own decision.  I'm saving salt this way.


But really, what you need to start with are onions.  I used red.  Other folks have other opinions.  I used three pounds of red onions, which was four huge onions.


I sliced them, but not paper thin.  I considered busting out the mandoline for this, but I figured with the caramelization, they were just going to turn to mush anyhow. 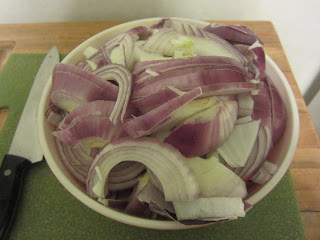 With four tablespoons of butter and a tablespoon of olive oil, 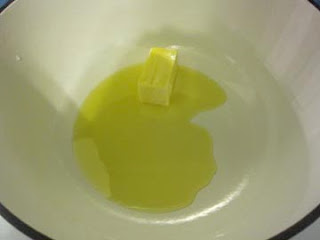 I set them to caramelize. 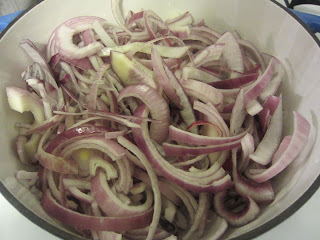 Then I chopped up some shallots to add depth. 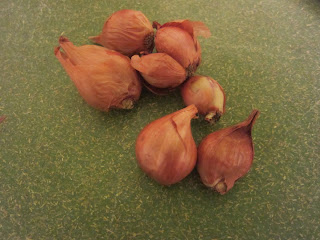 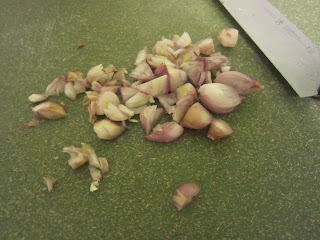 After about 10 minutes on medium-high, when they were soft and turning sweet, 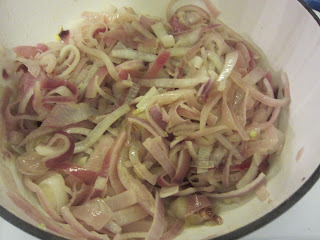 I sprinkled on a half teaspoon of kosher salt. 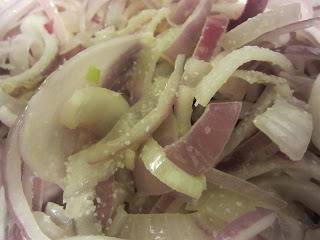 Then I let them keep caramelizing for the rest of an hour, stirring just occasionally.


This is an hour.  Look at that fond. 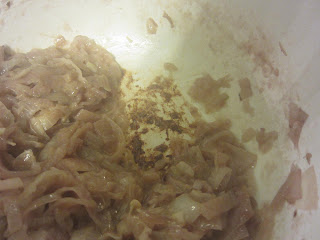 They're pretty much a liquid. 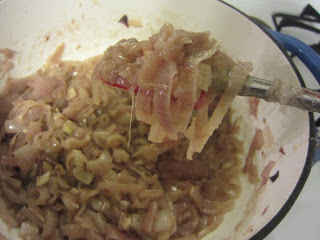 I sprinkled a third cup of flour on top and stirred to coat. 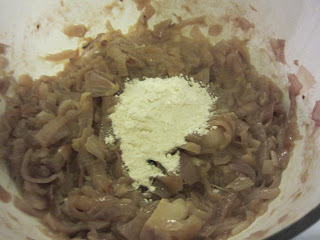 They cooked for about five minutes.  Then it was time to deglaze.


I put almost a cup of malbec - more than 3/4 - in a measuring cup, and filled the rest with balsamic vinegar. 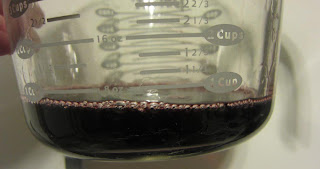 Folks use all sorts of wine for this, so feel free. 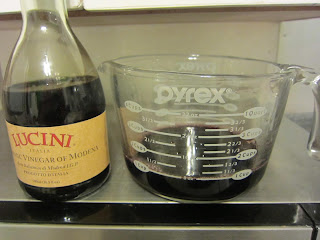 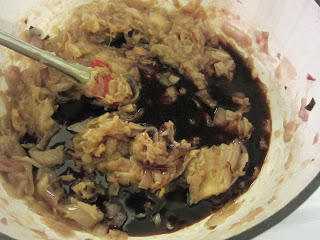 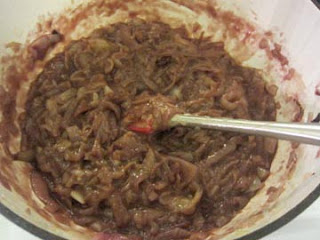 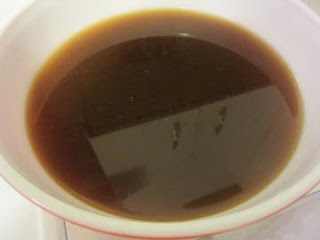 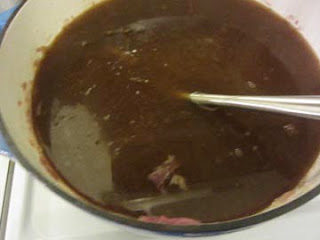 And herbs and such.  A bay leaf.


A little more than a tablespoon of fresh (frozen) thyme. 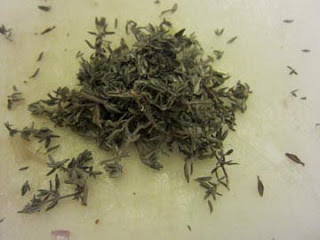 A good bit of black pepper. 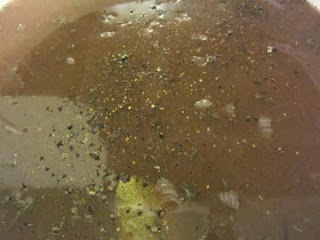 Now let it simmer.  40 minutes?  Until it's all come together and you're ready to eat.


Meanwhile, find some bread.  I keep the ends of bread in my freezer, but a normal person might need to get a baguette.  I've got a lot of soup here, but I only need enough bread ready for four servings - two tonight, two for lunch tomorrow and the rest will freeze.  So I dug up a piece of french bread and some miscellany. 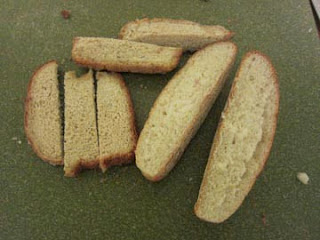 I cut it into cubes and toasted it in the oven.


When the soup was done, or rather, we were ready to eat, because it had been simmering an hour at that point, remove the bay leaf 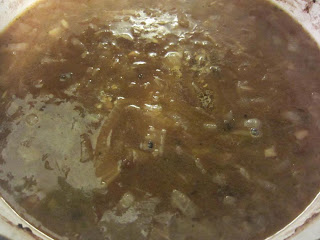 and pour it into individual oven-safe bowls** - on a rimmed baking sheet.  I happen to have made a good decision at Goodwill years ago.  Sometimes I buy stuff and it just sits, other times I get soup crocks. 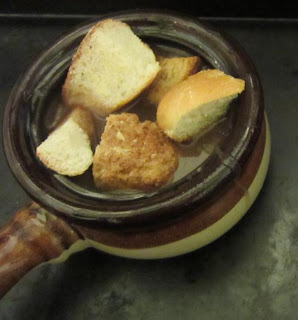 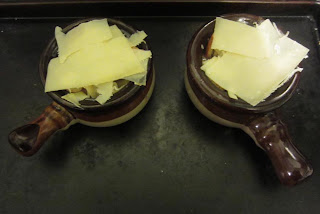 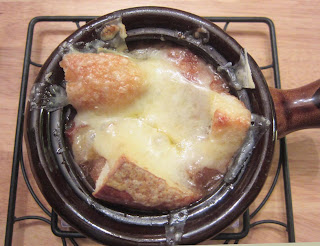 Have it with a salad, not only because it's beef stock covered in cheese and you just should, but also because it's piping hot right now.  Have a conversation. 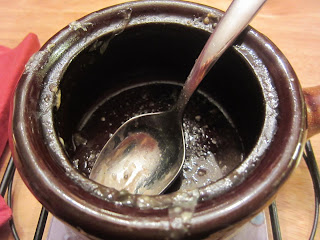 Remember how I only added a sprinkle of salt to the onions when they were caramelizing?  The only salt here is that, plus the cheese, plus whatever's in your bread, so maybe sprinkle your bowl lightly.  Taste first.

This made eight to ten decent sized servings.

*soup quick, not like, grilled cheese quick.
**don't have an oven safe bowl? No worries.  Melt cheese on bread in the oven, and toss that on top of the soup.


This recipe is cross-posted at the blog for the South Philly Food Co-op, whose mission is to open a member-owned cooperative grocery store that provides affordable and nutritious food to all residents of South Philadelphia while empowering the local community through sustainable practices, food-centric education, outreach, and community building.

French Onion Soup
by Saturday's Mouse December-20-2011
Warm and rich, slightly sweet and cheesy.
Ingredients
Instructions
Slice onions and chop shallotsHeat butter and olive oil on medium.Add onions and shallots and caramelize on medium, stirring occasionally. After 10 minutes, sprinkle with kosher salt and stir. Visit and stir occasionally, but allow onions to stick a bit and create a fond on the bottom of the pot. Leave to caramelize about an hour or until very soft. Add wine and vinegar. Scrape fond from pot. Add stock. Heat to simmer. Add bay leaf (remember you'll have to remove it later), thyme and black pepper. Simmer 40 minutes or so. Meanwhile, toast croutons and slice cheese. When soup is done, pour into individual oven-safe bowls, top with croutons and cheese and bake until melted.
Details
Prep time: 10 mins Cook time: 1 hour 50 mins Total time: 2 hoursYield: 8-10 servings
Posted by Rose