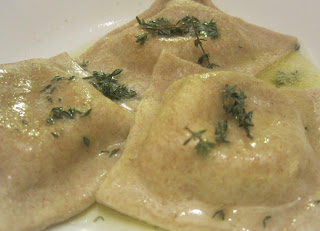 It's half whole wheat and half AP flour, stuffed with roasted vegetables and some ricotta.  There's just something about roasted veg, the nutty sweetness, that works so well with whole wheat pasta.  This isn't a recipe, per se, since you'll use whatever roasted veg you have on hand.  It's more of a story of how I made ravioli for the first time, and how you can do it too.

Once upon a time, me and MSNDG and another friend who has yet to select an awesome blog nickname* were walking through my neighborhood the morning after a long night.  We were looking for brunch. My neighborhood is full of brunch.  And full of vintage-y used stuff stores.  So it's not weird that when we arrived at brunch I was holding a newly-purchased hand-crank pasta machine.  It's a little weird that we bought it on the side of the street from a woman who then started spewing hate and proving herself to be a crazy person, but not that weird.   We ate brunch and had several cups of coffee and two of us were able to face the day, and one of us (not it) went back home to bed.


So there I was, new pasta machine in hand.  Excited to use it.


A month later or so, I'm sitting at home staring at a pile of root vegetables, and Sous Chef Brian is at his late class and I'm like, "I'll just make up some ravioli, that'd be totally reasonable."


This is what I had, from this week's final farmshare haul.  I ended up supplementing with some supermarket carrots that I already had on hand.  You use what you have, but I liked having both peppery veg and sweet veg.  I own a butternut squash, but since, for safety reasons, I refuse to cut squash without supervision, it sat uncut and uninvolved. 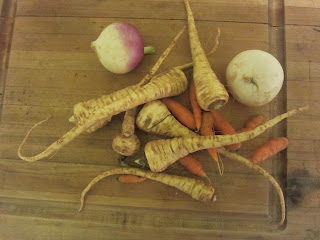 I no longer peel carrots unless I have to.  If they were pesticided, I might, but these aren't they're just dirty.  Turnips, I peel.  And I had to Google the parsnips to see if it was ok not to peel them.  They were pretty skinny and I thought they might be impossible to peel.   The interwebs gave me the green light, so I didn't peel the parsnips, but I did scrub them with a green scrubby. 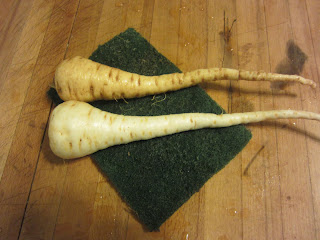 So I felt pretty good about that.  Again, I'd behave differently if they were pesticided.


I diced up all the veg, not very concerned about size or shape because they were going to be pureed, but I wanted them to cook at about the same rate. 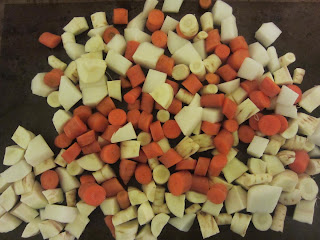 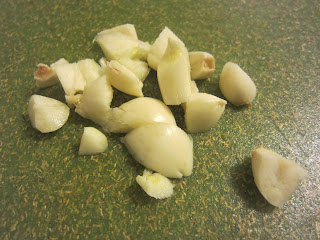 Tossed them in olive oil and black pepper. 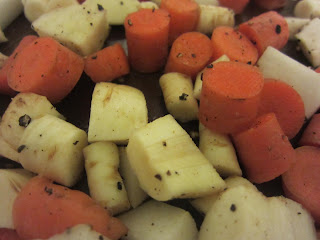 And threw them in my preheated 400 degree oven.  For 15 minutes, I left them alone.


Then I added my softer veg.  Mushrooms and onions. 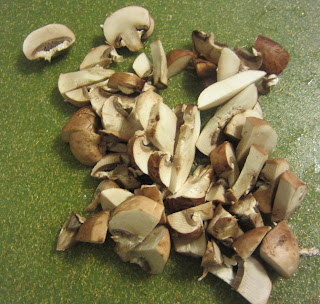 You ever open up an onion and find out that there's skin inside?  Like it's double wrapped with some good onion, skin, good onion again, and skin again?  What's with that? 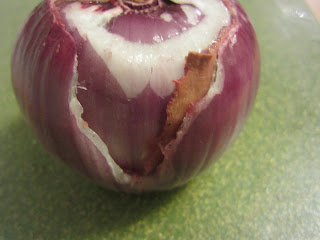 I cut the onion into rings and then tossed that and the 'shrooms into the existing veg.  Another spritz of olive oil and back in for 20 more minutes. 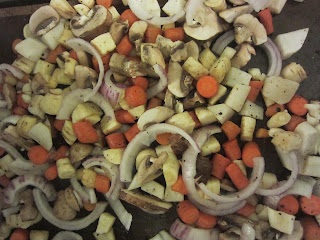 So while that was happening, I made pasta. 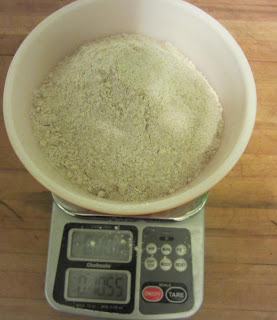 That's something like two and a third cups of flour.  I used half whole wheat and half AP.


I also wasn't about to do the pile-of-flour-on-the-counter-with-a-well-in-the-middle-for-eggs thing, because that sounded like disaster waiting to happen, so I used a bowl.   I whisked one egg at a time into the flour. 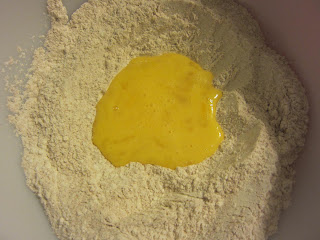 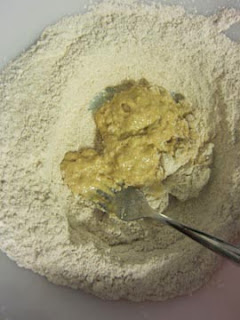 And then got in there with my hands and made it into dough. 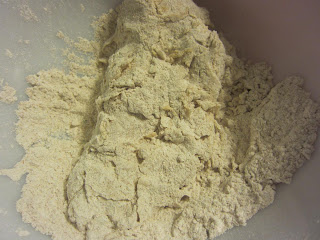 And eventually, formed it into a ball. 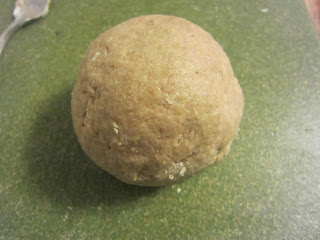 I kept my board very flour-y, and pounded the dough flat-ish.  I divided it in two, but then it ended up going into the machine in quarters. 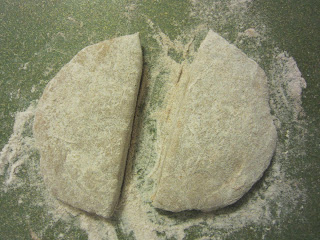 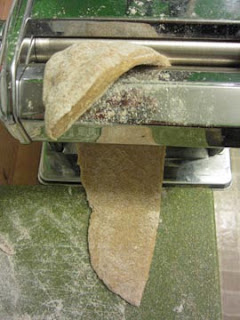 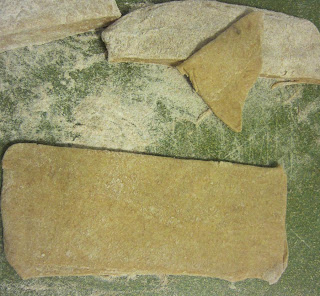 
Rumor has it, you can do this with a rolling pin.


I had what looked like giant shaggy lasagna noodles. 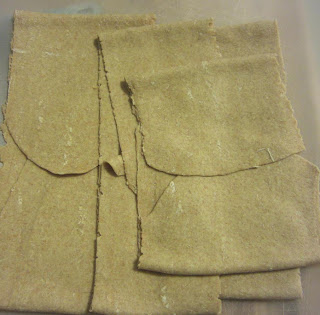 Four of them, which is important.


I let those hang out on the counter a bit, and made my filling.  My veg were roasted at this point - soft enough to serve, so I put them in a tall container and used my immersion blender on them.  You could use a food processor or blender or whatever.  I added just enough vegetable stock to let them blend, in this case, about a half cup. 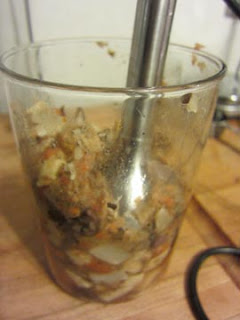 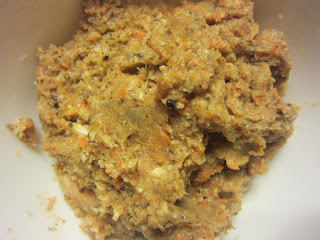 And I added ricotta.  Store-bought this time, but you can make your own like this. 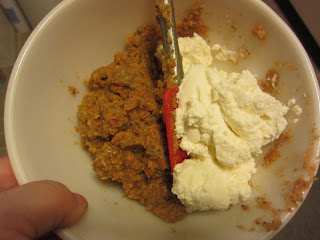 
And mixed that up. 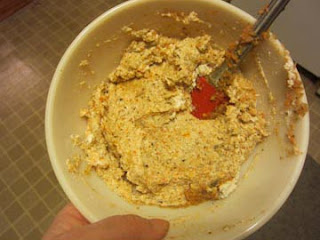 I dolloped the filling onto the pasta in heaping teaspoons. 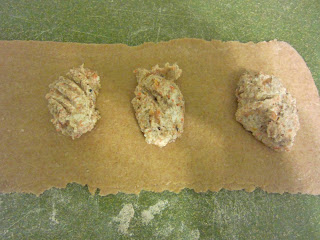 And then laid another piece of pasta on top.

I don't have good photos of this, but I cupped each lump of filling in my hands through the pasta to isolate the filling, then used my pizza cutter to make individual raviolis. 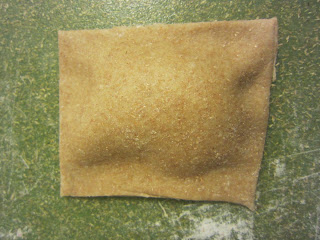 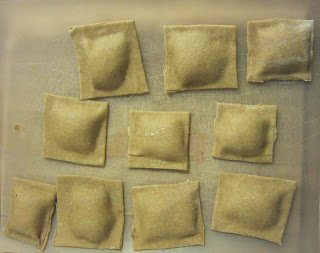 I ran my fingers along all the edges and pressed to seal.  They seemed pretty well sealed.  My 10.55 oz of flour and three eggs made 10 huge ravioli, and a pile of scrap. 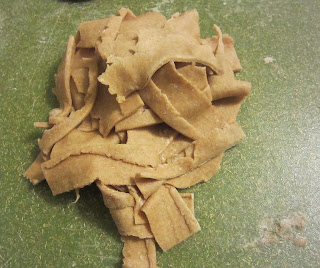 I had a ton of filling left over, which is chillin' in the fridge.

I set some water to boil and left the ravioli on the counter to dry.  I selected my widest pot for the water, figuring I didn't want to crowd the pot, and knowing that ravioli are done when they rise to the top.

Mine started out by floating.  Perhaps I needed a deeper pot.  I kept them on a gentle boil for 15 minutes, then fished them out with a slotted spoon. 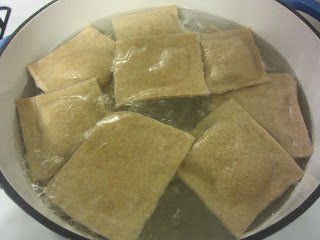 There was only one casualty. 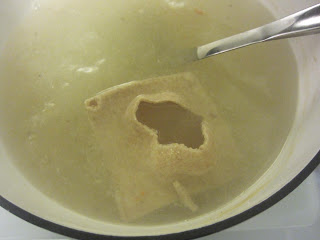 I melted some butter with thyme and serve them with that.  Three ravioli per person worked fine (they were big) and that means I have three more leftover for lunch. 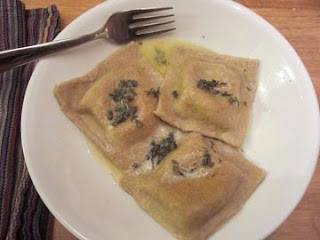 The roasted veg were sweet and peppery and nutty inside, and paired really well with the whole wheat pasta.  They weren't seasoned much, but didn't need it, especially with the herb butter sauce. 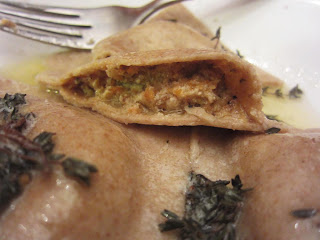 So I'm calling this a huge success.  I can make pasta.  I'm no longer limited by whether or not there's lasagna in the cupboard, if there are eggs and flour, I'm all set.  This is liberating.

*I gave the Half-Vegan her nickname, MSNDG was a joint effort, Sous Chef Brian chose that himself and no one else seems to want to be a character in the ongoing drama of how I create messes in the kitchen.
Posted by Rose