If I started this with the number of disclaimers and explanations I think are necessary, we'd never get to the recipe. The basics are that I made something like ricotta, and then used that ricotta-like cheese to make something like gnocchi.  And I should tell you now, I don't have a picture of the final product, because as much as I love to cook for the internet and the internet alone, life happens, and casually experimenting with cheese and gnocchi turned quickly into cooking for family I see very rarely, and running around the house cleaning up the weapons and pornography we typically keep in the living room.
When all of a sudden you realize a 6 year old and a 16 month old are on their way, everything looks like either a weapon or pornography.
So first, long before we knew we were having company, I was like, "Let's make ricotta!" because I keep reading about it, it's very simple, and I like ricotta and things that are made with ricotta.
So when we ran into Superfresh to pick up a few groceries we couldn't get at the farm market, I grabbed a half gallon of whole milk. 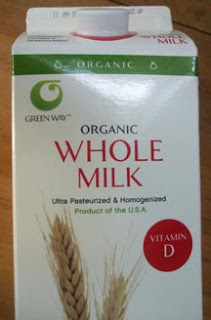 And once I got home with the milk, I was like, "Let's make ricotta gnocchi!" because I keep reading about it, its simpler than potato gnocchi and I like gnocchi.
So I started reading recipes for both.  That's how it works for me, typically, is I read everything I can find (in a reasonable span of time) and figure out which steps I want to cut out or what ingredients I want to add and generate my guess for a "better" recipe (maybe just quicker, maybe just adding a bit of nutrition, or maybe just more convenient for me at the time) - write down the plan and head to the kitchen.  Not like I know better than these folks I'm reading, but I do know better which steps I'm actually going to follow through on.
So it was at this point I noticed that several of the recipes said not to buy organic milk.  Organic milk is ultra-pasteurized, which means it's heated to a higher temperature, and this is why it lasts forever.  That process, apparently, screws with some of the proteins you need to make cheese.   But I had just spent $4 on a half gallon of full-fat cow milk, and it wasn't like we were going to use it for something else.  And I was not about to buy milk with added hormones and antibiotics just so I could make ricotta. So after being heartily advised not to, I decided to go on and try to make some cheese.
The recipes vary widely.  They tell you to use cream.  Buttermilk.  Yogurt.  Lemon.  Vinegar.  My plan was lemon and salt and milk.  The proportions vary widely.  I went for it with 5 cups of milk.
Also, salt.

I slowly heated the milk to 165 degrees, and let it keep going to 185, based on what I read here.  I'm not saying "oh, this is the right way, this is how it's done," and I don't know that the world needs another ricotta recipe, but I'm telling you what worked for me. At barely a simmer, I figured it was time to stir in the acid (lemon).  I added two tablespoons. 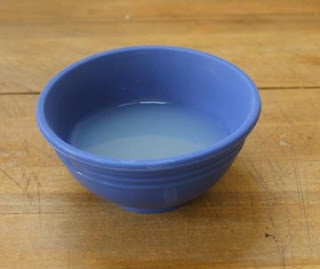 And stirred vigorously and turned down the heat.   I let it sit for 15 minutes and not a lot happened. 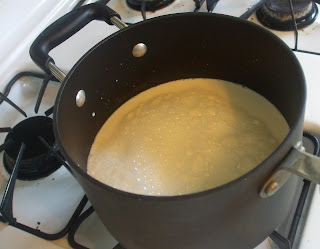 So I warmed it back up and added a tablespoon of white vinegar (the kind I really only use for cleaning and as fabric softener).  I turned it off at let it sit.   At this point I'm thinking, yeah, you can't use organic milk for this. 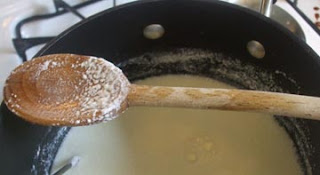 But when I came back, it was fairly curdly.  And as it sat, it got "better." 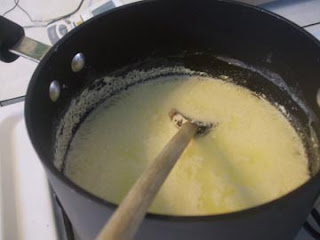 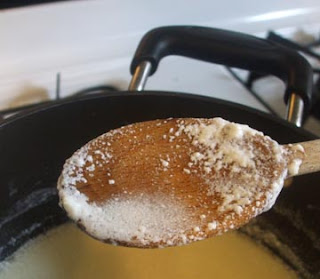 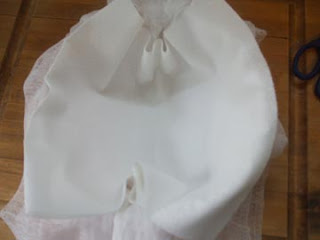 And poured in whatever was in the pot.  Curds and whey? 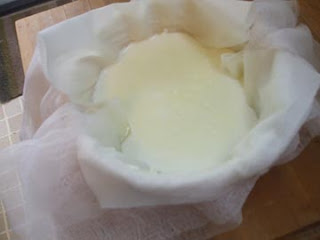 Eew.
And I gathered up the edges of the cheesecloth and wrung it out a bit. 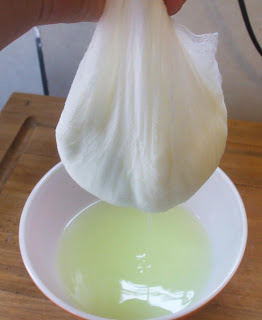 A lot.  It was wet.   There was a lot of squeezing of the cheesecloth. 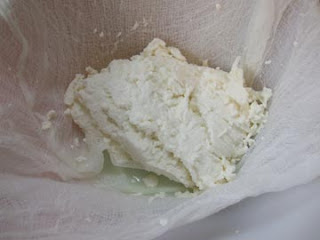 But what was inside was creamy and tasted like ricotta.   So I dumped it in a bowl. 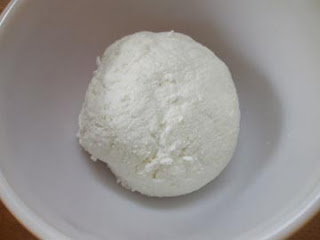 I stashed it in the fridge and then realized that it was less than a cup, and really, I needed more to make gnocchi.  So I did it again with the remaining milk (half gallon = 8 cups total).  I thought I'd do better the second time, so I started with vinegar, rather than lemon, and nothing much came of it.  So I added lemon and it got busy curdling.  So I'm going to say it's best to use both.
From a half-gallon of milk, I got about 10 ounces of ricotta.  This is not particularly cost effective.  Actually, I'm not sure.  I don't know how much of the packaged ricotta is liquid (the stuff I strained out) so maybe, but I imagine a 16 oz package of ricotta (including liquid) is like $3 and this cost $4.
I'm under the impression that if I had used the "right" milk, I'd have larger curds, but maybe my goals for ricotta-like cheese are different from the goals of the rest of the internet.  This worked.  I use ricotta as a creamy filling for pasta and such, and for the gnocchi, I think creamier was probably better.   So do what you will, with your cow antibiotics and growth hormones and whatnot in the conventional milk, or buy raw milk and pasteurize it yourself, but this worked fine for me.
Ready to keep going and make some gnocchi out of that?  Let's do it tomorrow.
Ever made cheese before? Let's discuss.
print recipe

Home Made Ricotta with Ultra-Pasteurized Organic Milk
by Saturday's Mouse May-2-2011
Fighting through it all to make creamy cheese with the milk I'm comfortable buying.
Ingredients
Instructions
Heat milk to just shy of a bubble, keeping it between 165 and 185 degrees. Stir in salt. Add lemon juice and vinegar and stir for 2 minutes, holding temperature below 185. Remove from heat and let sit to curdle, 15 minutes. Pour over cheesecloth into bowl or strainer. Squeeze out liquid or hang to drain.
Details
Prep time: 15 mins Cook time: 15 mins Total time: 30 mins Yield: 10 oz
Posted by Rose