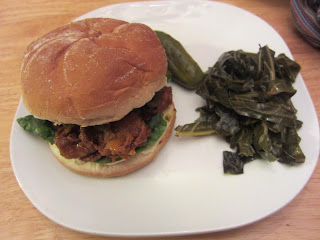 This really isn't a recipe so much as a dinner idea, or really, a suggestion for a sauce to put on a food.   Chewy seitan, crisp at the edges, drenched in your favorite barbecue sauce, on bread. You know I love the wheat meat.  Add jalepenos if you're feeling spicy, or pickles if you're feeling tangy.


The other day it was cold and yucky out and I wanted comfort food.  I started listing off things that would make me happy.  "Lasagna, or beef stew, or matzah ball soup," I told Sous Chef Brian.  He nodded at each suggestion, but then I followed up with all my negativity..."We don't have cheese for lasagna, or beef for stew, or any idea how to make matzah ball soup."  Sweet boy that he is, he offered to go into the world, in the icy rain, and bring back these things, and then all of a sudden I was like, "We have barbecue sauce in the freezer.  Let's have barbecue seitan sandwiches!"


A few points I want to introduce early... yes, this was pre-existing sauce, so I'm not going to show you an amazing sauce recipe today, we had just obtained five pounds of Ray's seitan, so there was never a question of what to put the sauce on, and finally, yes, I did send Sous Chef Brian out in the weather to procure rolls.  I wasn't putting the time in to make my own.


Sauce comes first, because seitan in pre-cooked.  If you're lucky, like me, your freezer is overflowing with sauces and such, but yeah, every once in a while we need to make a new batch.  If you're not 100% meat-averse, you can see how I made it last time here  - but yes, there are photos of raw meat there- and, yeah, I supplemented with some extra frozen sauce that time too.


If you're meat-averse, or just prefer to start fresh, here are the basics:  onion and garlic and tomatoes, diced and cooked down in plain tomato sauce with brown sugar and vinegar.  Add chipotle peppers for a can, or some chili powder, and maybe some cumin, black pepper and really, whatever makes you happy.  There are several very different schools of thought on barbecue sauce.  Texas sauce has less tomato, South Carolina or Georgia sauce is mustardy, Kansas City is more like ketchup in texture (but delicious) and then there are the vinegary sauces.   You have options in the world of sauces.  Go hoisin if that's how you're feeling.


Here's a mustard-based sauce, and here's a bourbon-y fruity one, if you're looking for recipes.


So have some warm sauce on hand.  I used a pound of seitan and a cup and a half of sauce.  I like sauce.  I had imagined we'd each eat about four ounces of seitan and have leftovers.


I started by draining the seitan and tearing up the larger pieces. 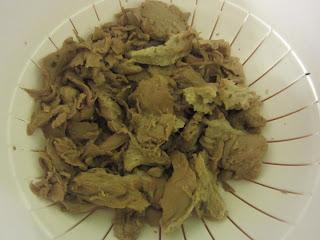 I patted it dry with a kitchen towel and got some oil hot in a saute pan.   While the oil was heating up, I massaged the seitan with a tablespoon each of cumin and smoked paprika.  If you're using a non-spicy sauce, this might be the time to go crazy with the cayenne or black pepper.  Seitan generally doesn't need salt, it comes salty enough. 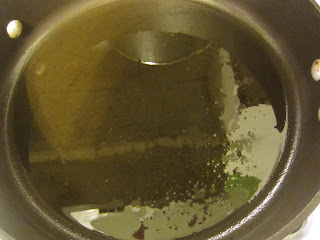 This may look like a lot of oil, but it's a tablespoon.  I like to get it hot, so it spreads easier, and then look back and decide if I need more.  I didn't need more.


I brought that to medium-high and added the wheat meat. 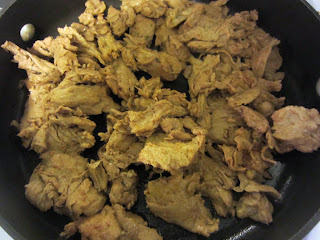 It was a tight squeeze, but each piece was able to come in contact with the oil, which was the goal.  Keeping on fairly high heat, I let it sit without moving for about four minutes, then flipped it around a bit. I'd say four minutes on each side, but it's not like this was cubes, so do your best.  Less than 20 minutes, probably more than 10. The goal was golden brown edges.

Once you've got some good crispy edges, just coat in sauce and simmer for a few minutes. Scrape the browned bits off the bottom of the pan. 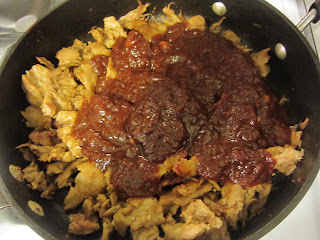 When the seitan is coated in sauce and everything's well integrated, 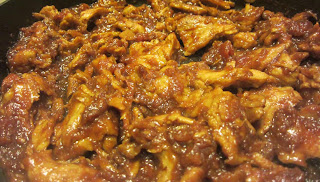 think about what to put on your sandwich.  I had a pretty spicy sauce, but I still had some pickled jalepenos I wanted to use, and some raw spinach.  Any lettuce or other green thing you eat raw would work here.  Onions, raw or cooked, would do nicely, as would pickles.

I served it with a pickle on the side and some collards I had braised.   I made the collards just like last time, except without bacon.  I started with a bit of olive oil instead. 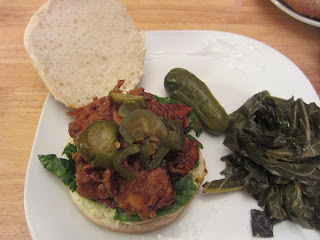 These were huge rolls and a quarter pound of seitan is a lot of faux meat.  I survived dinner the first time, but when leftover day rolled around I couldn't finish my sandwich.  Let's not have eyes bigger than our tummies, and just say this makes 5 servings.  Six even, if you have a side of collards.

If I were making my own rolls for this, I'd either make light brioche-style rolls or maybe go all out and make cheddar biscuits (second link not for people who prefer not to look at meat).