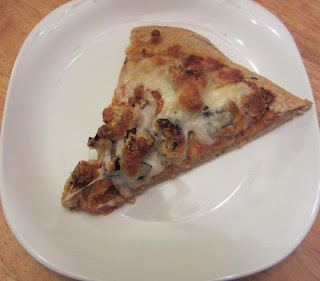 Typically on weeknights, I will either see Sous Chef Brian for a moment between work and his class, or speak to him on the phone for a minute.   I've said before, I'd almost rather not have that moment, because there's a whole lot of, "I paid that bill," "Did you call the vet," "Don't forget it's trash night," "Have you seen my good pants?" being fired off in both directions, and there just isn't enough time.  So, to add stress to that conversation, I'll often ask him what he wants for dinner.

Worse than that, I'll ask him if he's "had a chance to think about dinner," and the answer is always, "no."  Of course not. Who would?  He's looking for his good pants, and I'm digging my heels in and making it clear that class or not, trash night is his problem.  So I asked the other day and he said, "Is lasagna out of the question?"


I don't know why lasagna has such a bad rap.  Really, if you already have sauce made, and like me, you don't boil your noodles, lasagna takes 15 minutes to prepare your veg, 5 minutes to layer, and then it's all oven time.  Lasagna is not such a time suck.  But it has that feel to it.  "I made a lasagna," is often received with oohs and aahs.  Really folks, it's pasta with veg, but you made it in the oven.


Anyhow.  He actually said, "Is lasagna out of the question, and do we have eggplant?"  These aren't words that are commonly linked in our home.  I've never made or eaten lasagna with eggplant.  But OMG did eggplant lasagna sound good.  And I have a freezer full of diced eggplant.  This was going to be spectacular.  On a weeknight, no less.


I got my eggplant defrosting, realized I had no sauce so started making my quick-ish winter sauce, and turned on some music from my youth.  It was on.  On a weeknight.


Then I opened the cabinet and saw that I had four (4) lasagna noodles.  It was pretty obvious, I keep them in a big glass jar.  Lasagna was out of the question.*


The pizza place by my office puts anything on pizza.  It's amazing to me that I can point at a slice and say, "What's that?" and they'll say, "Ranch" all matter-of-fact and slightly irked that I can't recognize the white sauce, and I'll be like, "Ranch and what?" And they'll just say, "Fried chicken."  Oh yeah, that goes on pizza.  Sorry I didn't recognize that traditional classic.  These are the same folks that make cheeseburger pizza, taco pizza, and french fry pizza.  One thing I've seen, but not had, is eggplant parmesan pizza.  I had a pizza dough in the freezer.  Luckily, it was Sous Chef Brian's late class, and I had defrost time.


Eggplant is a wet thing, and I had these frozen cubes, so after they defrosted I wrung them out with a towel.   If you're starting from fresh, I'd suggest lightly salting and draining them, like tomatoes. 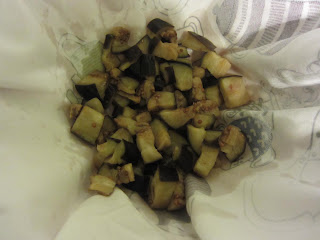 I had a little more than a cup and a half of skin-on eggplant cubes. 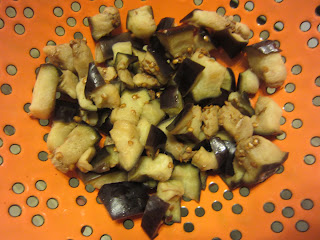 I made up some seasoned breadcrumbs.  Maybe a cup and a half of panko (this was too much for my eggplant), plus a tbsp each of oregano and basil, a teaspoon each of garlic, onion and red pepper flakes, and a pinch of salt. 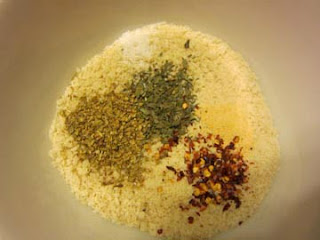 And I whisked up an egg. 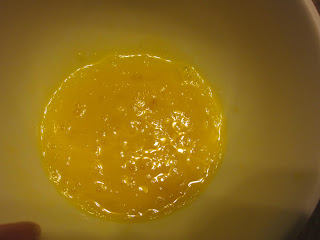 And drew up a blueprint and planned to dirty every dish in the house. 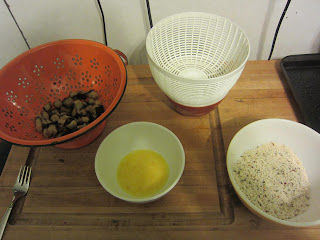 I swished all the eggplant around in the egg, and then set it to drain over another bowl. 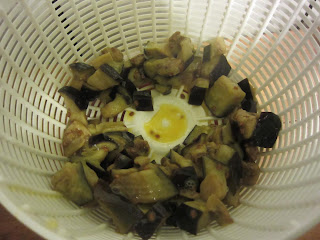 After several good shakes, I threw the eggplant into the breadcrumbs in small handfuls, separating them with my fingers as I tossed them to coat.


I didn't have a silicone mat handy, so I spritzed my baking sheet with oil and laid out the breaded eggplant. 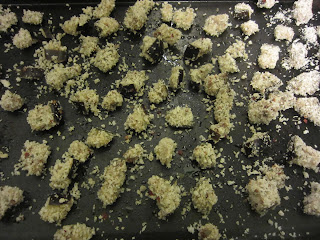 And then spritzed again.   15 minutes at 400, giving them a good shuffle and toss midway.

Until they were golden in spots and crispy. 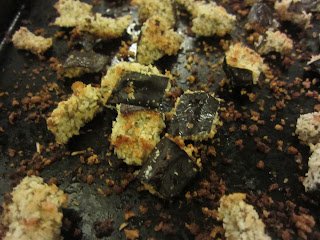 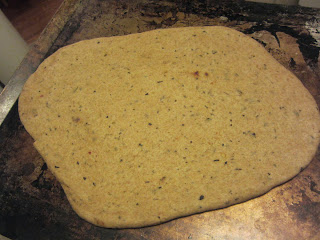 Top with sauce, then parmesan, then eggplant. 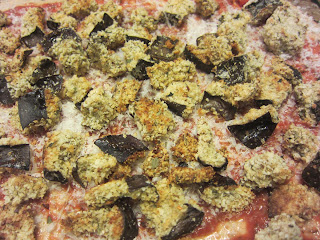 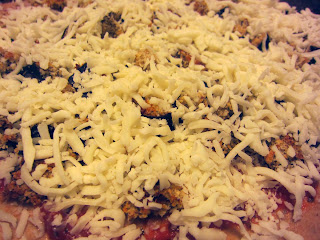 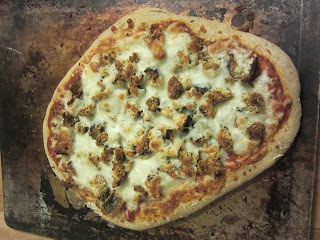 Slicing it was risky, because all that cheese was on top of big chunks of eggplant, so there was some movement of cheese, but it was awesome.   Eggplant parm, on top of pizza.  What's not to love? 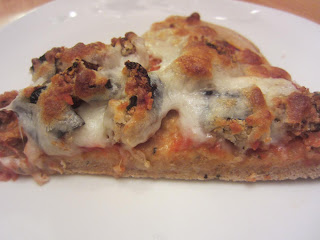 As a pizza-for-breakfast connoisseur, I should tell you that this was not awesome cold after a night in the fridge.  The eggplant was gummy.


*a reasonable person might say, "Go buy lasagna noodles," but several weeks ago I quit grocery shopping.  Remember when the fridge went out?  It's been since then.  It's fine.  I defrost things.  But there's less to show you.  I'll probably go shopping again someday, but for now, it's been fairly freeing.
Posted by Rose