I sort of can't believe this has been going on this long. 200 posts.  I'm not going to re-hash all that I explained on our 100th post-iversary but this wasn't something I thought out.  I started taking pictures of my dinners on a whim, at the suggestion of a friend.


Keep reading to enter to win a thing.


So since this thing started in January, I've posted 83 recipes, and I've posted pictures of my groceries 30 or so times.  It's been kind of a fun almost-year to document, because it wasn't the first year we decided to cook at home more and eat more veg and less meat, but it was the year we started getting good at it.  In the last ten months I've posted 102 vegetarian dishes, 44 of which were vegan.  That's pretty new around here.  Sous Chef Brian still worries that he'll be hungry if he eats something without meat or cheese, but then doesn't notice that it's missing until I remind him.  Besides, we have five pounds of seitan in the freezer, he'd better get used to it.


I've been slowly adding printable recipes to past posts, but that'll take some time.  Also, made a few tweaks to the general appearance and navigation of the site, so if you haven't clicked through in a while, take a look and let me know what you think.  Many of the changes I made were on the advice of a reader who spoke up, so, you know, you could be that reader.


And you've been sitting there, reading this all along.  Thanks! Do you have nothing better to do with your time?  I've told you before, there are plenty of other good blogs out there.


Sous Chef Brian will be in with a guest post pretty soon.  He did it around 100 posts and now thinks it's the thing to do.  But he keeps threatening to post another Mexican Hot Dog, or meatloaf.   We'll see how that goes.  I'm about to leave him on his own for a few days, because I'll be on another conference room carpeting photo shoot, and I'll spend part of that time worried that he's just eating cereal.

In the meantime, let's win a thing, shall we?


I try to cook - or at least write about cooking - in a way that doesn't require fancy tools.  I don't have a food processor, nor do I expect you to have one.  When I use my elegant stick blender, I tell you that you can do this in your regular blender, because you totally can.  But there are a few things that I can't get by without in the kitchen.  And I want you to have them. 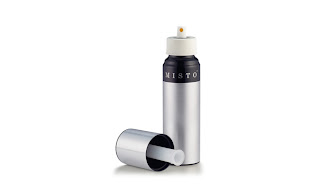 I already wrote an ode to my olive oil spritzer.  Seriously, how else do you get just a smidge of oil onto your food without resorting to PAM?  It's important, for kale chips, baked egg rolls, dumplings, calzones, and just about everything else.  I like it enough that I want you to have one.

I also can't get by without silicone baking mats.  I used to grease pans.  I used to use a lot of parchment.  Not anymore.  I use both fancy and cheap silicone mats underneath nearly everything I put in the oven, and I never have to scrub a baking sheet.  Never.   And I very rarely need to grease a pan, because everything slides right off.  I put them underneath pizzas and falafel and fish and biscuits and everything else.


I wrote above about our movement towards eating foods made of food (that's sort of my thing) as well as the more veg than other foods policy, but that doesn't mean less than ideal choices don't slip in now and again. I was heavily mocked in Saturday's Mouse HQ this weekend for putting potato chips on my sandwich.  I'm a believer in chips on sandwiches, and Sous Chef Brian thinks it's pretty gross.


Along those lines, there are two ways to enter the Freebie/Contest/Giveaway and get your own oil spritzer and silicone mat.


You can enter each way one time.


The first way:
Comment on this post and let me know what your chips-on-sandwiches is.  What do you eat that is unconventional or upsets those around you?  (Chips on sandwiches is not that unconventional, but it bothers my spouse).   Are you weird with food?  What does weird mean to you?  Game meat? Nutritional yeast on popcorn? What's your thing?


The second way:
Sell your soul on the Internet for me.
Go on The Twitter and tweet: I'm entering the @saturdaysmouse kitchen goodies freebie/contest/giveaway at Saturdaysmouse.com
Retweets don't count, but cutting and pasting does.


The winner will be randomly selected from everyone who comments about their weird foods and everyone who tweets the line above.


Commenting or tweeting, entries need to be in by a week from today - that's Monday, December 5th, midnight Eastern.


*color, brand and style will be determined at my convenience.


Random.org will do the actual math to pick our winner.


No one is paying me to do this. If I like a thing, I talk about it, and if I give you something that's 'cause I bought it for you.
Posted by Rose