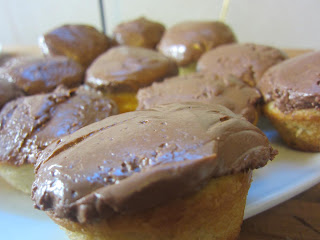 It's been a while since I've posted a fail.  I think of that as a personal accomplishment, because it's not like I'm hiding kitchen drama over here and not telling you about it.  Basically, if I make something I haven't made before, you're going to hear about it, success or not.   But this frosting, whoa... this frosting.

Sous Chef Brian is Very Old.  I'm not being mean, he'd tell you that himself. Ok, in terms of how old other things in the world are, like say, New Jersey, or the Smithsonian, he's not so old, but he's a bit of a freaker-outer about his age.  And he just got older this month.   So, to celebrate, I made cupcakes.


He doesn't even try to protect my feelings anymore, about the baking and all.  I say things like, "Do you want me to make you a cake for your birthday?" and he says things like, "No."


So this year I actually followed up with, "Would you like me to *buy* you a cake for your birthday?" And he said, "No, a store-bought cake might not be good either."  Hmph.  Yes, it's possible you won't enjoy a store-bought cake, but could it possibly compete with whatever horror I would come up with?


Last year, I made him a cake and it was good.  Lopsided, but good.  And I made buttercream icing which was also good.  But a week later I tried to do something very similar and it was bad.  Very, very bad.  Then six months ago I made a cake for someone else, and I made successful icing (cake was still wonky).


Finally, we agreed on cupcakes (probably because it's less heartbreaking to toss out individual cupcakes than a whole frosted cake).


I made this cake from Smitten Kitchen, but if course, messed with it a bit.  I added applesauce, more vanilla, less butter, less sugar and used regular AP flour.  But followed that basic recipe.  And it was good.  Very moist.


Then I made frosting.  Cocoa, sugar, butter, Kitchenaid, done, right? 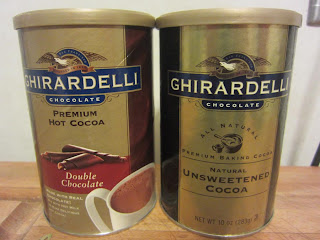 
As I spread the thick mixture onto the cupcakes, I was surprised at the helmet-shape the frosting took on. 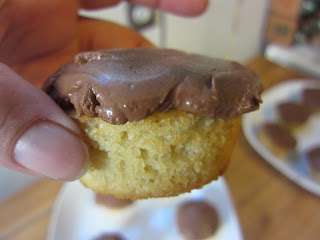 I tasted it, and thought, "that tastes like some Little Debbie crap," but pressed on.  I don't really like frosting anyway, who am I to judge?


MSNDG took one and locked eyes with me, her mouth full of frosting and her eyes full of panic.


The frosting had the texture of peanut butter, but somewhat dustier.  So, it was like coating your mouth with spackle.


Bummer, because those were some good cupcakes.   And that was a waste of hot cocoa.


I have another year to perfect my recipe.

For those of you looking to win a thing, this is post #199.  We'll do details next time.
Posted by Rose