It's getting to be the end of soup season.  A hot bowl of soup is so comforting right when the weather starts to get chilly and then through the winter, but as soon as there's a hint of a warm day here or there, soups can start to seem so heavy, so warm... still appropriate for a rainy day, but burdensome when the sun is shining.
But April showers, right?  We still have a couple more weeks.  Pretty soon we'll be trading leeks for scallions - until then, we have potato leek soup.
This is a very straightforward soup, with a short ingredient list.  Leeks, potatoes, stock, salt, white pepper (red if it's what you have), and olive oil.  And a blender.   I've done this with a friend's immersion blender, which works spectacularly, or in batches in my own blender.
To make a stockpile of soup, use two leeks and six russet potatoes.
To serve 4-6, use three potatoes and one leek. 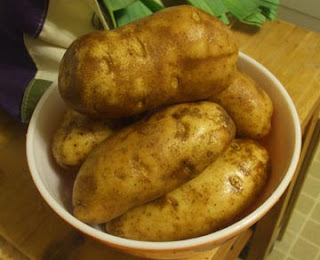 Start by cooking the potatoes.   I scrubbed them, then scored the equator of the potato and then dropped it in boiling water until tender.   Once tender, I used tongs to remove the potato to a large bowl of cold water.  After they've cooled a bit, you can peel them with your hands. 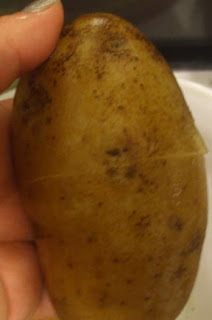 Peel and cut into manageable chunks. 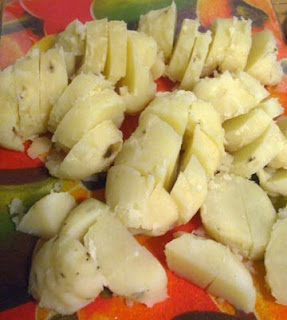 Coarsely chop the leek(s).  Remember everything will be blended in the end.  Add two tablespoons of oil to a soup pot (one tablespoon for one leek, two for two) and set to medium.  Add the leek(s) and cook until they smell great. 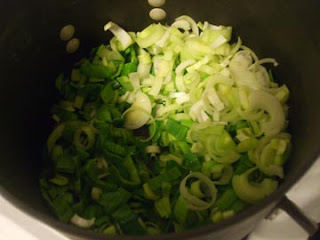 Add vegetable stock.  Mine is frozen in cubes (the color reflects the amount of red cabbage in the stock this time).  I think this is about three cups, but really, you want enough stock to cover your leeks and potatoes.  I like my soup fairly thick, but the amount of liquid you add is very flexible - less liquid, thicker soup. 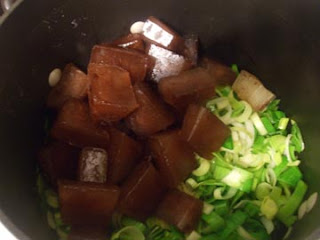 Add the potatoes to the leek(s) and stock with white pepper and salt - one tablespoon of white pepper per leek, and 3/4 teaspoon of salt per leek.  Simmer 10 minutes or so. 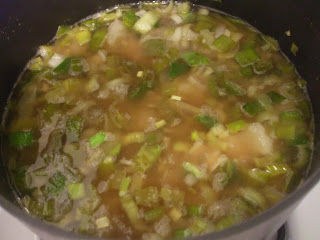 Blend the soup - either in batches in the blender or with an immersion blender, until you get a smooth puree. 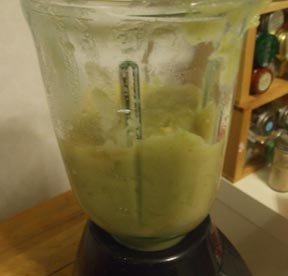 Serve the soup hot, with maybe a few croutons or a sprinkle of red pepper flake (not pictured). 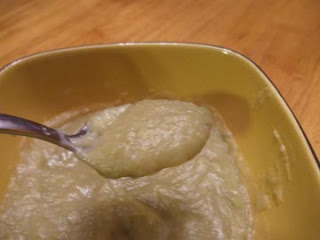 Do you eat soup year round?  Which soups hold up to the change of seasons? Tell me about it in the comments.
This recipe is cross-posted at the blog for the South Philly Food Co-op, whose mission is to open a member-owned cooperative grocery store that provides affordable and nutritious food to all residents of South Philadelphia while empowering the local community through sustainable practices, food-centric education, outreach, and community building.