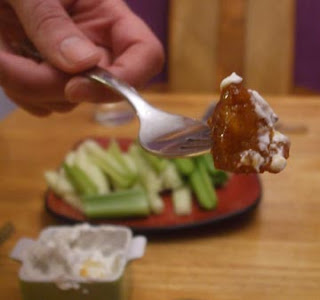 I heart seitan.   I can't make that clear enough.   I like tofu, and there are applications that are appropriate for tempeh, but seitan can be anything, the texture is fantastic - overall, it's incredible.   I'm also not chicken-wing oriented.  I don't want to pick anything apart like that.  But I love buffalo sauce (ok, I just love hot sauce).  So I've been looking for a non-meat alternative.
Several weeks ago (months?) I got buffalo tempeh in a restaurant and was really disappointed.  It was lumpy and tough, like tempeh can get, and coated in a decent sauce, but unpleasant to eat.  It was just a week later that I went to Cantina Los Caballitos - a restaurant that we and lots of other folks we know have sort of a love-hate thing going on with - and saw vegan buffalo wings on the menu.   I asked the waiter what they were made of, and he said, "it's not meat."
Sure.  What's in your milkshake? "It's not meat."  I tried harder.  He said it was soy and I was disappointed.  Two joints in our neighborhood serving buffalo soy products, what a bummer.  I had picked a second-choice meal off the menu and when he came back to take our order, he told us it was actually seitan.  YAY!  Seitan!  And it was absolutely as good as I had hoped.  It was crispy and spicy and if you got a meat-only kind of person a little drunk, he'd totally believe this was chicken.   Sous Chef Brian and I worked together to take that plate down, neglecting his enchiladas entirely.
On the walk home, I said, "I bet I could make that."  And time passed and I didn't.  So then a couple of weeks ago, we're doing menu planning before I go shopping and he says, "Buffalo seitan."  And I nod and buy seitan and Earth Balance and forget about it.   And then last night it happened.
This is a no-big-deal meal.  This is a quick and slightly dirty dinner.  Sometimes I make dinner (think falafel) and I'm in the kitchen for 3 hours on and off.  This was not the case.  30 minutes from "we should have the seitan" to "that was great."

It's not, of course, a "diet" meal.  Fried seitan, coated in a margarine-based sauce, and dipped in creamy sauce.   We cut corners to make it a tad lighter here and there, but still, know what you're getting into.   Make this for a sporting event or as an appetizer at a party.   We will.
Let's get to it, shall we?  Here's the thing.   I almost didn't post the step-by-step for the first part, because we've totally done it before.   Bread and fry some seitan like you're making the Sweet and Sour Seitan. Ok, like this.
Start with some seitan.  I keep promising myself I'll make it from scratch next time.  I'll make it from scratch next time. 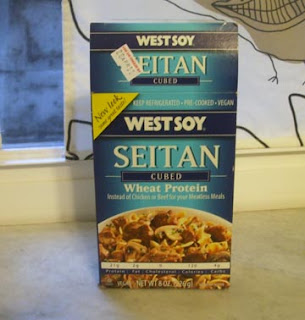 Drain off any excess liquid - I want it all to be damp, but no pooling liquid.
And cover it in 1/4 cup cornstarch - shake in a bit of cayenne, onion and paprika here.    Coat the seitan in the powder. 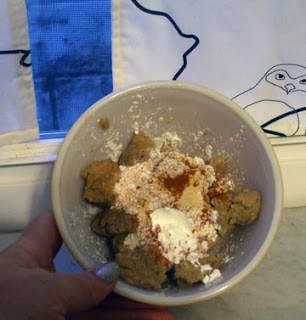 And throw it in some hot oil.  I was cognizant of what was to come, what with the margarine and all, so last time I did this I used 1/4 cup of oil, and this time I used 2 tablespoons (the equivalent of 1/8 cup).  It worked just fine.   So skimp on the oil.  I tossed the seitan around in the pan.  Seitan is pre-cooked, so my only interest here is to crispy and brown the outside. 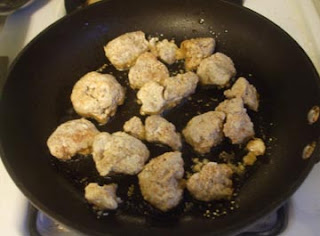 While that's going on, get the buffalo sauce started.  As far as I know, and I did zero research into this, buffalo sauce is half margarine (or butter) and half hot sauce.  After last night, I'd suggest shifting the ratio towards hot sauce a bit.  The seitan could have been hotter.    I put 1/3 cup margarine and 1/3 cup Cholula into a pan and melted them together.  You could use a more old-timey hot sauce for a more authentic taste.   Use Frank's Red Hot or something.  Not Tabasco.

It didn't take long to melt them into an orangey sauce.  This was 2/3 cup sauce, and way too much.  I froze half of it.  So you could start with much less. 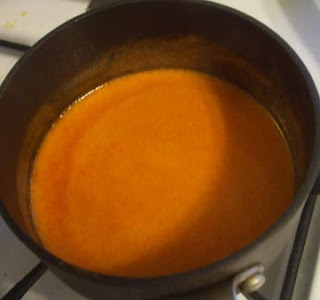 Simmer the hot sauce and take your golden brown seitan out to drain on a paper towel or cloth. 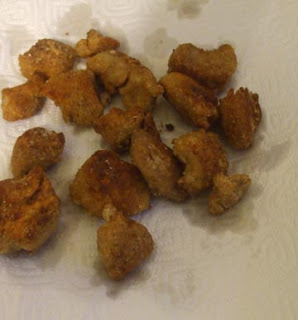 Dump any excess oil out of the pan, wipe it with a cloth, and put the chicken back in with enough buffalo sauce to coat.   Flip it around a bit, keep it warm while you cut up some celery and cucumber, or whatever. 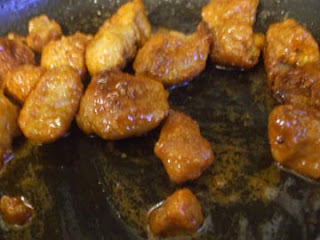 And there it is.  You could throw it in a salad or on a wrap or just eat it with some veggies and maybe a dipping sauce.  I put together a "sauce" of veganaise (it's what I keep in the house) and gorgonzola, but you could make something vegan to go with this too - I'm just not going to mess around with fake blue cheese.
8 ounces of seitan is 2.5 servings.  We had it with a cut up cucumber and a half a bunch of celery, and there were no leftovers.