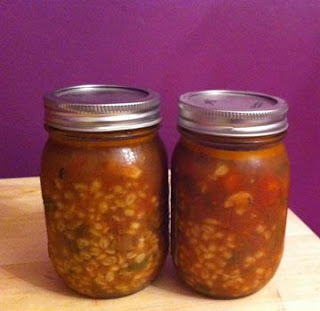 I'm the sort of person who makes food for people.  If you come over, I might open the freezer and suggest you take something.  "I made too much pasta sauce/pita bread/garlic scape pesto - why don't you take some home with you?" I'm like your Jewish or Italian grandmother, only much younger.  And I don't want you to eat it all now, just fill your pockets with it for later
My mother does this with groceries, so I have to imagine that's where I get it.  I still have a can of pineapple that she handed to me without explanation a few years ago, several boxes of cake mix, and I've just received a jar of banana-peanut butter.
If you live far, and something good or bad is happening in your life, I'll send food. If you live close and have something going on, I'll make food and bring it over.   For years, I've sort of had this joke about it, if there's someone who is sort of adorably pathetic - typically the younger hipsters - I say, "I want to make him soup."
Several weeks ago, I spoke to a friend about how she was dealing with her chronic illness and offered to make her soup.  Not that she's unable to eat a hamburger, or unable to cook her own soup, but you know, I could make her soup.  She seemed insulted and accepted no soup.
Fine then.   Maybe some people don't like to be described as adorably pathetic.  But I don't learn.  So another friend has been eating hospital food for several weeks now, and so I told him I'd bring soup, and that I make potato leek and chicken tortilla and such - was there anything particular he was interested in? "Beef barley."
Beef barley.
1.  I don't think I've ever had it.  It's just not something I'd choose.It's not the beef, per se, I like onion soup. I like beef stew.
2. I don't buy the sorts of things one makes beef stock out of.
Is it still considered making soup if you don't make the stock? I saw recipes for "quick" beef barley that included opening a can of stock, dropping in deli sliced roast beef and a few vegetables, and simmering 30 minutes.   Is that making soup?  Or is that adding some stuff to pre-existing soup?  Will it have the healing properties of homemade soup?
I didn't want to risk it, but I'm really not a "snout to tail" person.  I compromised.  Some existing stock, and some beef on the bone, and together we'd get something kind of made of food.
Vegetarians look away - raw meat after the jump.

I started with stew beef, which I cut up beyond the cubes to make bite-sized and a short rib, bone in.  I preheated to 400, and laid them out in a roasting pan. 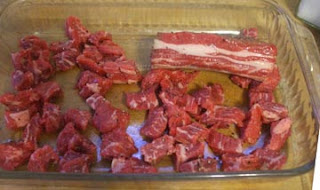 And salt and peppered them. 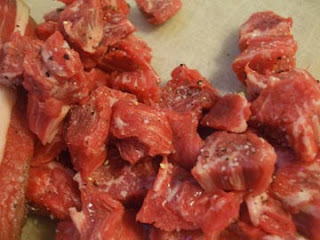 And put them in to roast until brown.  Meanwhile, I cut up veg.   Carrot, celery, onion, garlic. 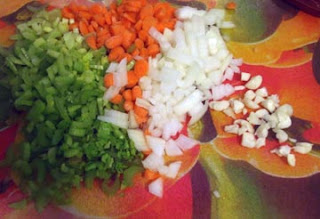 And got them going in some butter in my biggest pot. 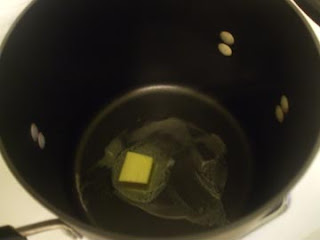 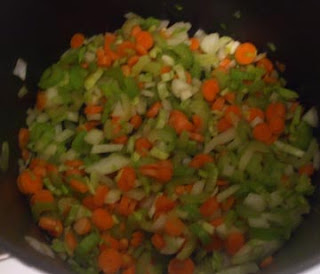 When the veg were tender and the meat was browned, I put the meat in. 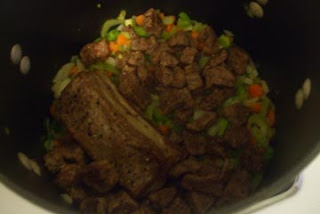 Along with a big can of diced tomatoes. 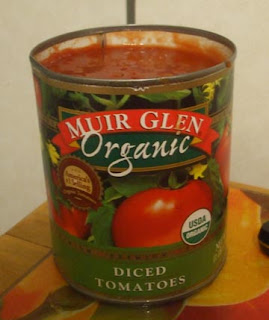 And I added five cups of beef stock.  Maybe mine had something to do with organic bullion added to veg stock.  Maybe you have something more legitimate to use. Then I let it simmer for two hours.   After that, I pulled out the rib and cut the meat off it and tossed that back in.   I cut up some parsley and pulled the leaves off some rosemary, and cut up some baby portabellos and put it all into the pot with a good sprinkling of black pepper (to taste, of course). 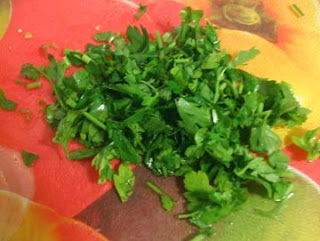 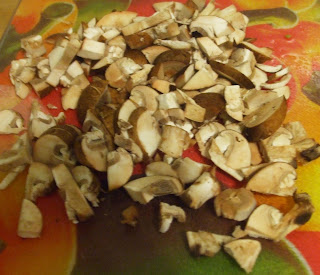 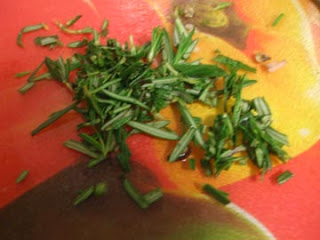 I let this all simmer together another hour. 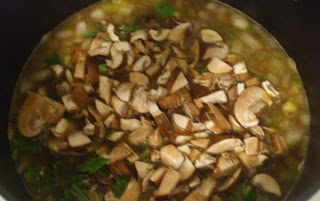 Once everything was tender and I was happy with the flavor of the soup, I added in the barley.  I started with about a cup and a half and sprinkled in a bit more - go for the consistency you want.   Let that cook together until the barley is fluffy, about 30 minutes.   Twice in that time, I floated a paper towel over the top to absorb some fat - this wasn't much of a concern, but I imagine that's all about how fatty your meat is.  Fat certainly rises to the top when it cools, so I imagine we'll skim that off each storage container as we defrost.
I don't have a photo of the bowls of soup - we weren't home when we ate them.  We got about 12-15 servings out of it (let's say 12 if you're not serving it with bread or crackers).
No recipe today - I mean, it's pretty self explanatory from the above, but I didn't measure anything but the stock, and that was just because I had to use a measuring cup to put it in.
Thoughts on soup?  Or food pushers?  Let's chat in the comments.
Posted by Rose