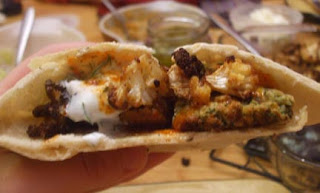 This is the third and final post in the series - really, this is all the other stuff we made to go with the falafel, stuffed inside a pita, the stuff that wasn't really about recipes and wasn't really photographed throughout.
Hummus
I think hummus recipes are silly.  As far as I'm concerned, hummus requires chickpeas, tahini, olive oil, salt and whatever else you want to put it - but I know even that is flexible.  People make hummus with other legumes, without tahini, etc.
I don't measure when I make hummus because while there might be some perfect ratio of chickpea to tahini, I'm always working to reduce the tahini, and I can't claim to have the numbers down right.  Besides, maybe you like tahini more than I do. 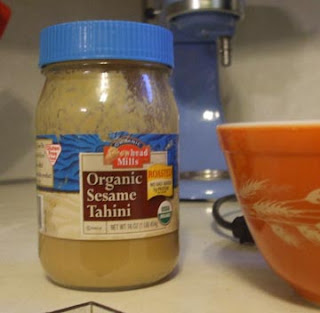 I feel like the struggle is to keep the tahnini quanity down so it doesn't taste too peanut buttery (sesame buttery).  I started with two and a half cups of canned, rinsed, drained chickpeas. 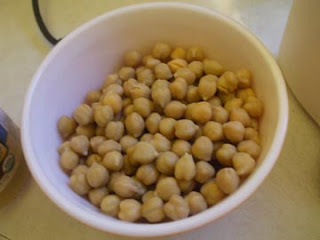 Of course, my "food processor" is small, so I did this in batches, which messes with the idea of measuring even more.  I really made hummus three times, and then mixed them together in a bowl.
Get the chickpeas in the processor and add a tablespoon of tahini and a teaspoon of olive oil. 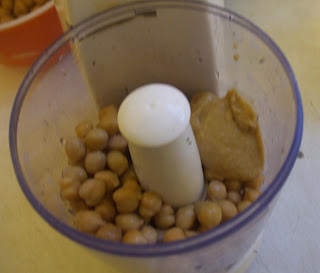 Pulse together and check the consistency.   Is it smooth?  If so, great, now add in garlic and salt.   If not, add in a bit more tahini.  Is it smooth but gummy?  Add in more olive oil.  Basically, get the mix to the texture you want, and season it up.  This is straight-up garlic hummus, so I added three cloves of garlic and a teaspoon of sea salt.   Our mystery dinner guest is more traditional (fancy?) so she made it all pretty with drizzled olive oil and paprika on top.   If I was just making this to pack up with lunches for Sous Chef Brian and me, maybe I'd skip the fancy touches at the end.  But look - fancy! 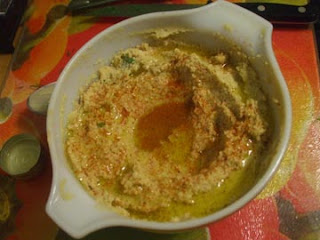 Roasted Cauliflower
Whenever I write that word, I first try "cauliflour" and then realize I'm wrong and step back and do it again.  Anyhow, if you asked me if I liked cauliflower a couple of years ago, I'd have said it was boring but passable.  Then I started mixing it into mashed potatoes and finally I figured out roasting.  I say "figured out" like I invented something no one had ever heard of, but yeah, changed everything about cauliflower in our house.  We eat roasted cauliflower like candy.  Seriously, there are nights when the cauliflower doesn't make it to the table, we get through it in the kitchen while we're doing other things.
I take a head of cauliflower and break it into bite size pieces.  I start with a knife, but mostly use my hands.   Then I put it in a bowl and drizzle it with olive oil.  Not a lot, but it depends on how much cauliflower you have so, again, no measurements here.  Enough to just coat. 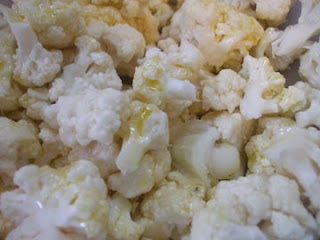 Then season it.   For everyday roasted cauliflower, I just add salt and pepper.  For a topping or side dish with falafel I added salt and pepper, cumin, paprika and a dash of cayenne - not aiming for "hot" but well-spiced.   Stir it together really well to cover everybody in spices. 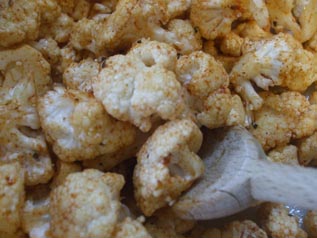 Lay it out in a baking sheet and roast. 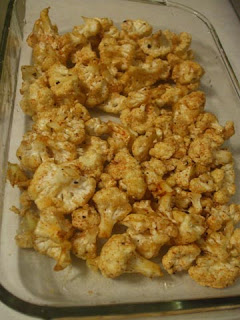 If I was just doing the cauliflower, I guess I'd set the oven to 400 and leave it in there about 30 minutes, stirring (shaking the pan, really) halfway, but usually I'm cooking other things at the same time so I get a little bit flexible with my oven temperatures.  I don't have a picture of just the cauliflower once it's done, but I have a "group shot" I'll post at the end.  I want it to get to be a rich brown, sort of nutty, and crisp around the edges but totally soft and creamy inside.
Cucumber Salad
Our mystery dinner guest's grandmother used to make something much like this, but with sliced, rather than diced, cucumbers.   This is diced cucumbers, apple cider vinegar, dill and a dash of sugar.   If this was the summer, we'd have added tomatoes as well. 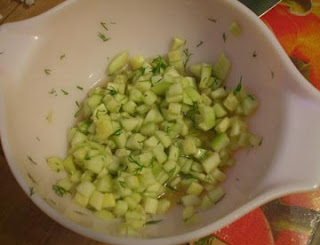 Yogurt Sauce
I like the combination of hot and cool on my falafel.  I'm certainly going to use hot sauce, but I want something creamy on top as well.  Yogurt sauce.  I thought I was going to make tzatziki sauce, but didn't want to bother with salting the cucumbers or straining the yogurt, so I just really added dill, salt and a bit of lemon juice to yogurt. 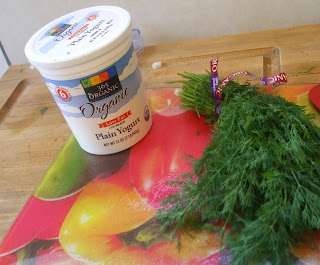 I don't have a photo of just the sauce, but it'll be in the bigger shot of the whole dinner.   I let the yogurt sauce sit in the fridge with a bowl helmet to meld for about an hour before serving.
This dinner was great for the stock bag.  Stems of parsley and cilantro and dill, all the green stuff off the cauliflower.  It looks like I need to make up some veggie stock this weekend. 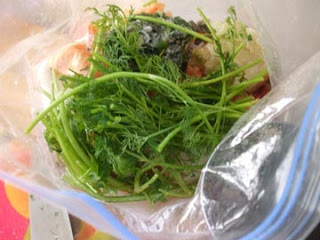 And this is everything, again.  Falafel, pita, roasted cauliflower, cucumber salad, yogurt sauce and hummus.  Skip the yogurt sauce, and it's vegan, so you know I'm tagging it that way.  Soy yogurt? 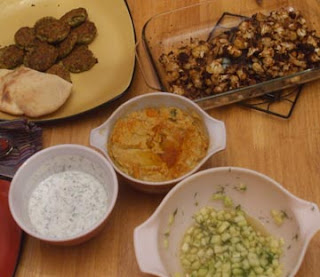 Have ideas for other foods you want stuffed into a pita with your falafel?  Need details on something I glossed over?  Suggestions for next Sunday's dinner?  Let me know in the comments.
Posted by Rose