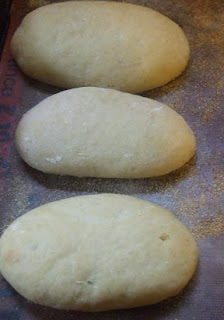 I'm pretty much set for bread.   I have pita in the freezer, along with two and a half loaves of the quinoa-flax bread, and some bread ends for croutons or breadcrumbs.  I'd like to totally avoid buying storebought breads.   But sometimes, you want to make something, maybe something quick, and there's this perfect bread for it and you don't have the 4-5 hours to pull it together.  Sandwich rolls are like this.  I don't want to eat a hamburger, or a sloppy joe on quinoa bread or on pita.   And I had big plans for Banh Mi.   So I needed to get some sandwich rolls going.

Here's the thing though - I have mild plague.  Is it just a throat tickle, or an actual thing?  I don't know, but I'm not about to go touching on all the foods.   I have to be pretty sick to want to forego chewing and switch to soup when I'm sick, so the Banh Mi stayed on the agenda, but who would make the bread?

Cue Sous Chef Brian.   In what I'm sure was a truly stressful feat, with me standing over his shoulder trying to convey the specific finger movements I use when kneading and shaping bread, my husband stepped in and took care of sandwich rolls.  My husband - the one I worry about when I leave on business trips, because he might not think to defrost something - the one who, when I had classes all day Saturdays, would tell me at 4 that he "didn't know what to eat," and thus had not.  He made the bread.

Start, like anything, with a packet of yeast, a quarter cup of body-temperature water and a tablespoon of honey in your mixing bowl.  Stir with a fork and do other things while it gets foamy.   When it's foamy it looks like this. 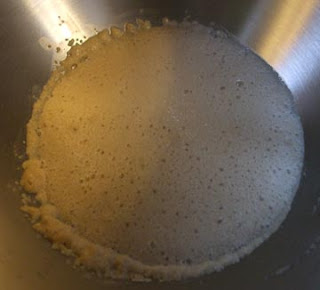 Add in another cup of water, warmish still, and 1/4 cup oil (olive, corn, whatever). 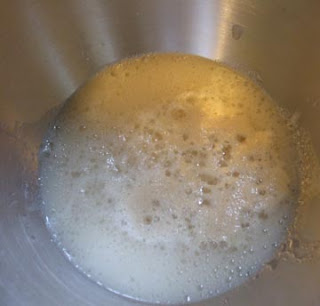 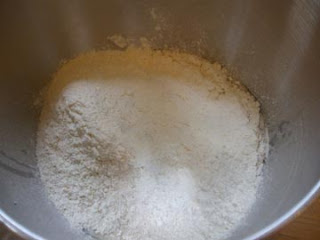 Knead in the mixer until it's one thing and pulling away from the bottom of the mixing bowl.  This is a balancing act, maybe add a tablespoon more flour or a bit more water, mix some more, make adjustments, etc.

When it's all one thing, flour your hands and shape into a ball.   Put the ball into a greased bowl and toss to coat.  Maybe there's a bit too much oil in this bowl. 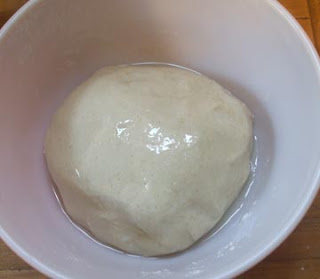 Cover and hide to rise.   It was cold and rainy and I was sickly, so we had the heat on, which means bread rises best in the basement by the boiler, but on another day I'd just stash it in the china cabinet.   Let it rise an hour or so, until doubled. 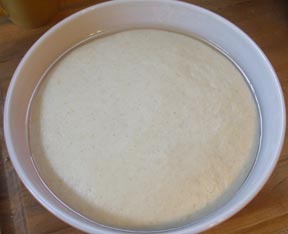 This is more than doubled.  Divide into eight pieces - don't go guessing what an eighth is, divide in half, then in half (into quarters) and then divide each quarter in half.

Shape into rolls.  Use some flour for the shaping - Sous Chef Brian is a pro at this and I'm not, but flour was the key to the pita bread puffing up, and he figured that one out.

Long for hoagie rolls, round for sandwich rolls, and if you want to go hot dog roll with this, divide the dough again (16ths) and make narrow snakes.   We did a range of sizes and shapes, based mostly on not caring and also on not knowing quite what they'd all be used for. 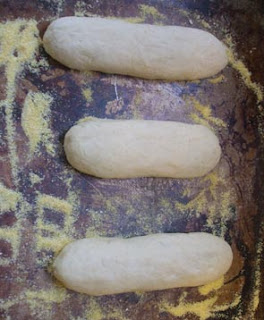 These are hoagie-ish, but there were others.  I took inconsistent photos of the process.   Lay the shaped rolls on a baking sheet dusted with cornmeal.

HOT TIP:  Don't put cornmeal on a rimless baking sheet.  Because when it slides off the sheet into your hot oven, it will create a lot of smoke and you don't want that nasty flavor getting into your rolls.  So you'll have to pull the rolls out in a frenzy mid-bake and clean it off the oven and put them back in and hope for the best, and who needs all that stress?

Ok, so once they're shaped and on baking sheets (I did four rolls per sheet, despite what this looks like), cover and let rise again, about half an hour.   Meanwhile, preheat to 400.   After the second rise, they may look like this:

So our done rolls look a lot like our raw rolls, but I wasn't going to trade softness for a golden brown exterior, and I don't believe in egg washes unless I'm trying to make food look fancy for company.

These are pale, sure, but they're incredibly flexible - freeze well and go with anything.  They're soft, with a slightly crispy crust on the outside. 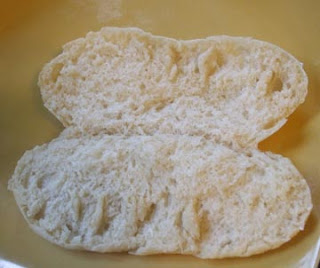 Cut them open and fill with samich goodies.

Again, I tag breads vegan as long as they don't include egg or dairy, because you can swap the honey for something else.  Sugar even.

Of course, you could add herbs and such to these and make them stand-alone delicious - but I needed them to meet a range of samich needs.

Do you have requisite breads that are always in the house?  Or meals that you won't make (or eat) without the appropriate bread?  Tell me about it in the comments.

Instructions
Put the yeast, honey and 1/4 cup warmish water in the mixing bowl and let proof. When bubbly and fluffy, add the rest - oil, water, flour, salt and set to mix (you can do this by hand too). Adjust flour and water as needed. When it's all one thing, form into a ball.

Put the ball in an oiled bowl and toss to coat. Cover and let rise until doubled, about an hour.Divide into 8 pieces and shape into rolls. Dust baking sheets with cornmeal and set rolls on sheets, covered, to rise another half hour. Preheat oven to 400.Bake at 400, turning and swapping sheets once, for 15-20 minutes, or until internal temp is 190-200 and tops feel crispy.