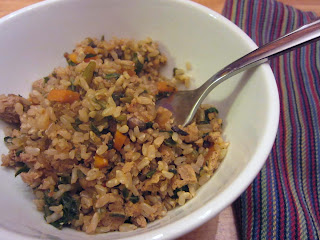 So the other day we had those bok choy and tofu wontons, and I made too much filling.   Today it's same dinner, different day.


I've mentioned before that I'm pretty much not going to heat up yesterday's dinner for tonight's.  I'm going to make something else.  I'm not anti-leftover; I cook more than we can eat most meals so that we have lunches and freezer food.  But freezer food is for later.  Later, I can eat the enchiladasagna in the freezer.   Not the same week that I make it.

But while I don't want to have leftovers for dinner, I'm perfectly happy to have same dinner different day.  That's different.

So wonton filling went into a hot wok with some oil.  Ok, I'm lying, it wasn't the wok, but it was a wok-ish pan. 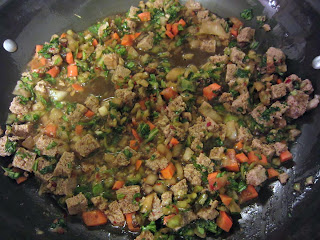 And I dumped in some cooked brown rice.  And by cooked, I mean frozen rice, defrosted. 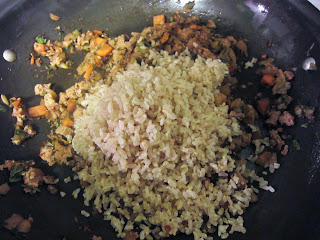 The wonton filling was already marinated, so I didn't do anything in terms of sauce or flavor.  I just added heat.  It took literally* five minutes. 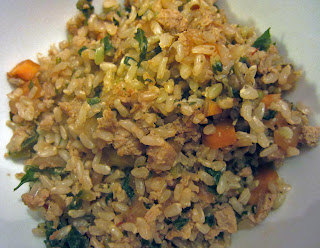 Sous Chef Brian had taken the remaining wontons for lunch the day before, so this meant that four dinners and two lunches used up the filling (plus some rice).


*in the voice of Rob Lowe