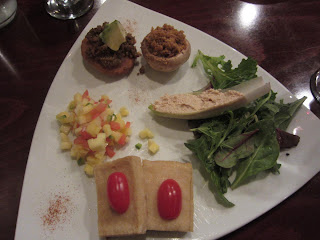 Have you been to Mi Lah Vegetarian?  It had been a while since I had been there, and now it's all vegan.  This was perfect, because my vegetarian and dairy-free friend - who I call vegan, because it's easier - was in town and we were looking for some dinner.


We started with the appetizer sampler above- described as: Yucca Root Tart Stuffed with Seitan; Crispy Tofu over Edamame; Endive Salad; and White Mushroom Stuffed with Picked Radish.  The yucca tart was great, but we weren't immediately wowed by the crispy tofu or the stuffed mushroom, and the endive salad had a flavor we couldn't describe as anything other than fishy.  So it was kind of awesome that we started there, because the entrees were such an amazing surprise.


We also got an unphotographed appetizer: Seared African Sweet Potato Patties with Cabbage and Crushed Peanuts Salad.  It was good: creamy and crispy with rich, earthy flavors.


But then the entrees came.


Let's start with the star.  I won dinner. 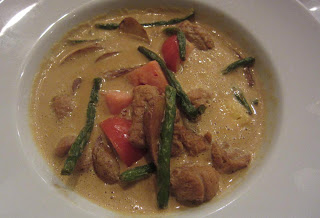 Thai Yellow Curry with Seitan, Pineapple, Fingerling Potato, Tomatoes, and Green Beans.  You know I love seitan, so that didn't hurt. This was an outstanding dish.   Bright and aromatic, creamy and rich.  Sadly, it was so good that I was compelled to share it with Sous Chef Brian and our half-vegan friend.  It's ok though, there was plenty of food.

It came with this fried flatbread. 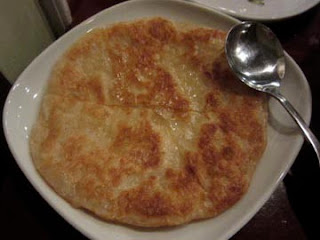 Which was delicious in the way that greasy fried flatbreads can be. 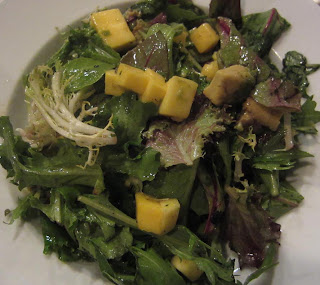 I am anti-mango. I think mangoes taste like soap.  I have to think it's like how those anti-cilantro people taste my favorite herb.   So I have no opinion on the salad.


The half-vegan (pick a new nickname or I'll keep calling you that) got the Brazilian Seitan Feijoada with Pan Seared Red Curry Polenta Cake and Braised Kale.  It was an interesting mix of flavors. We all loved the polenta.   The kale was just kale, and the seitan was slightly sweet but kind of meaty.  Each component worked. 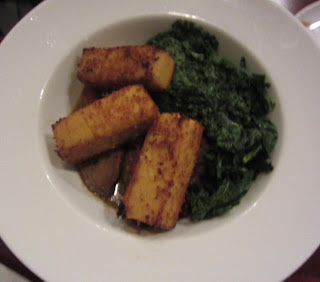 Sous Chef Brian got the Pan Seared Seitan Zucchini Patties with Steamed Vegetables and Mashed Potatoes.  We couldn't believe how buttery the vegan sauce was.  Seriously, it was like hollandaise.  The patties were delicious, but super-filling, and after two appetizers we had to start prioritizing, putting only our favorite foods into our faces. 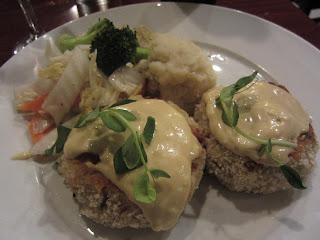 Of course that meant we all dipped our forks into the seitan curry dish.


Note:  I am not a restaurant reviewer.  I will not post horrible restaurant experiences here.  I will post weird ones, if they're weird enough, and good ones, but mostly I'm posting about restaurants because I'm not cooking, and if I were cooking, I'd be posting about that.
Posted by Rose