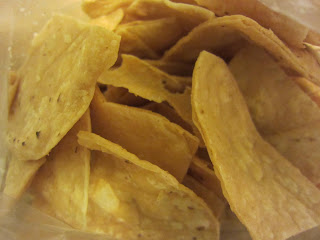 This one's for the locals.

Luckily, there are folks around here willing to make these things for me, and I am happy to buy these things from them. Another thing I'm just not going to do on my own: tortillas.  I don't have a press and it's just not at the top of my to-do list.  Just another post-lottery-win activity to go on the list.

Months ago I got excited because a local corner store was carrying tortillas made in the suburbs nearby, and that was great, but I was forgetting that very fresh local tortillas were just a few blocks north.

A friend and former colleague turned me on to the tortillas at Tortilleria San Roman a few years ago.  It's in the Italian Market and I don't get out there as often as I should for as close at it is.

Last weekend my parents were in town and we decided to drag them all over town, shopping.  I had two goals at the market - spices and tortillas.  I couldn't find the smoked salt I wanted in either of the spice stores, but the tortillas were just a couple blocks away. After spending more than I intended on things I truly did not need at Fante's (at the time, it felt like I *needed* pear extract), we headed over.

I walked into Tortilleria San Roman and all of a sudden things were happening fast.  People were furiously making tortillas in full view and a nice guy was pushing samples.  "Nice" and "pushing" may not fit together but that's what was going on.   I took a tortilla, doused it in salsa and shoved it into my face.  Yes, that's what I was after. 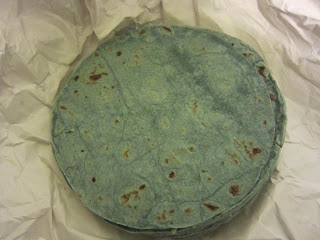 The chips were in bags on the counter ready to go, and the tortillas were available by the kilo.  I don't measure things in kilos, I don't know what a kilo is, it's something I only hear on TV, so I thought whoa, a kilo is a lot of tortillas, and yet I ordered a kilo for $2.

Ok, so a kilo would probably be a heck of a lot of any kind of powder sold in little baggies, but it's a fine amount of blue corn tortillas.  I gave a handful to my parents, and then used tortillas twice for dinner and *then* took this picture of the stack, so there were more, originally. I'm under the impression from their Facebook page that the blue ones are a weekend-only special. 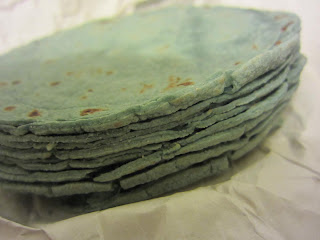 The tortillas were still warm when I got them home, making me feel terrible about stashing them in my fridge. We've used them twice now, for tacos and for quesadillas, and they're fantastic.  Sturdy enough that you don't need to double wrap your taco. 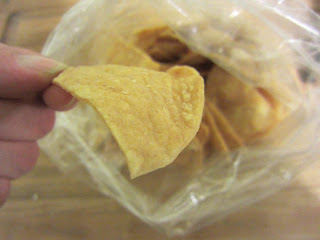 I believe I paid $3 for the huge bag of warm chips.  They're not thin, delicate chips, they're crunchy, hearty, flavorful chips.  They're nacho pros, because they stand up to whatever you top them with (and you know I put lots of stuff on nachos). 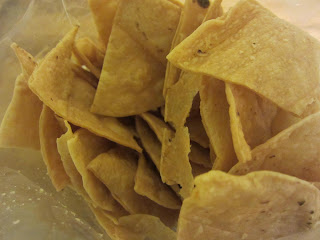