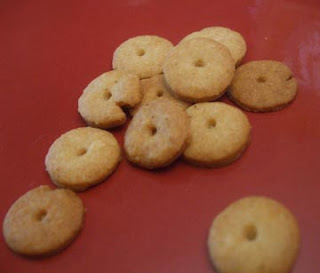 OMG.
When I first saw the goldfish crackers recipe on Smitten Kitchen, I was like, "Yeah lady, that's great, but the rest of us have day jobs."  I mean really, who is going to sit around cutting out tiny crackers like this?  And I'm certainly not going to order a goldfish shaped cookie cutter to make it happen.  And then I read the cheddar cracker recipe at Home Cooking in Montana and read The Kitchn's recreation of it, and I started thinking I could do this.  Maybe it wasn't some precious ridiculous thing to make tiny delightful crackers.  And really, if they're that delightful...

I'm not one to use a recipe verbatim, and if I'm going to eat a storebought goldfish cracker, I'm going to eat a flavor-blasted Goldfish cracker, with extra chemical flavor.   But let's not eat those things.  Let's do it ourselves.  I followed the basics of the Smitten Kitchen recipe, but I wanted to make sure this had the sort of flavor that really pops.  She made the recipe for her kid...I wanted a grown-up amount of flavor.  I decided to add the spices I add to mac and cheese - the onion, as specified in the recipe, and a good bit of both paprika and cayenne.   Not quite spicy, but very much spiced.
The Smitten Kitchen recipe relies on a food processor.  I've mentioned before that my lil mini food chopper can serve as one, but it means doing everything in batches.   I wasn't going to deal with that, I was going to bust out the Kitchenaid.  I had read somewhere that you can use the whisk attachment to cut butter into pie crust.  I don't make pies, so that's not so much my thing, but I figured it'd work just fine.
We're getting ahead of ourselves.  Let's make some crackers.
I got this fresh Hillacres Pride butter at the farm market last week. 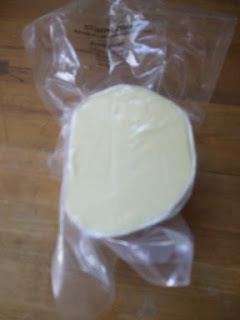 I typically buy Organic Valley at Whole Foods, but anything I can replace with local goodness I'm going to... so I bought this not thinking it would taste any better, but because it was local.  I once ate dinner with my parents - who would not describe themselves as foodies - in some restaurant that served packets of butter with the bread, and they were totally wowed by the butter and asked the restaurant staff for the name of the supplier and all...  I don't know how far they went with that, but I don't care about butter that way.
I was wrong.  This butter is incredible.  Good enough that I've set some aside to bring to my parents.  Damn good butter.  Creamier, I think, than the store-bought kind, and more... buttery?  I don't know, it's just good butter.  I'm sure this would work with a stick of Land-O-Lakes too.. but this is better.
So I started with 4 tablespoons of butter and some flour.  I used 3/4 cup total and most of that was whole wheat but I used some white for safety - less than a quarter cup.   I bet you can go full-on whole wheat with this.  I added spices - about a 1/4 teaspoon of smoked paprika, 1/4 teaspoon onion powder and several dashes of cayenne.  ALSO SALT.  I forgot the salt at this point (I got it in later) but don't forget salt.  I used just a lil bit - two pinches?  1/16 of a teaspoon?  But if you were going to add less spices, maybe you should up the salt a bit.  These were not as salty as goldfish, but didn't taste like they needed salt. 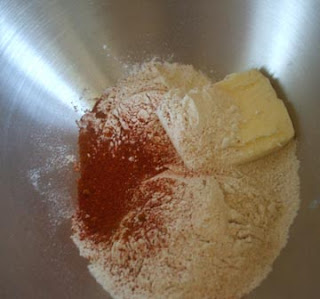 I used a cup and a half of cheese, shredded.  Honestly, the moment I decided I was making these crackers, I asked Sous Chef Brian to get to shredding.  Shredding is not my strong suit.  I used Cabot sharp cheddar.  Cabot's a co-op, you know. 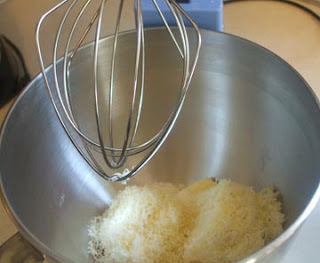 And no wet - just butter, flour, cheese and spices.  No wet.
And I turned on the Kitchenaid with the whisk attachment, and it did a great job of cutting the butter in.  It got me buttery sand.  Not dough.  Buttery sand. 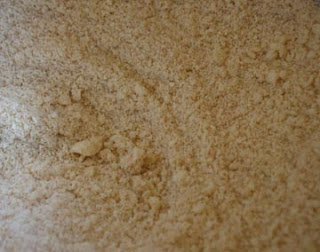 I could press on it, and it'd kind of come together, but then it would crumble.  Because it was sand.  Let me reiterate that I have no experience with pie crust.  I'm sure there are answers to this, but I don't have them.  So I wrapped it in saran wrap and pressed it that way, and it'd come together and then crumble. 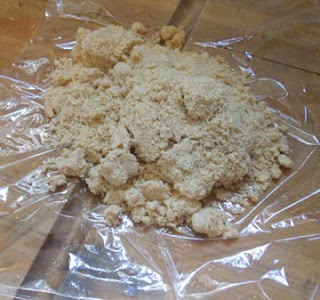 I refrigerated it a bit.  It crumbled. 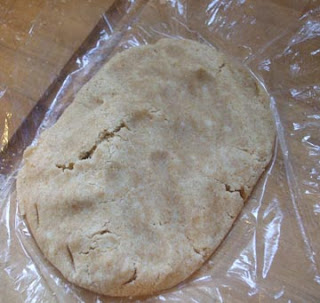 So I brought out the lil mini food chopper and did it in two batches. 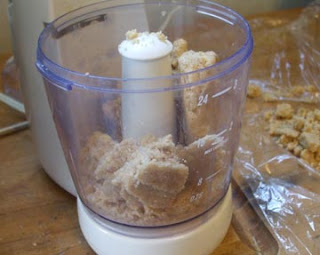 About a minute per batch.  It was at this point that I realized I'd left out the salt and I added that in.   And it worked.  It came together as a dough. 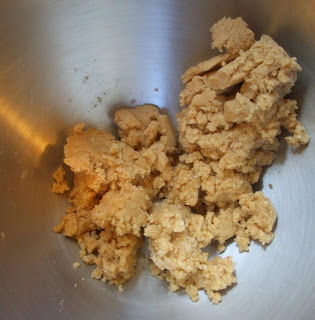 I laid out some parchment and preheated the over to 350.  I divided the dough into manageable handfuls (thirds) and rolled it out.  The thickness ranged from like a dime to like a nickel, but the results were awesome in both cases, so I wouldn't worry about this. 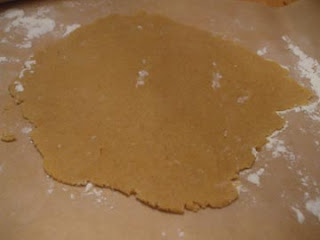 I had a small round cutter - I have this set of round cutters for biscuits and cookies and such, so I used that, but you could just as easily cut it into squares (ok, that'd be easier) or get all cutesy with an animal shape.   I used the 7/8" one. 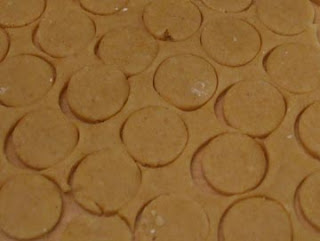 And then carefully transferred them to a baking sheet lined with parchment. 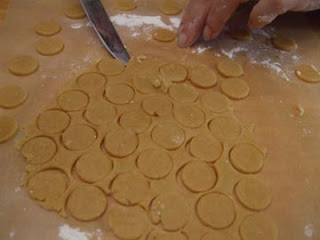 Where Sous Chef Brian was at the ready with a skewer to dock each one. 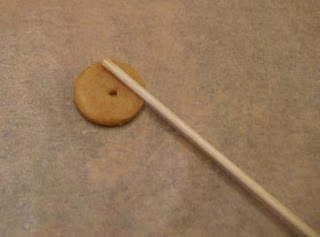 This made two full sheets of crackers, about 150 small crackers.  That sounds like a lot...it's not. 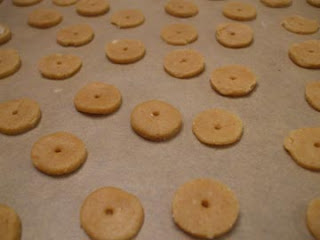 I put them in at 350 for 12 minutes (the second batch took longer, about 15) until the edges were golden.  I used a white cheddar, so they never got all plastic-y orange, but orange cheese would get you closer to that.  So they were pale and beigey with a hit of goldenness. 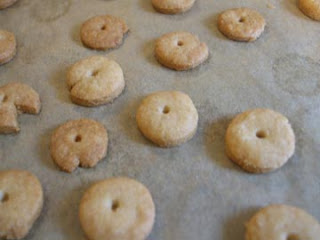 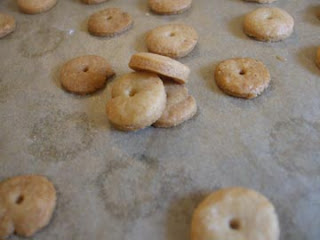 150 tiny crackers, after a bit of sampling, is enough for 2 small jam jars.   Not a ton of crackers. 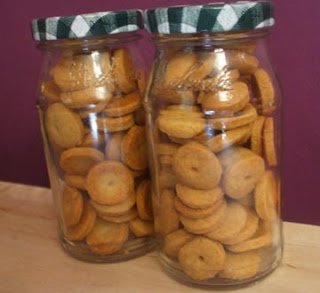 But what did they taste like?  Cheese. They taste like awesome tangy cheese.  More cheddary than a storebought cracker, with a hint of spiciness.  Like my homemade mac and cheese.  They weren't crispy, per se, but crunchy... you crunch in and they're flaky inside (not unlike a Cheez-It) and they're awesome.
Was it worth it?  It took about an hour from idea to jars... the cutting out took the most time, and making squares or triangles would cut that down.  These are the best cheese crackers I've had, so that's a plus, and they're made of food, so that's huge too...  but they weren't cheap.   You could make them with cheap cheese and cheap butter and probably pay less than what you'd pay for Goldfish or Cheez-its, but I used about $3 in cheese and $1.50 in butter and a negligible amount of flour and spices, and I got 6 oz of crackers, which is close to the 6.6 oz you get in a bag of Goldfish.  But a bag of Goldfish sells for about $2.25, and this cost twice that. (If I had rolled out that last bit of dough at the end, the bit that was made up of scraps and might not have quite fit onto the baking sheet, I'd probably be at 6.6 oz)

I'll do this again.


Ever re-create a storebought snack, or have one you're itching to try?  Tell me about it in the comments.

Whole Wheat Mac and Cheesy Crackers - adapted from Smitten Kitchen
by Saturday's Mouse May-9-2011
Homemade cheese crackers with just a slight kick
Ingredients
Instructions
Add all ingredients to a food processor (lil mini chopper works too) and whirr until soft and moist. Form a ball with your hands. Preheat to 350. Roll dough out on parchment (thickness of a dime, nickel is ok) and cut out shapes. Easy shapes reduce prep time. Bake 12-15 minutes at 350 until just golden around the edges.
Details
Prep time: 30 mins Cook time: 15 mins Total time: 45 mins Yield: 150 crackers
Posted by Rose