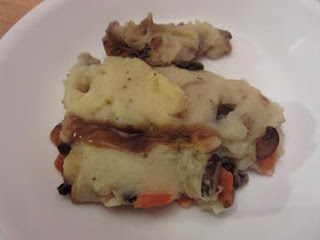 A quick Google tells me that vegetarian shepherd's pie is called "shepherdess pie."  That upsets me.  I don't understand the feminization of healthier foods.  Men eat meat, women eat vegetables.   It reminds me of this ad for a masculine version of diet soda.


I started this story last week, here, with my vegan garlic mashed potatoes.  Mashed potatoes without butter and milk are pretty easy; you use stock instead.  This dish has been called "Swanson Mashed Potatoes," so I'm guessing it was Swanson chicken broth's idea.  Or they popularized it.  But you can do it with vegetable stock* too.  I added roasted garlic to make it a bit richer.

Let's imagine we all cooked together and you've got some taters to start with.   Next, clean out your fridge.  I was inspired to do this when I thought my fridge had stopped working, and I found homes for my dairy and whatnot, but there wasn't enough space for the veg.  I rescued my foods in order of cost.  So I had carrots and turnips and mushrooms in the fridge, and also potatoes and onions.  Shepherd's pie.  I made a meat version 8 months ago, burned it, and I offer this link only for a laugh. 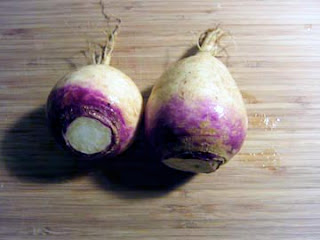 I started with my carrots and turnips. 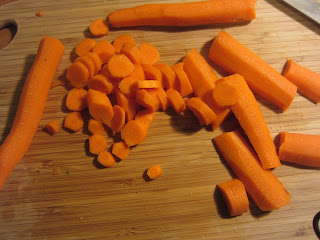 I cut the carrots into rounds, and cut the thicker rounds in half.  Then I diced my turnips fairly large. 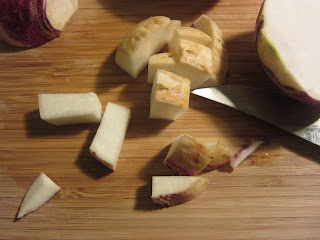 Luckily, I was only about halfway through the first turnip when I realized they needed to be peeled.  That's the drag about cooking seasonally... I haven't seen a turnip in a long time, and I think I forgot how they work.  Turnips do not lend themselves to vegetable peelers.  You need to use a knife. 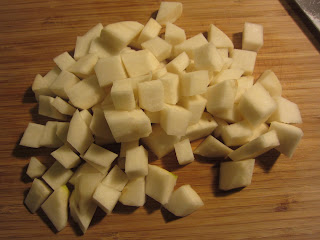 I turned my oven to 400 and set my veg to roast.  First, I spritzed them with a bit of olive oil. 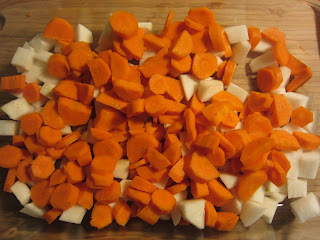 They were going to be a while, so I took this time to make the gravy. 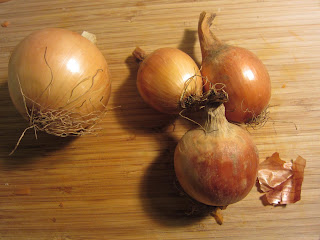 Only three of these made it in (one was scary) and that was plenty of onion.  Diced up. 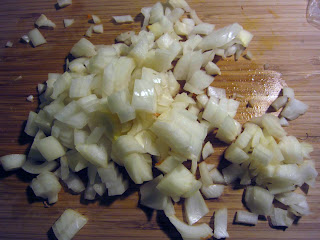 I cut some mushrooms into various sizes.  I wanted some to almost melt into the gravy and others to provide a bit of texture.  I used about two and a half cups of cut-up mushrooms.


I got the onions going in a tablespoon of oil, and when they were translucent I added the mushrooms.  I gave them just a few minutes to toss around in the heat on medium and then added stock and wine and black pepper.  A cup of stock, a quarter cup of red wine, and a lot of black pepper. 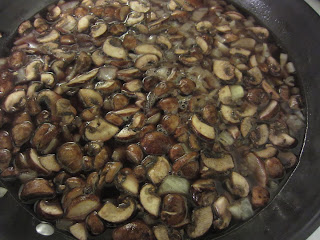 I dialed that up to a constant bubble but not really a boil, to reduce and thicken, and let it go for half an hour while the vegetables roasted.  When it was thicker but not quite thick enough, I added some flour and stirred vigorously.  I'd have whisked if there weren't mushrooms in the way.


The veg were done after they'd been in for about 40 minutes.  They were wrinkly and getting crisp around the edges.  A creative person would do something with the fond here on the bottom of the pan.  I did not. 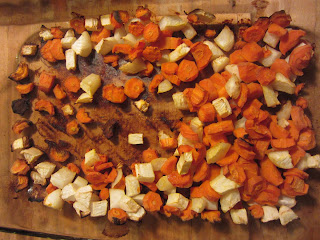 Instead, I added some fresh thyme. 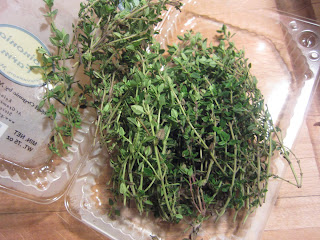 And mixed that with the roasted veg.  I actually transferred it to a larger pan at this point, too. 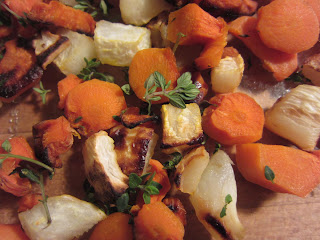 I poured the mushroom/onion/gravy mix overtop and mixed that together. 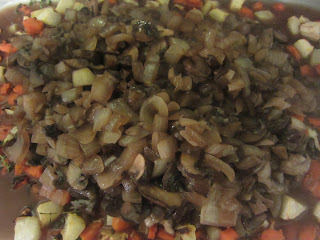 Then I got out my potatoes.  I had mashed up four smallish potatoes and had about four cups.  "Recipe" here.  I tossed all of that on top of the "stew." 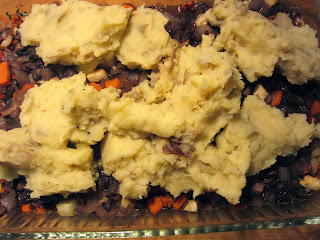 And spread it around with a spatula. 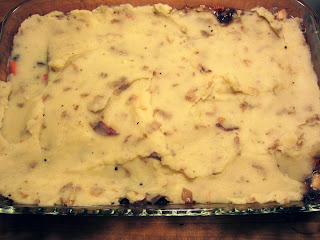 Everything was cooked at this point, so we just needed to get it warmed up together and get those potatoes just a little toasty on top.   10 minutes at 350.

When it was done, it was just golden along the tops of the peaks.

There was a decent stew-to-potato ratio, but that isn't obvious in the later pictures.  On a plate it looks like mashed potatoes that were exposed to some vegetable stew. 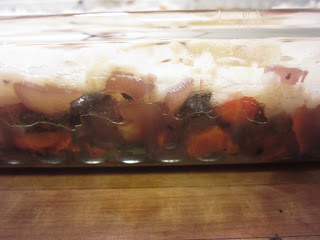 It looked a bit of a mess on a plate, but was hearty and flavorful.  The carrots were just sweet and the gravy was rich and mushroom-y. 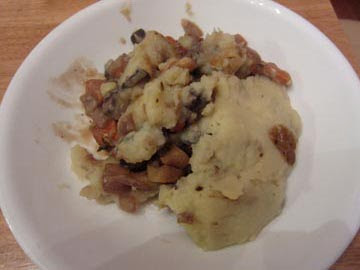 It doesn't cut cleanly, it's stew, with potatoes on top.


I had to rush home from a South Philly Food Co-op member meeting to get this post together.  It was really inspirational to see a room full of the founding membership and some potential members.


This recipe is cross-posted at the blog for the South Philly Food Co-op, whose mission is to open a member-owned cooperative grocery store that provides affordable and nutritious food to all residents of South Philadelphia while empowering the local community through sustainable practices, food-centric education, outreach, and community building.  Become a member-owner by filling out the application here.


*Just a note - my homemade veg stock has no salt, so if you're using something not-homemade, use less salt in the recipe.  Or none.

Vegan Shepherd's Pie
by Saturday's Mouse October-18-2011
Just as hearty and satisfying as meat versions, this tastes like fall and comfort, all under a bed of mashed potatoes.
Ingredients
Instructions
Peel and dice turnips, slice carrots, spritz with olive oil and place in preheated 400 degree oven in a baking dish. Leave for 40 minutes while you do other things. Put 1 tbsp of oil in a saute pan and heat to medium. Add onions and saute until translucent and fragrant. Add mushrooms to pan and toss for a minute or so before adding stock and wine. Simmer pretty high, not quite boiling to reduce and thicken. When carrots and turnips are crisp at edges and wrinkly all over, sprinkle flour over mushroom/onion gravy and stir vigorously.Add mushroom/onion gravy to roasted vegetables, with optional thyme. Arrange in large baking dish. Top with mashed potatoes (I used 4 potatoes, skin on, 3/4 cup stock and one head roasted garlic). Bake at 350 for 10-15 minutes until potatoes are slightly browned at peaks.
Details
Prep time: 10 mins Cook time: 1 hour Total time: 1 hour 10 mins Yield: 6 servings
Posted by Rose