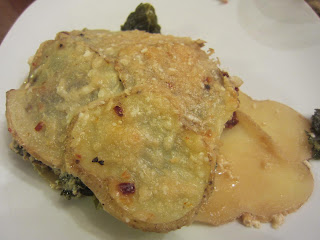 I've had less time to spend in my kitchen lately, and it shows.  My fridge is still hooked up by extension cord, the eggs are still in the mini-fridge, and the dishes have lingered.  Not in the creepy, crusted-on food kind of way, it's more like there's an accumulation of plastic baggies to be washed out, and jars that need their labels removed for storage, and lunch bags that have really reached the end of their useful life without a good cleaning.  Just neglected kitchen and food related maintenance.  In the next two weeks I'll have even less time to do that, so I'll cook when I can, and show it to you when I can, and we'll be back on schedule soon enough, but I don't think I'm going to the grocery store before November.


But we still eat.  I mentioned in my CSA post the other day that I had hasselback or accordion potatoes on my mind.   I guess it was just thin slices I was excited about, because a few nights ago I made scalloped potatoes.  Scalloped potatoes aren't something I make a lot of, but neither are potatoes in general.  I think I wrote about my unsubstantiated fear of them a few months back.  They just seemed so unnecessary, like that side of starch that was mandatory on our plates growing up.


Several months ago, my friend Kristina shared a picture of her family's au gratin potatoes, and I was like "Whoa, must make," and she was all, "You sure? It's a pound of cheese," (Ok, I'm paraphrasing) and I was like, "Hell yes."  And I've been staring at that recipe since May and yeah, I'm never going to make it.


The first thing I did was steam up that kale.
And by "steam," I mean "microwave." 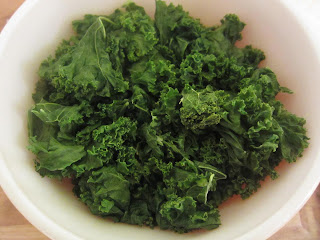 Also, I set a small handful of sundried tomatoes to soak in Very Hot Water.   Get the kind that aren't packed in oil, and yeah, they need to hang out in hot water to stop being raisins, but they're not packed in oil. 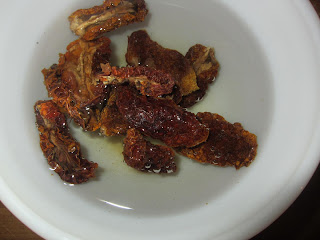 And two potatoes.  These aren't huge potatoes, and honestly, I was surprised how little food I used to make this.  Does that sound weird?  I mean, I can imagine having a potato and a half a bunch of kale and some sort of protein on my plate and eating that for dinner, but in this case, two potatoes and a bunch of kale and a few accessories made six servings. 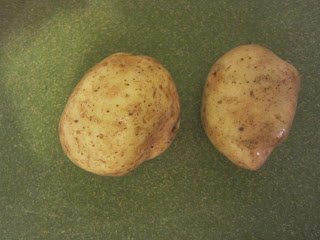 I don't have pictures of me slicing these with the mandoline, because I don't like to do tricks while I'm slicing things.   I'm a believer in gloves like these for mandoline use, but please don't go trusting me on that and slicing off a finger.  It works for me.   I'm sure you could use a knife.  I'm sure your knife skills are better than mine.


I sliced them this thin.


At this point, I turned the oven to 450 and started making sauce.


I have no fresh garlic on hand, but I always keep the frozen kind around, just in case.  So I used three cubes of frozen minced garlic.  Use whatcha got, and as much as makes you happy. 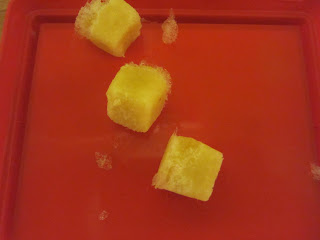 And a cup of skim milk. 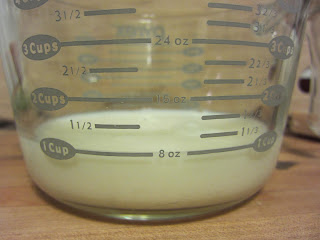 And about two and a half tablespoons of sour cream.  I used this because I had it, and it needed used.  If you were to use whole milk, maybe you could skip it. Or maybe add some regular cream.  Or creme fraiche.  Or whatever you have. 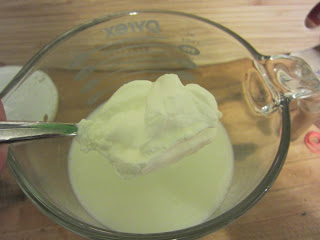 And all of that went into the microwave, mostly to defrost the garlic but also to warm it all up.  I set it on defrost.  You could heat it on the stove too, I just didn't want to dirty a pan.   I'm not a big believer in the microwave, and when this one has finished it's useful life I don't think I'll buy another.


Whisk that together with some spices.  I used about a half teaspoon each of black and red pepper. 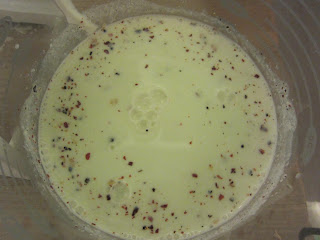 Also cheese.  I grated up about a cup of parmesan. 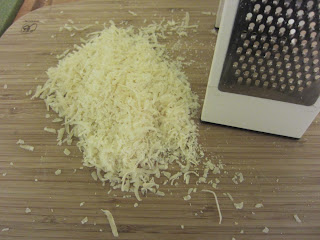 And buttered my baking dish. LIBERALLY.  Like, yeah, there was extra butter in the bottom and I kept it.


I used a small baking dish.  Use the one that's appropriate for the amount of potato you're using. Yeah, that probably goes without saying, I mean, you're not a fool, but I don't know, you scroll through the comments on recipe sites and people are like, "How would you do this if you didn't have chard but used spinach instead?" and the answer is, "Just use the freaking spinach."  But no one says that.  Because food people are polite. So use the thing that's right for the thing you're doing.  Something flat-ish. With sides.


And then it's like lasagna, or strata or whatever else you layer.  Start with potatoes. 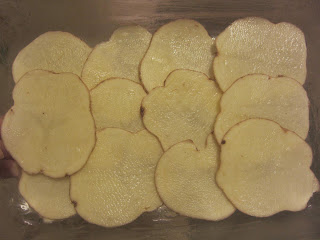 Add half the kale and sundried tomatoes.  I tore the kale up with my hands (I stemmed it before I "steamed" it) and I went after the tomatoes with my kitchen shears. 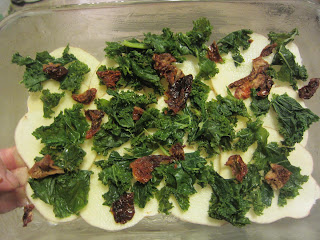 Sprinkle on a third of the cheese. 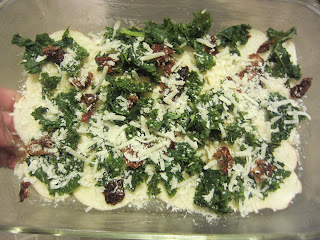 Then another layer of taters, the other half of the veg, another third of the cheese.


Then another layer of taters - stop.


Pour the sauce (the milk and such) over the potatoes.  Shake the dish a bit to make sure it gets into all the crevices. 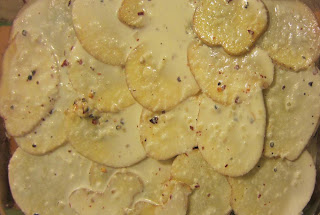 And cover the dish with aluminum foil.  I don't use a lot of foil, and maybe don't pay enough attention to my foil supply.  And haven't been grocery shopping.  So I found this. 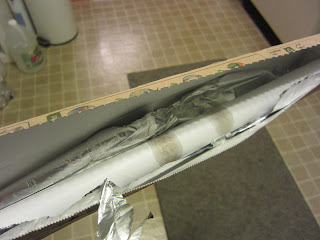 Scavenge up some foil and cover the dish.  Bake at 450 for 30 minutes, or until taters are tender.


Unfoil the dish and add that last third of cheese to the top.   Dial up to broil. 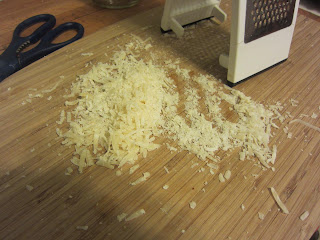 Watch it.  Stare at it.  I've burned lots of things.  Keep looking.  I was aiming for just crispy on top, bits of golden.  I went four minutes uncovered, but I don't think my oven had really had a chance to get to "broil" when we went back in. You could go for a more even brown on top if you want.  I didn't want.

I served it was a main dish, but really, I'm not one to make a lot of dishes.  It was creamy throughout and crispy on top.  The tomatoes were zesty and the kale had taken on the pepper from the sauce.  Taking leftovers for lunch, this has made six servings.  Not bad for two potatoes and a bunch of kale. 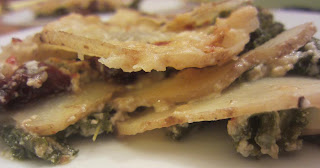