What sort of pizza you have varies a lot by your neighborhood.   When we lived in the suburbs, pizza was like meat or veg on dough, and that was pizza and it was fine.   The farther north we went (read: Jersey), the better a plain slice of pizza got.  Then I was in the city all the time, exposed to things like buffalo chicken pizza and white pizza and pizza with dollops of ricotta and (seriously) french fry pizza and such, but Sous Chef Brian didn't see these things.   By the time we moved to the city, I was horrified by all the misc foods folks were putting on pizza, but there was still fancy pizza.  Pizza with asparagus and feta, or with fennel and blue cheese, or with figs and prosciutto.  Fancy pizza was a whole new thing.
We've made far more "fancy" pizzas than we've ordered.  If we're ordering pizza these days, it's probably a whole wheat "caprese" pizza, which is basil and chunks of mozzarella, but if we're making pizza, it's whatever veg or meat we have in the house plus some interesting cheese.
So several months ago I suggested we call up the known "fancy" pizza place, and Sous Chef Brian was like, "Yeah, let's get a plain pie and compare it to what we usually get."  But I talked him into fancy.  So we got a fig and prosciutto pizza, and in the end he said he liked it, but it had too much fig.
Neither of us had really ever eaten fig outside of Newton format.  I don't think either of us had ever eaten prosciutto outside of hoagie format.
So I was thinking, if the fig was less about chunks of dried fruit, and more about a thin layer of fig everywhere, this might be the kind of pizza we make.  I kept the idea of fig jam in the back of my mind.  Did it even exist? This past weekend I saw fig spread at Whole Foods and it was time. 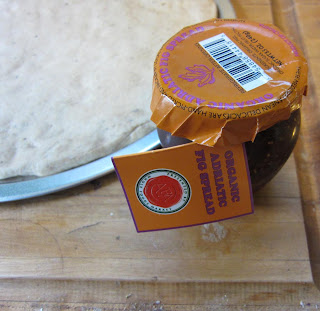 Credit time - I thought of the jam/spread thing all by myself.  Then I was a'Googling to see if the prosciutto should be baked the whole time with the rest of the pie, or go on at the end, and I saw that The Pioneer Woman had made exactly the pie I intended to make with the same fig spread.   We had different cheeses, but still, the same fig spread, so I won't post my "recipe", and I decided to steal her idea for arugula.
Alright, let's make pizza.  I preheated the oven to 500 (in this heat!).
We had won a dollar store pizza pan as part of a prize package in a neighborhood raffle, and I thought it was time to give it a shot.  This is the roundest pizza I've ever made.  Most of mine are amoeba shaped, or like Rorshach tests.  Rustic.  Thin.  Haphazard.  But this time I took my standard dough recipe (I had it in the fridge) and pressed it into a circle on the pizza pan.   This was, after all, fancy pizza. 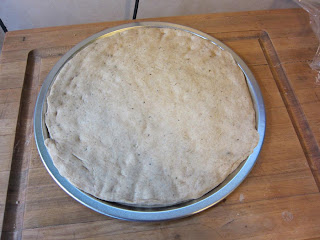 And I spread a thin layer (maybe 3 tbsp) onto the dough. 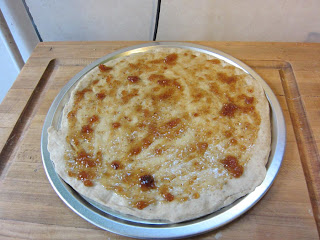 And I put it in the oven for as long as it takes to shave fontina.  That's a while.  Thanks, Sous Chef Brian.  I didn't have the patience for sticky, falling apart cheese. 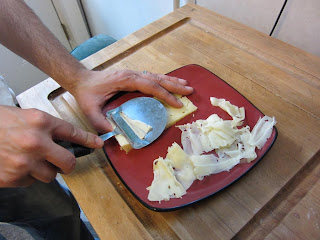 So after about 5 minutes of baking and painstaking cheese shaving (followed by giving up and tearing cheese into chunks), we took the pizza out and cheesed it up. 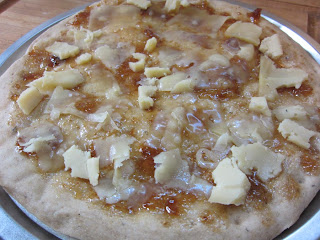 Then back in while we got the prosciutto out and tore it up, another 2-3 minutes until the cheese melted. 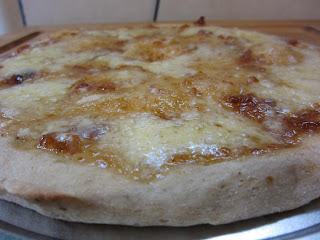 Then we topped it with the meat.  I said earlier that I Googled to see when the prosciutto should go on, and there was conflicting info out there.   The aforementioned Pioneer Woman recipe says it goes on after, but I wasn't sure, so I wanted to give it a bit of a headstart in the oven, without overdoing it.  So the crust had already had 7 or so minutes on and off and the cheese had already melted when I topped it with the meat.  This is two slices of prosciutto. 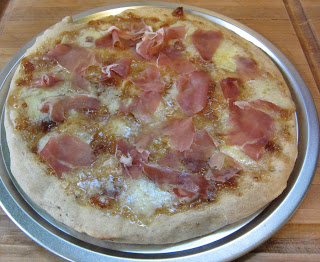 And it went back into the hot oven long enough for me to get out and wash the arugula (2 minutes). 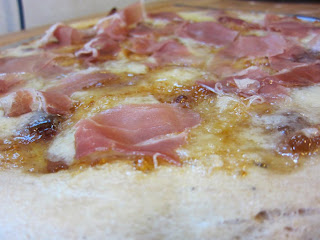 The prosciutto was warmed throughout and had crisped a bit in places but was more melty than anything else.
We topped it with a giant handful of arugula and that was that. 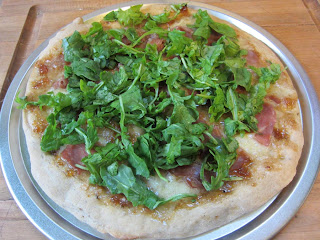 I loved it, but Sous Chef Brian still thought it was a bit too figgy, so there is an unphotographed adjustment - on top of this we added two more slices of prosciutto to combat the sweetness a bit.  So four slices of prosciutto total.
The base is sweet and sticky, and the meat and cheese are salty and the arugula doesn't seem as peppery and sharp as it does in a salad, but it's like it tempers all that sweet and salty flavor so it doesn't overwhelm.
This was fairly expensive - we used $5 of fontina, plus 4 slices of prosciutto, which we really need to start buying in less than 1/4 pound sizes, because now we just have leftover prosciutto again, plus a $5 jar of fig spread - plenty leftover, but I can only imagine using it for this pizza again, plus the arugula... so it was like a $10 pie (factoring in leftovers), which is a lot like ordering out.   I'll still make it, when I have the time.
Posted by Rose