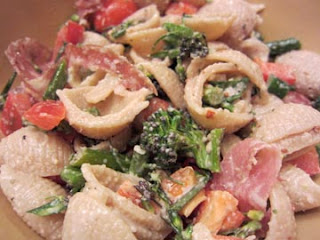 Thanks for the suggestions on how to use the farmshare veg.   I had a suggestion here for scape wontons(!!) and a scape cheeseball, and on Facebook I got a recommendation for scape pesto (of course) and a lesson on how scallions work.   It's in the high 90s these days and heading to 100 today, which is upsetting, and so per my half-joking plan of making this a week of pasta salads and salad salads, I started with pasta salad.
Pasta salad, like pizza, egg rolls, omelets, is a great place for whatever you've got.  I don't think I ever make two that are exactly the same, and so I don't expect anyone to follow this like a recipe.  That's not how pasta salad works, at least for me.  I'll post the dressing recipe. But put things in your pasta salad like what I put in this one, and it'll be like this one.
It was hot enough today that boiling water for the pasta seemed like a serious burden, but that's the first thing I did, a half pound of pasta.  Then I made the dressing.
I don't have pictures of the dressing process, because I switched vessels midway through and the photos were seriously unappetizing.   I made a creamy shallot vinaigrette and then added parmesan.  You could add the parm directly too, I'm sure, but I just added it to the salad.
I started with vegeanaise (you could use mayo, sour cream, yogurt) and red wine vinegar - equal parts.  About three tablespoons each.   I added a half tablespoon of grainy mustard (this stuff is all seeds) and about a quarter tablespoon each of onion powder, dried oregano, red pepper flakes and black pepper, as well as a sprinkling of salt.
Sous Chef Brian minced up a pretty big shallot and all of this got whirred together with the immersion blender.  If I didn't have that, I'd use my mini chopper, and if I didn't have that, I'd put it in a jar with a lid and give it a serious shaking.
It looked this unpleasant - this is why there aren't photos:
So, in making pasta salad, my first priority is to get it cold.  I had boiled up some small shells, and I rinsed them with cold water and then poured the dressing on top.
I like to use either shells or oriecchiette. 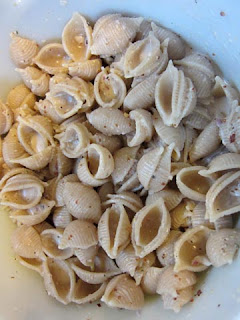 Throw that in the fridge while you get everything else ready.  Sure, it'll be better tomorrow, but it'll be cold and just fine tonight for dinner.
We got some garlic scapes going.  I understand that 9 times out of 10, there will be no scapes for this.  You might want to use red onion, which does not taste anything like scapes, but might add a bit of the bite. 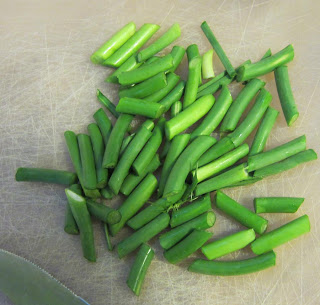 Sous Chef Brian chopped the scapes and sauteed them very briefly in a good bit of oil to tone the flavor down a bit.
We diced up a red pepper and then some broccolini, cut up small.  Later, I asked Sous Chef Brian what he thought of the broccolini in place of broccoli and he said it was "too sharp" texture-wise.  I was happy that it did such a great job of dispersing through the salad, but apparently it's too pointy.  So choose wisely. 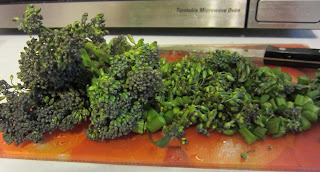 So we added the veg (scapes plus the oil they cooked in), broccolini, red pepper and some grape tomatoes to the pasta salad.
I cut up some salami into ribbons and added that in.   About five thin slices of salami.   Fun story (not really), we were at Whole Foods and I asked for some pepperoni for this, and they deli guy gave me a piece to taste and it was foul - like burned and weird, and I mentioned this, and he wondered out loud whether he had given me salami or chorizo, and then another guy came and tasted it and there was this hot debate and pretty much I had to tell him I didn't want the meat.  So I went with salami. 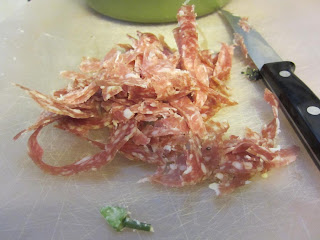 Add cheese too.  I grated up a good bit of parmesan, and again, you could do this in the dressing, but I was afraid it'd get too thick and clumpy, so I added it later.
Of course, you could do this vegan or vegetarian.  We used vegan dressing anyhow (clearly, the recipe below includes cheese and is not vegan).  I would think that if you pulled out the meat, you'd want to add something with a good bit of flavor (olives, sundried tomatoes, capers, pepperoncini etc) and if you pulled out the cheese you might want to add two flavorful items. 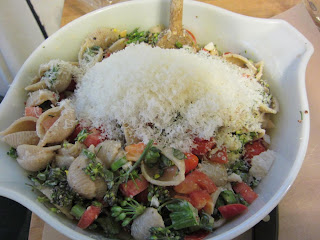 We had intended to add a couple of zucchini, but the bowl was pretty full at this point so we held back.
We gave that all a good stir, and a quick drizzle of red wine vinegar and sent it back to the fridge to meld for an hour.   The flavors develop and combine in time, so if you can make this in advance, more power to you. 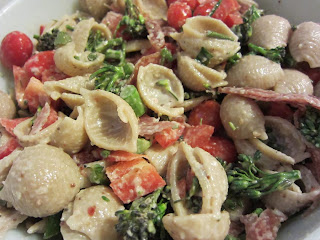 This made what we're going to functionally call 6 meal-sized servings, but probably, nutritionally, should be 8.
print recipe