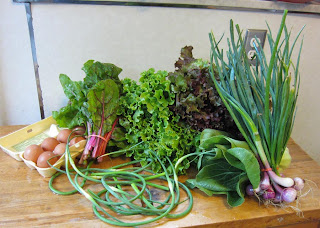 Last night was my first CSA pick up of the season (yay!).   I had been so nervous - last year in the beginning I was so overwhelmed with serious greens that I spent hours blanching and freezing in the early weeks.  I think since this one started a full month later than last year's, maybe I avoided some of that.  It was a pretty easy veggie prep night, which was great, because it meant I got to give everything a good wash and run out the door with Sous Chef Brian and our Mystery Sunday Night Dinner Guest for a Craigslist shopping adventure.

Our half share included:
A dozen farm fresh eggs. 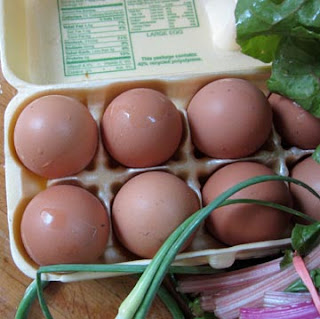 At first I was a bit freaked when I saw they were in a styrofoam container marked, "Weis Markets."  I thought to myself, "somebody ran out of eggs."  But I was relieved to see this carton would have expired in November 09, so clearly this is a well-re-used carton.   My parents were recently commenting on their own surprise when they got farm-fresh eggs for the first time in a while, at the color.  Fresh eggs have nearly orange yolks.  It's mostly wasted on me, because I make egg white omelets and pluck my hard-boiled yolks straight into the trash and save the whites, but I appreciate being able to look at an egg and know it's that fresh. 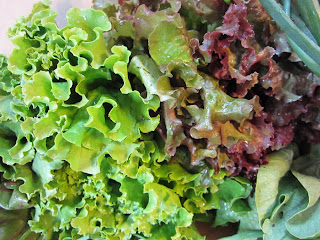 Lettuces.  Two kinds of lettuce counts are 2 of my 6 items (eggs are extra).  Two heads of something green and one head of red leaf.  This was a huge relief.  I hate when I get a box and there are plenty of veg but nothing for salad, and then lunch is hard.   Big, fluffy heads too, not like the scrawny $5 heads of romaine at the farm market last week. 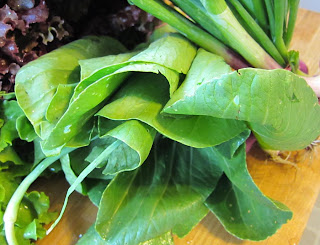 Baby bok choy.  Ok, it didn't want to pose for a picture.  Two good sized heads of baby bok choy.  Our Mystery Sunday Night Dinner Guest was surprised at the color, green throughout, slightly paler at the bulb.  She's used to white bulb and dark green leaves.  (it's because it's baby bok choy). 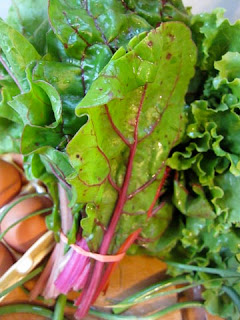 Chard.  I'm not going to look this up, so ya'll can feel free to correct me, but I'm thinking that red stalks are "red chard," yellow and red and white, etc are "rainbow chard" and the white ones are "swiss chard"?  I don't know.  These are red.  They all taste the same, or close enough that I can't tell a difference.  I almost always buy the red. 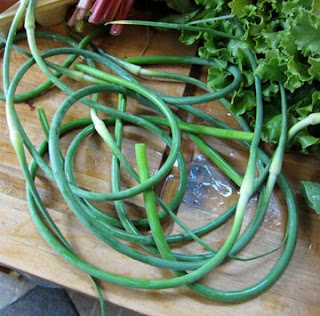 Garlic scapes.  Garlic scapes are elusive.  They're only around for five minutes and people fight over them.  Last week at the farm market there was one scape when I got there (that's like one scallion, or less even).  It's like the great freak-out over ramps.  Slightly funny story: when I saw we had them, I got excited and told our friend that they were garlicy, but not hot, and broke her off a piece to try.  At the same time I put a piece of raw scape in my mouth and realized these were way more flavorful than I had remembered.  I ate an oatmeal cookie immediately afterwards and still felt like I had eaten a giant bowl of shrimp scampi.   These are pretty neat though.  It always feels like you can get a ton of scapes all in a week or two span and then never again, so maybe you over-buy and have to eat nothing but scapes for a while.   I still have some frozen scape pesto from what must be exactly a year ago.   Ooops. 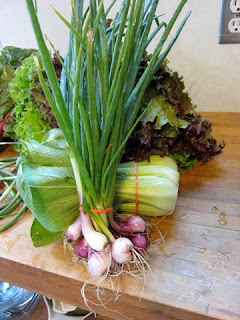 Scallions?  I Googled "purple scallions" and saw there is such a thing.  Are these purple scallions?  Photos I'm seeing on teh Internets look less bulbous.
I guess that brings me to the only downside of this week's CSA pickup.  I had no idea what was coming, and no one to ask.  I'll use the scallions like any other, but what if they develop magic properties when soaked in balsamic vinegar and I have no idea?  Or the scapes, what if I had never had scapes before - how would I know what they are or what to do with them?  Not like any of this stuff was a posionous blowfish, but still.   It'd be nice to know what everything was and what they recommended we do with it.
Still, we're pretty happy with the haul and glad we switched from a whole share (8 items) at our old farm to a half share (6 items) at the new one.
So, readers, I need your help.  Any idea what to do with all of it?
Posted by Rose